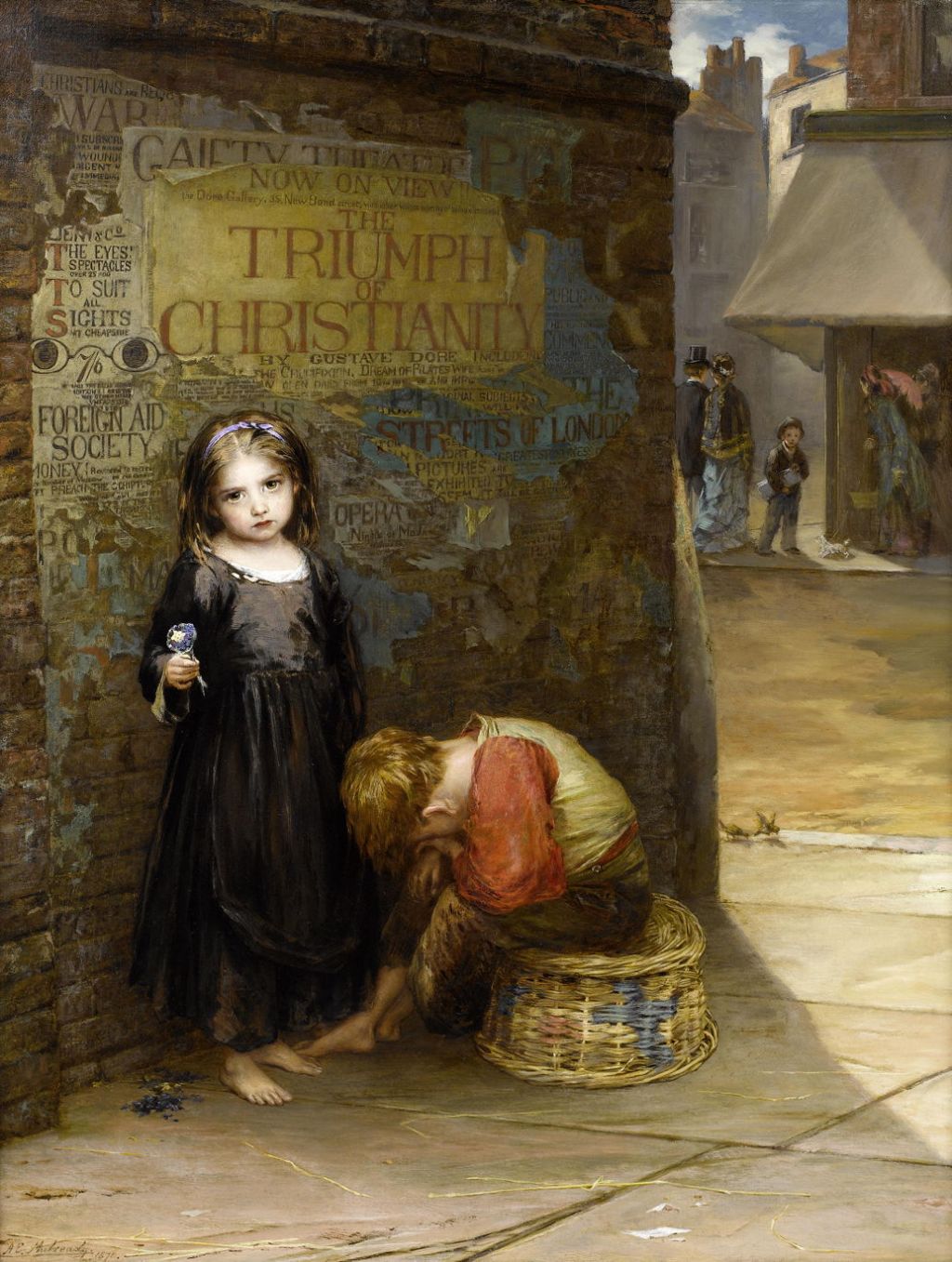 In the first article, I looked at paintings of three classical myths which tried to enforce the principle of hospitality to strangers by warning people of the dire consequences of failing to respect it: Atlas was turned to stone, people were drowned in a flood, and others turned into frogs.

There are also many examples of hospitality given in the Old and New Testaments, although these start to reflect changing values which perhaps anticipated more modern codes.

Henry Ossawa Tanner’s painting of Abraham’s Oak (1905) shows an ancient oak tree, which only died in 1996. Tradition (if not legend) holds this to mark the place where three angels appeared to Abraham, or Abraham pitched his tent. The location is just southwest of Mamre, near Hebron, and its story runs that Abraham washed the feet of three strangers who appeared there, and showed them hospitality. They revealed themselves to be angels, and informed Abraham that his wife would become pregnant and bear him a son. This is used as an example of the importance of showing hospitality to others.

Perhaps the most revealing stories are those in the teachings of Jesus Christ, concerning Israelites whose origins were in Samaria, Samaritans, who by that time had become shunned by the Jews, which is hardly in accordance with the ancient code.

In Maximilien Luce’s Good Samaritan (1896), for example, the artist combines a brilliantly colourful dusk landscape with a classical narrative painting, showing the well-known parable of the Good Samaritan from the New Testament, in which a Samaritan gives aid to a traveller who has been robbed and beaten up on the roadside. Jesus uses this to explain who your ‘neighbour’ is, a key point in the obligation of hospitality.

Less well-known is the story of Jesus and the Samaritan woman at the well, told in the Gospel of John, chapter 4, verses 4-26, in which Christ arrived at a well in Samaria, tired and thirsty after his journey. A Samaritan woman came to draw water, and Jesus asked her to give him a drink. That surprised her, as at that time most Jews would not have spoken to a Samaritan like her. They then became involved in conversation, in which Jesus preached to her, and revealed himself as the Messiah.

Henri-Jean Guillaume Martin’s Christ and the Samaritan Woman (1894) depicts this using fine brushstrokes rather than the dots of ‘pointillisme’ to build colour and form, and in places those strokes have become organised in the way that Vincent van Gogh’s rather coarser strokes did.

More startling still is Odilon Redon’s Christ and the Samaritan Woman (The White Flower Bouquet) from about 1895. In this unique interpretation Christ appears to be holding a bouquet of white flowers for the woman. There are other adornments, such as the elaborate floral object between the two, and a bright blue object high above Christ’s head. Both the figures have their eyes closed.

The brilliant Polish artist Jacek Malczewski cast himself in the title role of his Christ and the Samaritan Woman from 1911.

Hospitality to strangers has been a recurrent theme in the lives of many different saints.

Bartolomé Esteban Murillo painted a particularly apposite scene in his Saint Thomas of Villanueva (Villanova) Dividing his Clothes among Beggar Boys from about 1667. This shows a story from the childhood of Saint Thomas of Villanueva de los Infantes (1488-1555), which claims that when he was a child, he often came home naked, having given all his clothing to poorer children. Thomas became a friar of the order of Saint Augustine, and was famed for his care of the poor when he later became the Archbishop of Valencia.

Thomas is the boy in the clean white shirt to the right of centre, who has just given his jacket to the boy to the left, who is dressed in dirty rags. It looks like Thomas is preparing to part with his trousers too. These children could just as easily have appeared in one of Murillo’s secular paintings of street life in Seville, but here tell a moralising story from the life of the saint.

The sick have traditionally been cared for by their families. But for those without families, particularly anyone away from home, there have long been charitable institutions and others prepared to offer hospitality. They could have been slaves in the Roman empire, soldiers in mediaeval Baghdad, those returning from the Crusades in Europe, or refugees crossing mountainous areas through passes.

Few early hospitals provided much in the way of medical care, which was generally expensive and ineffective in any case. Most were little more than large inns, and any care staff were usually members of religious orders. A few took in cases of transmissible diseases which had become proscribed locally – conditions such as leprosy, and plague – in an attempt to confine the disease and prevent spread. The richer you were, though, the greater the chance and desire of being nursed at home.

Jacopo Pontormo’s fresco showing an Episode from Life in Hospital from 1514 shows nuns from a religious order caring for other women, perhaps the sick from their own convent.

The rise of social realism and Naturalism during the nineteenth century provides insights into contemporary society, and its attitudes to strangers and those outcast from society.

Évariste Carpentier’s The Foreigners from 1887 shows the arrival of outsiders in a close-knit community. At the right, sat at a table under the window, a mother and daughter dressed in the black of recent bereavement are the foreigners looking for some hospitality. Instead, everyone in the room, and many of those in the crowded bar behind, stares at them as if they have just arrived from Mars. Even the dog has come up to see whether they smell right. So much for hospitality.

Although many of the paintings of vagrants made by Augustus Edwin Mulready appear over-sentimental or even disingenuous, and his models are invariably sparklingly clean and well cared-for, some had more worthy messages. His Uncared For from 1871 shows a young girl with exceptionally large brown eyes staring straight at the viewer as she proffers a tiny bunch of violets.

Behind her and her brother are the remains of posters: at the top, The Triumph of Christianity is attributed to the French artist and illustrator Gustave Doré, who illustrated an edition of the Bible in 1866, visited London on several occasions afterwards, and in 1871 produced illustrations for London: A Pilgrimage, published the following year, which showed London’s down and outs.

Naturalists like Jean-Eugène Buland took on challenging motifs with challenging readings. In Alms of a Beggar (1880), a young woman dressed immaculately in white is sat outside a church seeking charity. Approaching her, a coin in his right hand, is a man who can only be a beggar himself. His clothes are patched on patches, faded and filthy, and he wears battered old wooden shoes. Yet he is about to give the young woman what is probably his last coin. And we don’t doubt that she accepted it.

Perhaps we could all do with a good dose of mythology instead.