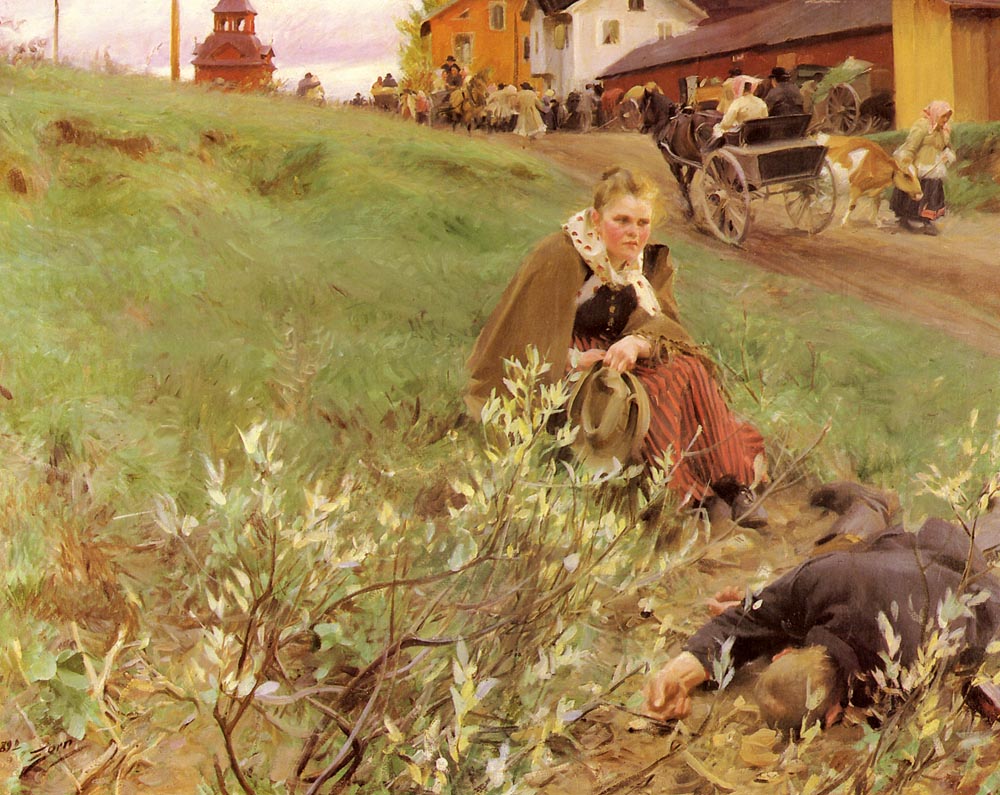 In 1890, the Zorns had continued to travel extensively, reaching North Cape at the northern tip of Europe in the summer, then at the end of the year visiting Germany. In Paris, Anders Zorn (1860–1920) concentrated on portraiture, and succeeded in attracting the rich and famous. When he had the opportunity, he returned to his favourite rural areas of Mora and Dalarö in Sweden, and painted what he chose.

In Midnight, one of his major works from 1891, he demonstrates his mastery of oils in this apparently spontaneous view painted from the stern of a small rowing boat, as its occupant steered it towards the opposite shore by the light of the midnight sun, near Mora. As with so many of his paintings, the spontaneity is deceptive. He planned each painting meticulously, with thorough preparation, like a chess player thinking through their next move. Following this intense mental rehearsal, every brushstroke in the finished work had been laid in place in his mind; applying the paint was then a brief performance to complete the act of creation.

Another painting he made in Mora that year is Sunday Morning, in which he catches two young women washing and preparing to attend church, under the supervision of their mother. He here uses his restricted palette which he first adopted when getting started in oils at Saint Ives in Cornwall, and couples that with the dazzling morning light.

Zorn’s major project for the winter of 1891-92 was another painting which appears deceptively spontaneous, Omnibus. Earlier in 1891, he had seen a colour print by Mary Cassatt of two women and a child sitting in an otherwise deserted omnibus, and it’s perhaps that which set him planning this complex composition. It takes advantage of a relatively novel and increasingly popular feature of cities like Paris. In its confines he crams five figures, including himself (wearing the top hat, second from right).

The pretty young woman in the centre of his canvas is a milliner’s shop-girl, with her hand resting on a large hatbox. She is echoed, almost in reflection, by another young woman, and between her and the artist is a young working man – together a cosmopolitan mixture of people and classes.

A second version was snapped up by the rich American collector Isabella Stewart Gardner. One of the two won praise at the Salon in 1892, and this version is now in Stockholm’s Nationalmuseum. Zorn also made etchings which proved a great success.

My favourite painting from this period in his career is another showing country events near his family home in Sweden: Mora Fair, from 1892. Against a background of crowds and carts going to and leaving the fair, a young woman sits looking completely fed up. Not far from her feet, her partner is slumped face down amid the weeds, presumably from an excess of alcohol.

The following year, Zorn travelled to the USA as commissioner of the Swedish art exhibition at the 1893 World’s Columbian Exposition, held in Chicago. Emma and Anders Zorn stayed on afterwards for about a year, which gave him time to secure patronage. One of the visitors to the exhibition was the rich and famously eccentric Isabella Stewart Gardner, who bought her version of Omnibus there. When purchasing the painting, she asked who Zorn was. When he introduced himself, she declared that they’d either quickly become enemies, or “very, very good friends forever.” To Zorn’s good fortune, it turned out to be the latter.

Just after the opening of the exhibition in Chicago, Zorn painted another woman of wealth and influence: Mrs (Bertha) Potter Palmer, who was one of the early purchasers of substantial numbers of Impressionist paintings, many from the dealer Durand-Ruelle. Her husband had started the store which became Marshall Field’s, and had large investments in a luxury hotel and property. She took an active part in the business, and in the year of this portrait was head of the Board of Lady Managers at the World’s Columbian Exposition.

After spending the winter of 1893-94 in New York, and staying at the Gardners’ home in Boston, the Zorns returned to Europe. In October, they were off to Venice to stay as guests of the Gardners once more, this time in the Palazzo Barbaro on the Grand Canal in Venice, which inspired Isabella Stewart Gardner’s home, and later her museum, in Boston.

It was there that Zorn painted this famous portrait of Isabella Stewart Gardner in Venice (1894).

He also stole some time for some more serious painting, here showing The Lace Makers in Venice (1894).

With Emma as his harshest critic and business manager, Anders Zorn was entrepreneurial in his approach to painting. He tried to encourage fellow Swedish artists to try their hands in the American market, and to help them organised a follow-up exhibition there in 1895.

The Zorn Museum site; if you ever get a chance to visit this museum, it has a superb collection of his works, and much more.