You’re probably familiar with most types of ‘crash’, from uexpected quitting of apps through kernel panics, but would you recognise a WindowServer crash? They range in severity, sometimes just freezing the display for a few seconds, but at their worst can result in unique behaviour – something I experienced for the first time a couple of days ago. This article attempts to explain what to look for, and how to respond.

The key feature here is WindowServer, a central part of macOS, which is fundamental to its GUI. Part of Core Graphics, WindowServer gathers in images of each of the windows in the system, assembles them into the composite image which will appear on the display, and passes that onto the GPU and display system. It’s responsible for working out where on the display you have clicked or tapped, thus which window will receive that event to process, and despatches that event to the appropriate app. Without WindowServer, there can be no GUI, and no handling of clicks/taps.

As you might then expect, when WindowServer and the GPU crash, everything on your Mac’s display freezes, including the clock. You should still be able to move the pointer about, but all windows are unresponsive, and your Mac is out of your control. In simple WindowServer crashes, the service is restarted after a few seconds, might catch up with some of the backlog of clicks/taps, and carries on.

Worse cases, in which the GPU is involved, aren’t so readily recoverable. What happens next might set you thinking that it was a kernel panic: the display goes black for a few moments. But instead of your Mac restarting as it would after a panic, you’re then invited to log in. During the black screen phase, the GPU may be restarted, and once it’s up and running it should resume normal function. You’ll then be logged in, and provided this wasn’t the result of a hardware fault, everything should resume as normal.

If you’re already familiar with kernel panics, this can be most confusing. Your Mac hasn’t actually restarted, but something logged you out and back in again. Could it be malware perhaps? It’s probably wisest to make sure your work is saved at that stage, close your apps down in an orderly fashion, and restart, although you could equally choose to carry on working until that’s more convenient.

The only way of confirming what happened is to browse the log – and that’s not easy. In my case, over the course of the couple of minutes in which this took place, well over 100,000 log entries were written. One way to work out what happened when is to use Ulbow’s chart feature.

Viewing all log entries over a two minute window in which this crash took place, there’s an obvious double-peak. 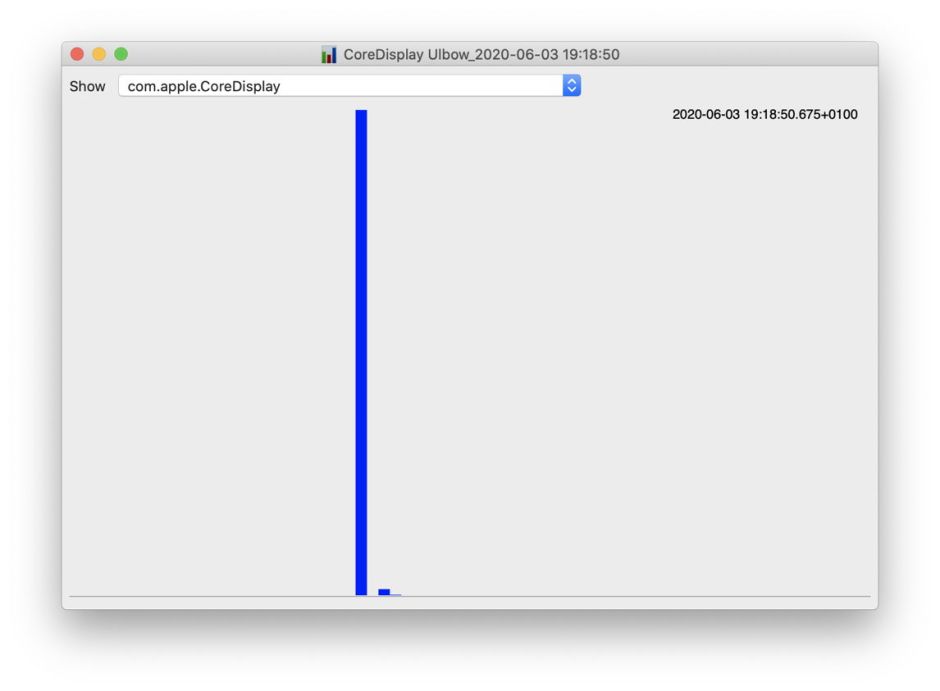 Entries from com.apple.CoreDisplay peaked earlier, though.

And there were two distinct peaks in kernel entries, one just after the barrage from com.apple.CoreDisplay, the other rather later.

The first obvious sign in the log of a problem is the start of a long succession of entries such as
20.651596 Fault kernel IOAcceleratorFamily2 void IOAccelFenceMachine::fence_timeout(IOTimerEventSource *): AMDRadeonAccelerator prodding blockFenceInterrupt
which continue frequently for a period of around 5 seconds. (Times are all given in decimal seconds.)

Those are followed by many entries reporting that the GPU driver has hung:
25.566111 WindowServer SkyLight GPU Driver for display 0x042ba88c appears to be hung (5 continuous seconds of unreadiness)
appearing every 0.005 second, and progressively counting up the time.

Individual processes are then notified of WindowServer’s death, so that they can prepare for the inevitable. For example,
34.030801 Alfred HIToolbox HIToolbox: received notification of WindowServer event port death.

I hope this doesn’t happen to you, but at least you now know what to look out for, and the evidence to seek in the log. I wonder if this is a relatively recent preferred alternative to a full kernel panic and restart.

In this case, although much harder to see in the log, I think this was all brought about by a third-party application which had a misunderstanding with the AMD Radeon graphics card driver, which in turn brought WindowServer down.