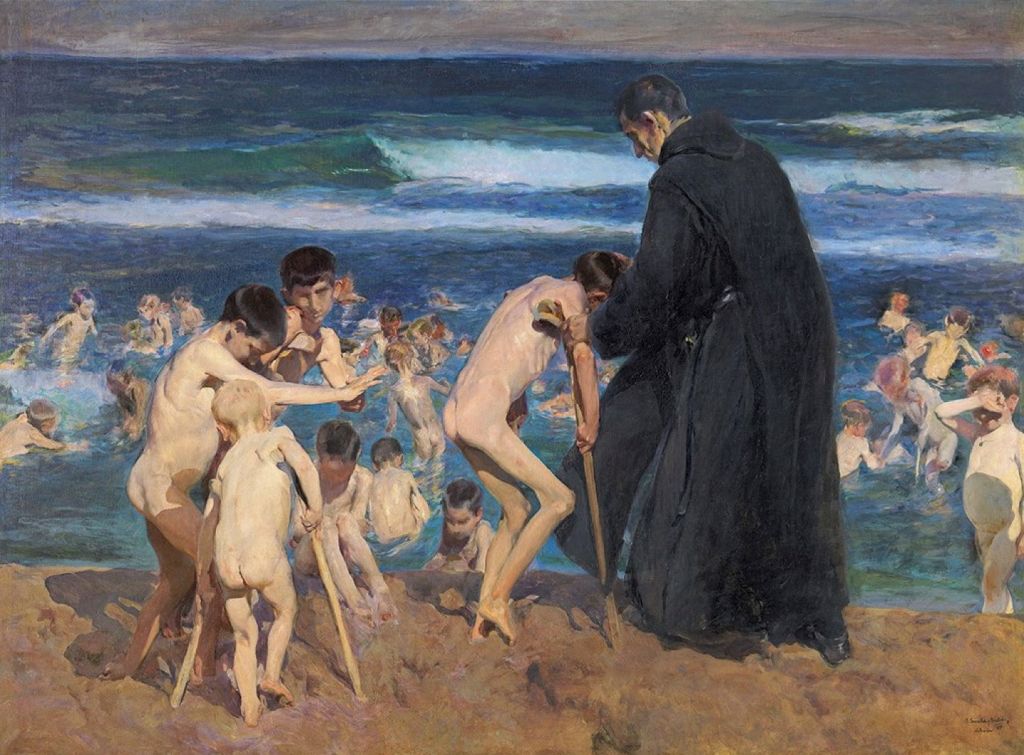 In the late nineteenth century a series of world fairs, known in French as Expositions Universelles, were held in major cities across Europe, particularly in Paris. These started with The Great Exhibition in London in 1851, following which Paris held the first Exposition Universelle in 1855, largely as Emperor Napoleon III’s response to the British. The first of the twentieth century, held in Paris between April and November in 1900, was particularly important for painting and the visual arts. It looked back at the triumph of Impressionism over the last three decades, in blissful ignorance of what was about to happen in the early years of the new century.

The large section devoted to Impressionism included works by many of the movement, from Manet to Sisley, although the surviving artists were mostly suffering the effects of their advancing years. It wasn’t expected that Auguste Renoir would be able to attend because of his severe arthritis, but after intensive ‘cures’ in spas enabled him, he was given a hero’s welcome.

According to the records of individual artists, many who had been selected by their nation to display were awarded prizes and medals. These apparently include:

That seems an awful lot of first prizes to me.

Among the most acclaimed paintings were three painted by the Swiss artist Ferdinand Hodler, who had become thoroughly Symbolist by this time. His Night from 1889-90 had first been submitted for exhibition in Geneva in 1891, but was rejected as being obscene, so Hodler exhibited it in a separate building nearby, causing quite a scandal. When he brought it to Paris a little later, it earned praise from Pierre Puvis de Chavannes and the sculptor Auguste Rodin.

Four young men and three young women are sleeping outdoors, under black blankets. In the middle of the group, a black-cloaked figure is crouching between the legs of one of the men, who is alarmed; the figure represents death. This painting can therefore be read as telling the all too common story of early death among adults at the time, notably from tuberculosis and other infectious diseases, something that Hodler knew well.

Hodler had started making sketches for The Day (1900) as far back as 1890. With its rhythmic figures and informal symmetry, it is one of the best examples of his Parallelism. He appears to have used three different models, with the woman in the centre looking much like his second wife, Berthe Jacques, whom he married in 1898.

Another established Symbolist, the Belgian artist Léon Frédéric, also proved popular. I haven’t been able to identify which of his works were exhibited in Paris, but suspect that they included this triptych Moonlight from 1898. This shows a broad panorama of the countryside at harvest time, with a full moon shining above a band of clouds. From the right, it displays each stage of the harvest, from ripe heads of grain ready for cutting, through stooks standing awaiting removal, to stubble burning in the distance, and in the middle of the centre panel the field plowed ready for the cycle to start again.

Laurits Andersen Ring’s finely detailed double portrait of Spring. Ebba and Sigrid Kähler from 1895 appears to show a mother and her daughter talking in their garden, but the two are in fact sisters. At the right is Sigrid, the year before her wedding, at the left is her sister Ebba, who was fifteen at the time. Ring uses a very light touch with the blossom and spring flowers to avoid them dominating the figures.

Ring’s magnificent full-length portrait, At the French Windows. The Artist’s Wife (1897) was another painting which was successful with the jury in Paris.

Joaquín Sorolla’s large Sad Inheritance (1899) apparently won him the Grand Prix and medal of honour at the Exposition in Paris, and another medal the following year in Madrid. Its spontaneity is deceptive: this is one of his most carefully-prepared paintings for which at least oil sketches survive.

This shows a group of young boys from a local charitable hospital enjoying a visit to the sea in the care of a ‘lone priest’, and celebrates the mission of the Hospitaller Order of St John of God, who had built the hospital in 1892 at the end of Malvarrosa Beach. Sorolla later said that he had witnessed this scene one evening in a remote corner of the beach, and once he had been given permission to paint the boys, he made an initial oil sketch from memory.

There is considerable dispute over the cause of the boys’ disabilities. Sorolla’s title implies that they result from the ills of society, implying conditions such as congenital syphilis, and the consequences of parental alcoholism. More consistent with the period and their appearance, though, would be a mixture of preventable conditions including polio, which wouldn’t have fitted as well with the artist’s social message. Whichever was true, the implicit criticism made of the state left this remarkable Naturalist painting unsold, despite its awards.

One important painting which was exhibited in Paris but which has since been lost is Henry Ossawa Tanner’s Daniel in the Lions’ Den. He was the first African-American painter to achieve international recognition.

Fortunately the artist painted a near-replica between about 1907 and the end of the First World War in 1918, shown above. This appears rather looser in its brushstrokes, and is cropped slightly differently from the lost original. Tanner had a fondness for painting lions since his student days in Philadelphia, and had at first considered specialising in the painting of animals. Some have suggested that this might be through a tenuous connection with Androcles and the Lion, Androcles being a slave who gained freedom and success.

Among the most impressive works in the whole Exposition were the frescoes painted by Akseli Gallen-Kallela of the Kalevala epic in the Finnish Pavilion. The originals were lost when the site was cleared at the end of the year, but the artist painted them again in 1928 in the lobby of the National Museum of Finland, in Helsinki. They are extraordinary works and well worth seeing if you ever get to Helsinki.

The Forging of Sampo (1928) shows Song 10. Väinämöinen returns home, and urges Ilmarinen to go to court the Maiden of Pohjola, who can be won by forging a Sampo, a mysterious talisman whose nature is open to speculation. When Ilmarinen refuses, Väinämöinen uses magic to transport him to Pohjola in a whirlwind. Once there, Ilmarinen forges the Sampo (shown here), but the Maiden declines his offer of marriage, so he returns home disconsolate.

Ilmarinen Ploughs the Snake Field (1928) shows Song 19, the first of three tasks required of Ilmarinen before he can have the hand of the Maiden of Pohjola in marriage. He has to plough a field which is full of snakes (vipers), which are shown attacking the horse and Ilmarinen, who is suitably protected by armour.

The Great Pike (1928) shows a story from the journey of Väinämöinen and Ilmarinen to Pohjola to get the Sampo, from Songs 40-41. They catch a huge pike, kill, cook, and eat it. Väinämöinen later makes a kantele (Finnish harp) from its jaws, which he plays so beautifully that all creatures make their way to listen to him playing.

With the Sampo stowed in their boat, Väinämöinen, Ilmarinen, and their crew from Kalevala set off to return home. The Mistress of Pohjola wakes up and realises what has happened. She sends the boat thick fog, a great wind, and more, to try to stop the removal of the Sampo. In The Defence of the Sampo (1928), Gallen-Kallela shows a scene from Songs 42-43, with the forces of Pohjola led by the Mistress at the upper right. Väinämöinen, still holding the tiller in his left hand, is shown with his long white beard and hair, brandishing a sword at her, and the crew fend her off with spears and boathooks.

In tomorrow’s concluding article about the Exposition Universelle in 1900, I look at a wide range of other painters, and one whose paintings didn’t quite make it to Paris.