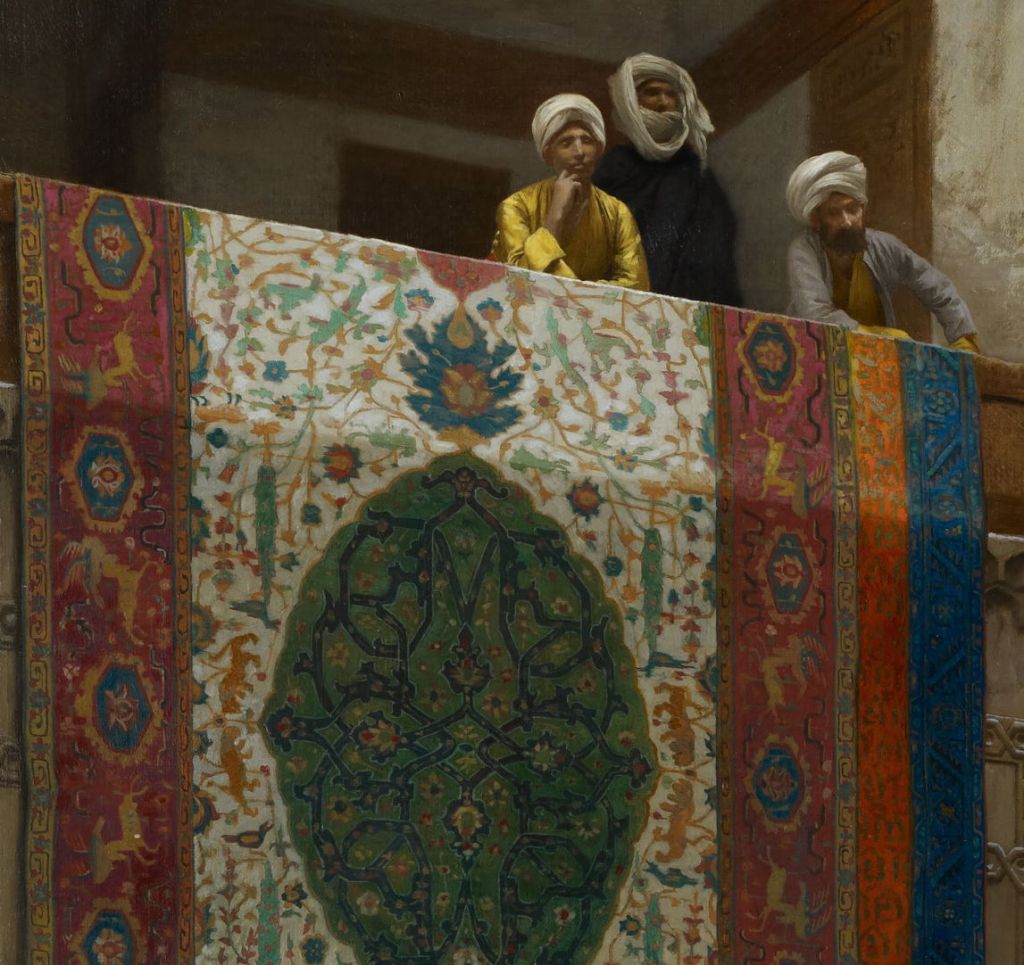 In the first of these two articles looking at carpets and other floor coverings in European paintings, I covered the period to 1881, during which the vast majority of floors remained bare stone or wood. Carpets were thus something of a novelty, and luxury goods.

This is borne out by William Merritt Chase’s paintings of his studio, which he seems to have made into something of a shop window for prospective customers. In his Studio Interior from about 1882, a fashionably dressed young woman is glancing through a huge bound collation of Chase’s work, sat by a grand carved wooden sideboard, decorated with almost outlandish objects including a model ship, a lute, and sundry objets d’art. Under her feet is a wonderful blue carpet, ready to transport her into the scenes shown in Chase’s book.

Martín Rico’s early morning view of a Courtyard of the Doge’s Palace (1883) in Venice, catches one of the household staff beating a carpet, which adds a splash of colour to the scene.

The vogue for ‘orientalism’ wasn’t slow to notice that one of many exotic products traded in the Middle East was fine carpets.

Jean-Léon Gérôme’s Carpet Merchant (of Cairo) from 1887 shows a trading scene in almost photographic detail. Standing on and among crumpled up carpets in this corner of a souk is a group of traders and their customers, admiring one particularly fine example hanging from a balcony as they haggle over price. As an image within an image, Gérôme paints the carpet with its calligraphic design in painstaking detail (below).

The great Turkish artist Osman Hamdi Bey, one of Gérôme’s former pupils, shows a more everyday scene on a street in his home city of Istanbul. The more modest carpet is tempting a European family accompanied by their local ‘guide’.

You could easily mistake Georges Rochegrosse’s undated Palace Entertainment for another by his contemporary Gérôme, although by this time (the period 1894-1914) Rochegrosse was often far more painterly in his style. It shows a dancer with musical group entertaining some Algerian men, her dance involving a pair of short swords. Under the dancer’s feet is a large and brilliant red carpet.

When I first saw Laura Theresa Alma-Tadema’s undated Battledore and Shuttlecock I was fascinated by its floor. Not so much the animal skin which seems ostentatious even for the rich, but its unique tiles which are decorated with a pattern based on the artist’s family monograms. This shows the predecessor to modern badminton, which was often played by young women in full dresses, indoors, as seen here.

While we’re looking at the lifestyles of the rich around the turn of the nineteenth and twentieth centuries, this is Charles Edward Perugini’s group portrait on The Ramparts, Walmer Castle, showing the Countess Granville and her attending relatives the Ladies Victoria and Mary Leveson-Gower. To protect their feet from touching bare stone is a substantial carpet. Yes, outdoors.

Mere carpet isn’t sufficient for the lone woman in John William Godward’s 1904 painting of Dolce Far Niente, or A Pompeian Fishpond. She rests with her knees drawn up into a sleeping (near-foetal) position on an animal skin, with a peacock-feather fan in the foreground.

The last example of Osman Hamdi Bey’s paintings for today is Reciting the Quran from 1910. I love its calligraphic artworks, and at the foot is a wonderful deep blue carpet, perhaps showing signs of wear.

Pierre Bonnard’s bathroom paintings of Marthe are a rewarding source of distinctive floor coverings, which sometimes threaten to overwhelm the whole image.

In Nude in Bathroom (Cabinet de Toilette) from 1932, the diamond pattern is left unprojected in space, as was common among the Nabis, and contrasts with the bright brown of Marthe’s dog.

In his Nude in Bathtub from about 1938-41, the blue and gold pattern rises up like the swell in a harbour, and shouts back at the dazzling walls.

My final painting is the most unusual of them all: a carpet of small waves, painted by Paul Nash in his surrealist Harbour and Room from 1932-36.

When Nash had visited Toulon on the French Mediterranean coast in 1931 (or perhaps the year before), his hotel room overlooked the busy harbour there. One day he saw the image of a large sailing ship in a big mirror, which gave the appearance of the ship sailing into his room. This later painting was made from that visual memory, as a geometric composition which merges Nash’s hotel room, complete with its mirror over the mantlepiece, with parts of a ship, and his splendid carpet of small waves.

I hope that you’ve enjoyed this thorough carpeting – a phrase which refers to being reprimanded, when someone was summoned to stand on the carpet of their senior as they were thoroughly told off.