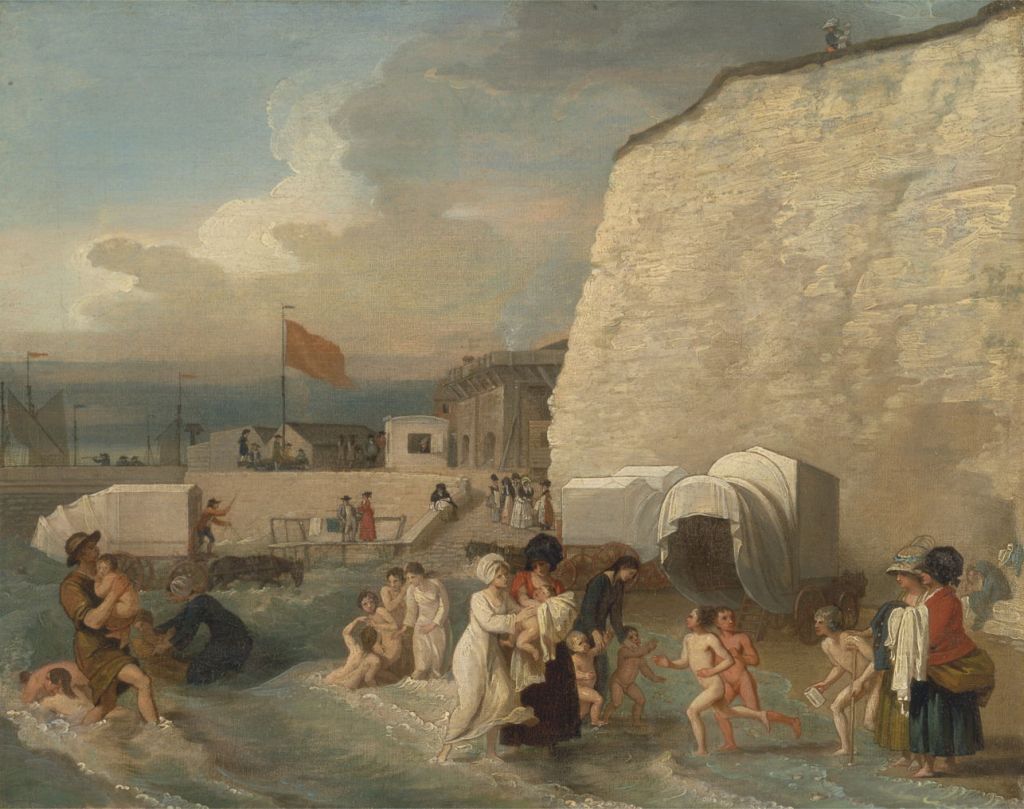 Following his success with The Death of General Wolfe in 1770, the American painter of modern history Benjamin West (1738–1820) enjoyed mixed fortunes over the next decade. His appointment as painter to King George III brought him a reliable income, for which he made a succession of more than a dozen history paintings. His portraiture business flourished too. But his attempt to improve on his modern history paintings, with The Death of Chatham in 1778, had been upstaged by his former protegé John Singleton Copley.

The themes of his history paintings for the king were hardly modern either. These remain in the UK Royal Collection, and include:

West tried The Last Supper in 1784, which appears to be one of his disappointing paintings, certainly in comparison with those of many of the great Masters who had preceded him. In avoiding a more formal composition, West loses the cohesion of the motif, and in so doing fails to convey its profound importance to the Christian faith.

The closest West came to ‘modern history’ during the 1780s is this huge canvas showing Alexander III of Scotland Rescued from the Fury of a Stag by the Intrepidity of Colin Fitzgerald, but more popularly known as The Death of the Stag (1786). This shows a story from the life of this King of the Scots, who lived from 1249-1286.

In one of his most dynamic compositions, West draws the viewer’s gaze not to the figure of the prostrate king, whose life is in imminent danger, but to that of the hero of the day, Colin Fitzgerald, with his spear raised ready to kill the stag. It’s not a straightforward motif, which might have stretched the supreme compositional abilities of Rubens. However, had West studied the solutions used by previous painters in the likes of the Calydonian Boar Hunt, he might have achieved greater success.

There is another snag, this time with his choice of subject: Alexander III was hardly well-known, and those who went off to read up about him were likely to discover that he used great cunning to gain the Isle of Man and the Western Isles from the Norse (‘Vikings’), in the Treaty of Perth of 1266. He was hardly an undiscovered hero of British history, and there were undoubtedly some who would have thought that Colin Fitzgerald could have spared his bravery on this occasion.

In 1786, or thereabouts, West was commissioned to paint an altarpiece for the new chapel of the Royal Hospital for Seamen at Greenwich, which had been destroyed by fire and was rebuilt between 1779-89. His St Paul Shaking off the Viper is the sketch which he made in 1786 and exhibited the following year at the Royal Academy. It shows Saint Paul performing his first miracle, in which he survives being bitten by a snake when he is on the island of Malta.

Saint Paul is shown at the apex of a crowd, the offending snake attached to his right hand. According to the account in the Acts of the Apostles, Chapter 28, it was cold and raining at the time, and the Maltese showed their hospitality by lighting a fire for Paul. As he gathered firewood, and laid it on the fire, a viper attached itself to his hand. Paul shook the snake off into the fire, and suffered no ill-effects from the bite.

Although I can’t find an accessible image of the finished painting, this sketch indicates that it is one of West’s successes. It’s an unusual motif, tackled with a composition which works well, and with wonderful use of the firelight to create dramatic effect.

West’s triptych of The Conversion of St. Paul was painted at about the same time, in 1786. This is one of the great challenges in Christian religious painting, in the central scene showing the conversion on the road to Damascus – a subject which I examine here.

There are conflicting requirements from the biblical account – of a blinding heavenly light, the road to Damascus, and Saul/Paul’s face and its expression – which are almost impossible to resolve in a conventional composition. Even Michelangelo and Caravaggio struggled to keep the narrative in their versions. West’s solution works quite well, although Saul/Paul is forced into a strained position in order for him to look up at the heavenly light and to reveal his expression.

West’s 1878 sketch for the Royal commission of The Installation of the Order of the Garter is more formal, and allowed him little latitude in composition. This shows the scene in Saint George’s Chapel, in Windsor Castle, at the time of the founding of the Order in 1348.

The three members at the centre of the royal family each kneel in their positions around the altar: Queen Philippa of Hainault, wearing a red gown, is at the left, King Edward III, wearing a large crown, is at the far side of the altar, and the Prince of Wales is opposite him at the near side. I don’t know who the king appearing on the balcony is, though.

In about 1788, West received one of his most unusual commissions, from William Russell Birch (1755-1834) who intended publishing a collection of engravings of British landscapes. Although he had painted a few landscapes, including at least one of Windsor Great Park for the king, this took West well out of genre in The Bathing Place at Ramsgate (c 1788).

This shows the novel experience of bathing in the sea from one of the covered horse-drawn ‘bathing machines’, at the nascent resort on the Kent coast at Ramsgate. This had been growing in popularity following its adoption by members of the royal family and nobility, despite the typical English weather seen here. At the time, a large new harbour was under construction, and following its pivotal role in the Napoleonic Wars, Ramsgate was to flourish with fashionable society.

Birch’s collection was published in 1790 under the title Délices de la Grande Bretagne. I’m not sure whether that is a touch of irony, or reveals its intended market. Several paintings used for the engravings were by Sir Joshua Reynolds, and others were by notable painters including Gainsborough.

The Expulsion of Adam and Eve from Paradise (1791) is one of the huge paintings which West made for the Royal Chapel at Windsor, in a grand project for the king which was never completed. This shows the very popular motif drawn from the book of Genesis, which isn’t actually described there explicitly.

Adam and Eve, dressed in fur clothing to cover their shame, are shown being cast out by the Archangel Michael, above whom is a flaming sword of light. The serpent slithers away on its belly, a cursed creature, to eat the dust. West also includes two unusual additions to the traditional: a lion is attacking a pair of horses, and above them an eagle attacks another large bird, perhaps a swan. These exemplify the loss of harmony resulting from the ‘original sin’.

West’s close-knit group of figures is enhanced by dramatic lighting effects to make this a powerful and effective depiction of this familiar motif.