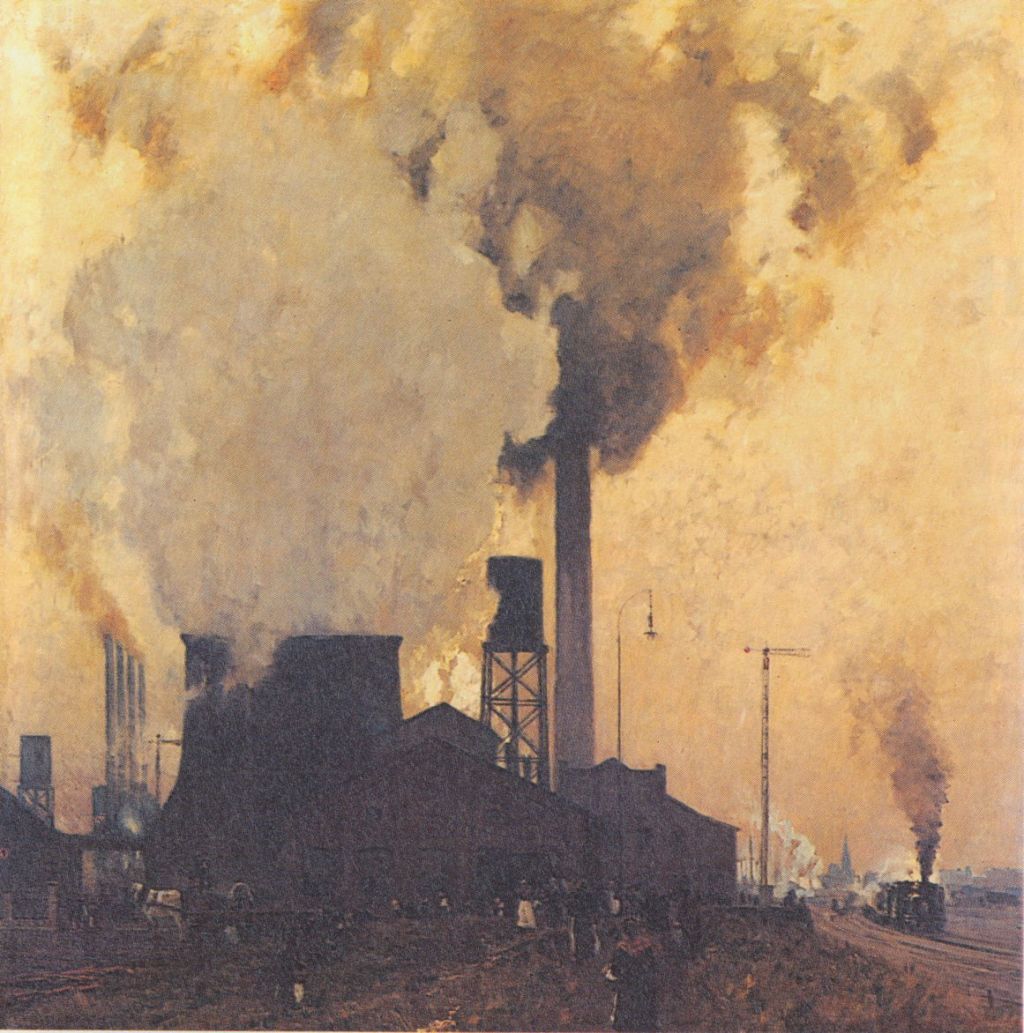 In 1889, the German landscape artist Eugen Bracht (1842–1921) had painted a celebrated Symbolist masterpiece in his Shore of Oblivion, which the Kaiser himself rated so highly that he had his copy hung next to Arnold Böcklin’s The Island of the Dead.

Although I’ve not been able to discover any subsequent overtly Symbolist landscapes painted by Bracht, this nocturne of the Morning Star from about 1900 is more ethereal than his daylight views.

In 1901, Bracht moved to a teaching post in the Dresden Academy of Fine Arts.

He apparently painted The Old Pine during a visit to Norway in 1903. It may just be coincidence, but Hans Gude, Bracht’s former teacher, died in Berlin that year, which might have prompted his former pupil to travel there, perhaps for Gude’s funeral in Oslo.

By 1905, Bracht was well into his sixties, and still teaching in Dresden, when he took on a new sub-genre: the industrial landscape.

The largest employer in the German city of Dortmund was its steelworks, which had been founded in 1871. In 1905, Bracht painted this Impressionist view of the Hoesch Steelworks from the North, with its tall chimneys and their plumes of acrid smoke.

The following year, he travelled to the border between Switzerland and Italy, in the Pennine Alps, where he painted this superb View of the Monte Rosa, West Side (1906). The Monte Rosa massif is a complex of peaks rising to a maximum of 4,634 metres (15,203 feet), which is the second highest in western Europe (excluding the Caucasus) after Mont Blanc.

Another year later, Bracht was back in Dortmund painting the Hoesch Iron and Steel Plant, Dortmund (1907), the complete antithesis to the Monte Rosa.

Bracht’s longstanding fascination with clouds and ‘skying’ continued with Evening Clouds from 1911, which remains gently Impressionist.

Loisachbett (Loisach Bed) from 1916 shows a section of the River Loisach, probably near Garmisch-Partenkirchen in the Austrian Tyrol, or perhaps in Bavaria. This appears to be an oil sketch made in front of the motif.

In the same summer season, Bracht visited the Wetterstein Alps on the southern border between Germany and Austria, where he painted this fine view of the Zugspitze (1916). At just under three thousand metres (nearly ten thousand feet) elevation, this is the highest mountain in Germany. This also appears to have been painted en plein air.

At the end of the Great War in 1918, Bracht visited Swabia, the region to the west of Munich, in south-western Germany. He there painted this Impressionist view of a Swabian Village.

Slope with Beeches (1918) appears to have been painted as the autumn colours were just starting to develop.

Bracht retired from teaching in 1919, and lived his remaining years in Darmstadt.

After he had made the last copy of his famous The Shore of Oblivion in 1916, Bracht continued to paint. Stormy Day from 1920 is another fine example of his Impressionist skying, with a large bird, possibly a heron, in flight over the inky grey clouds near the horizon.

Bracht died in Darmstadt in late 1921.