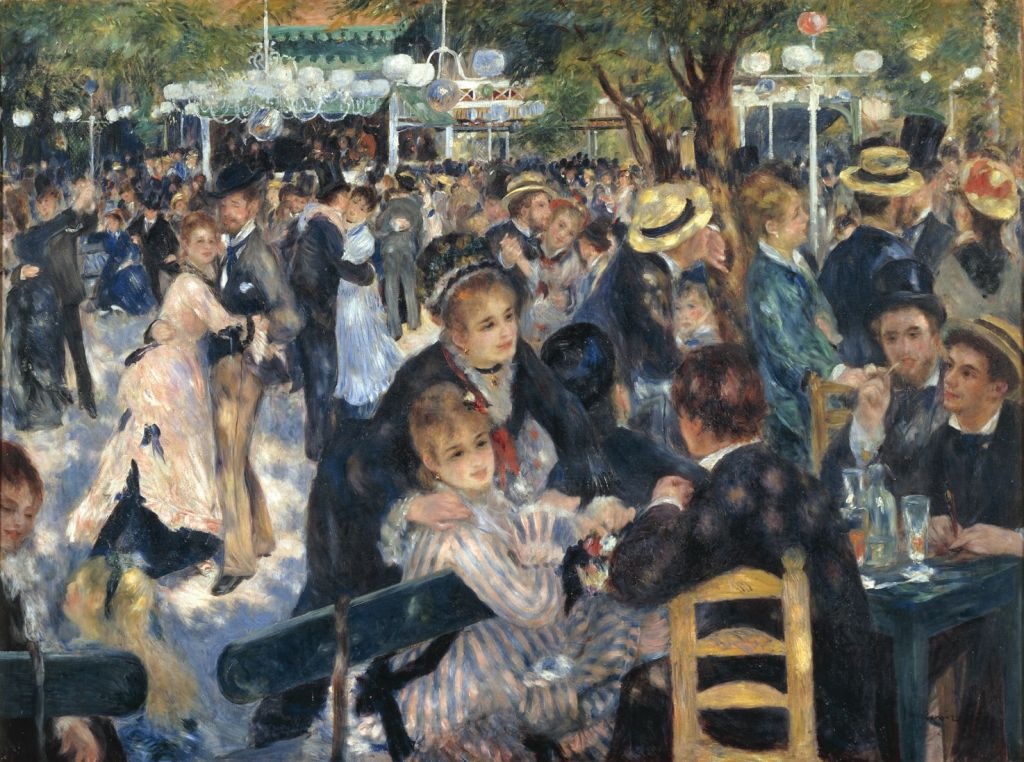 If you’ve ever been to Paris, I’m sure that you’ll have visited its eighteenth arondissement, Montmartre: the hill that rises out of densely-packed streets, capped by the huge domed edifice of the Basilica of the Sacré-Cœur, green trees embracing its foundations. In this article, and its conclusion tomorrow, I look at some of the best paintings made of this district now known for its strong artistic connections, as well as its nightlife.

Montmartre takes its name from the Mount of Mars, implying that Romans may have had a temple here during imperial times, although so far no archeological evidence has been found to support that. If you believe the Abbot of the Monastery of Saint-Denis who wrote an account of that saint before about 885, the Mount of Mars was later supplanted by the Mount of Martyrs.

Léon Bonnat’s ornate showpiece in the Panthéon of The Martyrdom of Saint Denis (1874-88) tells the Abbot’s story quite explicitly.

According to this legend, Saint Denis, patron saint of the city of Paris, was martyred by beheading on Montmartre hill. It’s claimed that after his head had been cut off, Denis picked it up and walked around preaching a sermon. The legendary location became a place of veneration, then the Saint Denis Basilica, and the burial place for the kings of France.

By the fifteenth century, the slopes of Montmartre had grown into a village, tucked among vineyards and orchards. In 1529, windmills were built on the windward (western) slope to grind locally-harvested grain. By 1790, with the city of Paris growing steadily, Montmartre was just outside the outer boundary of the metropolis, and stone quarries and gypsum mines were slowly eating their way into its hillside.

Georges Michel’s view of The Mill of Montmartre, which was probably painted in about 1820, shows how rural the area remained just a few years after the Russians had bombarded the city below using their artillery from the hilltop. By this time, there were only a few windmills left.

When the pre-Impressionist Johan Jongkind came to paint this View of Montmartre in about 1850, it still had tumbledown cottages, rustic horses and carts on mud tracks, and three remaining windmills on the skyline.

Jongkind also painted this sketchy watercolour Self-portrait in August 1850, adding annotations ten years later to the effect that he is standing in Montmartre. This possibly qualifies as the first such self-portrait to have been painted in Montmartre. It was also the last to be made before the area became assimilated into the city of Paris, which occurred on 1 January 1860.

Just as Jongkind’s art was followed by the French Impressionists, so they followed his lead to live and paint in Montmartre. By this time, the area had become famous for its cafés and cabarets, and still had a slightly rural air to it.

Alfred Sisley spent as little time in Paris as he had to, but shortly before the Franco-Prussian War, he moved with his family to live in the Cité des Fleurs, from where he painted this View of Montmartre from the Cité des Fleurs in 1869.

The following year, Montmartre was the site of a major event in the history of balloons as a mode of travel. By 7 October 1870, Prussian forces had encircled the city. The French government had fled to Tours, leaving Léon Gambetta, the Minister of the Interior, trapped in the city. As shown in Jules Didier and Jacques Guiaud’s painting of the Departure of Gambetta in the Balloon ‘Armand-Barbès’ on 7 October 1870 (c 1870), he made his escape by balloon from the foot of Montmartre hill.

In 1874-76, Ilya Repin visited Paris, painted there, and exhibited paintings at the Salon. This was an important period during his early career, when he was able to experience the art of the French Impressionists at the height of the movement. Among his paintings from that period is The Road from Montmartre in Paris (1875-6), which makes interesting comparison with Jongkind’s above. How little seems to have changed.

But Montmartre was about to change beyond all recognition: as a gesture of expiation for the suffering imposed on the city of Paris during the Commune in 1871, the Basilica of the Sacré-Cœur (but not of Saint-Denis) was built on the top of the hill between 1876-1919. It is now one of the major landmarks of the city.

During the late Spring of 1876, Auguste Renoir made various studies and sketches near his new rented house and studio in Montmartre. He then worked them up during May into one of his – and Impressionism’s – masterpieces, Bal du moulin de la Galette (Dance at the Moulin de la Galette) (1876). This was exhibited at the Third Impressionist Exhibition, and has become one of the canonical European paintings of the late nineteenth century.

Paintings of Montmartre have proved decisive works for other artists. Jean Béraud had his first painting accepted for the Salon in 1872, but it wasn’t until 1876 and his Leaving Montmartre Cemetery that he attained recognition. It has the same greys and blacks as Caillebotte’s Paris Street, Rainy Day painted the following year, but lacks the latter’s photographic view.

Renoir painted oil sketches of people and scenes inside the cafés of Montmartre. In the Café from about 1877 is typical of these, but surprisingly it was accepted for the Salon of 1878, his first work to be exhibited there for eight years.

Auguste-Louis-Marie Jenks Ottin (1811-90) was the oldest of the artists who exhibited at the First Impressionist Exhibition in 1874, and was the treasurer of the Impressionist group at that time. Although primarily a sculptor, he later painted this view of Montmartre, Paris (1882). Two windmills are still visible, and to their left a small dome, which I don’t think is part of the new Basilica under construction.

In tomorrow’s article, among other more recent paintings of Montmartre, I will feature some by its most famous visitor of the time, Vincent van Gogh.