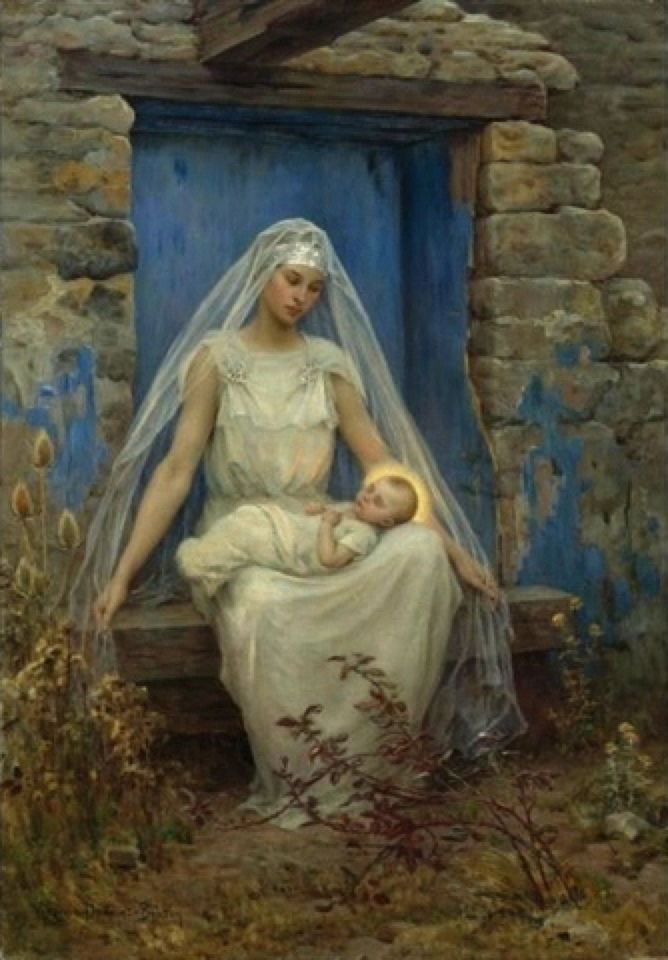 It wouldn’t be Christmas without a Nativity, or my selection of eleven for this year. Probably the most popular motif in European painting, you could look at eleven every day of the year and still not see them all.

By Nativity, I mean a scene at which the centre is the newborn Jesus Christ, surrounded by the Holy Family. Among those adoring the infant can be various shepherds, but not the three Magi (normally considered to be a different motif), and most usually the event takes place in a simple stable, with certain traditional animals such as an ox and an ass.

Although this appears in various icons, miniatures and other paintings of the Middle Ages, it wasn’t until the transition from Byzantine art to the pre-Renaissance that it first became established in its modern form.

Duccio’s Nativity with the Prophets Isaiah and Ezekiel (1308-11) forms a prototype for centuries of subsequent paintings, with its humble shed set into rock, the Holy Family, and the attendant animals (ox, ass, sheep) and humans (shepherds, angels). This was installed at the high altar in the Duomo (cathedral) in Siena on 30 June 1311, and remained there for nearly two centuries, only being removed in 1506, a tribute to its innovation.

Just over a century later, Robert Campin’s Nativity from about 1415-30 follows the trend popular in the northern Renaissance of depicting the stable as a dilapidated thatched structure of the type seen widely across the countryside of northern Europe. This was an important step in transforming depictions from the iconic to the representational.

In the middle of the fifteenth century, Petrus Christus elaborated his careful perspective projection into a gentle trompe l’oeil, in which its facade acts as a three-dimensional frame. The contrast in size between the tiny angels and the parents of Christ is strikingly archaic, though.

By the end of the fifteenth century, the short-lived early Netherlandish painter Geertgen tot Sint Jans transformed the scene with his innovative use of chiaroscuro in his Nativity at Night, thought to be from about 1490. Chiaroscuro makes narrative sense here, and results in a scene of great tenderness and reverence, thanks to its soft transitions of tones.

Although there are many fine Nativities from the following four centuries, they tended to evolution rather than revolution until the late nineteenth century, when artists started to experiment in giving more contemporary accounts.

Fritz von Uhde’s triptych of The Sacred Night painted in 1888-89 shows three scenes from a contemporary recasting of the story of the Nativity. In the centre is a very modern interpretation of the classic Virgin Mary and Child, with the adoration of the Magi on the left, and a delightful angelic choir singing amidst the rafters of the barn on the right.

Von Uhde’s undated Christmas Night, shows another modern interpretation of the Holy Family of Joseph, the infant Christ, and the Virgin Mary in their improvised accommodation in Bethlehem. Joseph is preparing Mary a frugal meal on a small spirit stove which is placed on an upturned wheelbarrow.

My favourite Nativity from this period of reinterpretation is Virginie Demont-Breton’s almost forgotten Alma Mater. Although her style may appear quite conventional, her departures from convention have resulted in a painting which is fresh and has lasting relevance. The Virgin Mary, our ‘nourishing mother’ of the title, is dressed in white as a bride. The traditional blue has transferred from her clothing to the flaked paint of the ruins behind her.

She looks very young, and there is no sign of Joseph, just her obviously holy infant lying swaddled on her lap. Around her are the weeds of waste and derelict sites. Is she yet another homeless single mother? This might make a poster appropriate for many Western nations today.

Eleanor Fortescue-Brickdale’s undated watercolour of The Nativity shows a distinctly contemporary cowshed, whose links with the Biblical account are mainly in the dress of the mother attending to her infant.

The Nabi artist Maurice Denis was another who transcribed events described in the Bible into modern settings. One of the most impressive of these is his thoroughly modern Nativity from 1894, in which the birth of Jesus takes place in a French town. Living above the ‘stable’ are a dodgy-looking couple who are leaning out of their window. Joseph himself looks very French, but behind him are traditional ox and ass, and a small flock of sheep are watching from outside.

Albin Egger-Lienz’s Christmas Eve from 1903 appears to be a re-interpretation of the traditional adoration of the shepherds, apparently set in a Tyrolean cowshed, with skilful use of light. I wonder whether its title has been mistranslated, and should instead refer to Christmas night.

My final novel Nativity is the most radical of all: Joseph Stella’s Crèche from 1929-33. At its centre is the Nativity ‘crib’ so typical of modern Christmas in the West, with an audience who appear to have been drawn from Stella’s home city in Italy, playing traditional bagpipes in homage. In front of the table on which the crib stands are a ewe and her lamb bridging between two major threads of Mary and infant Jesus in the crib, and Christ as the lamb of God.

I wish you a very Happy Christmas!