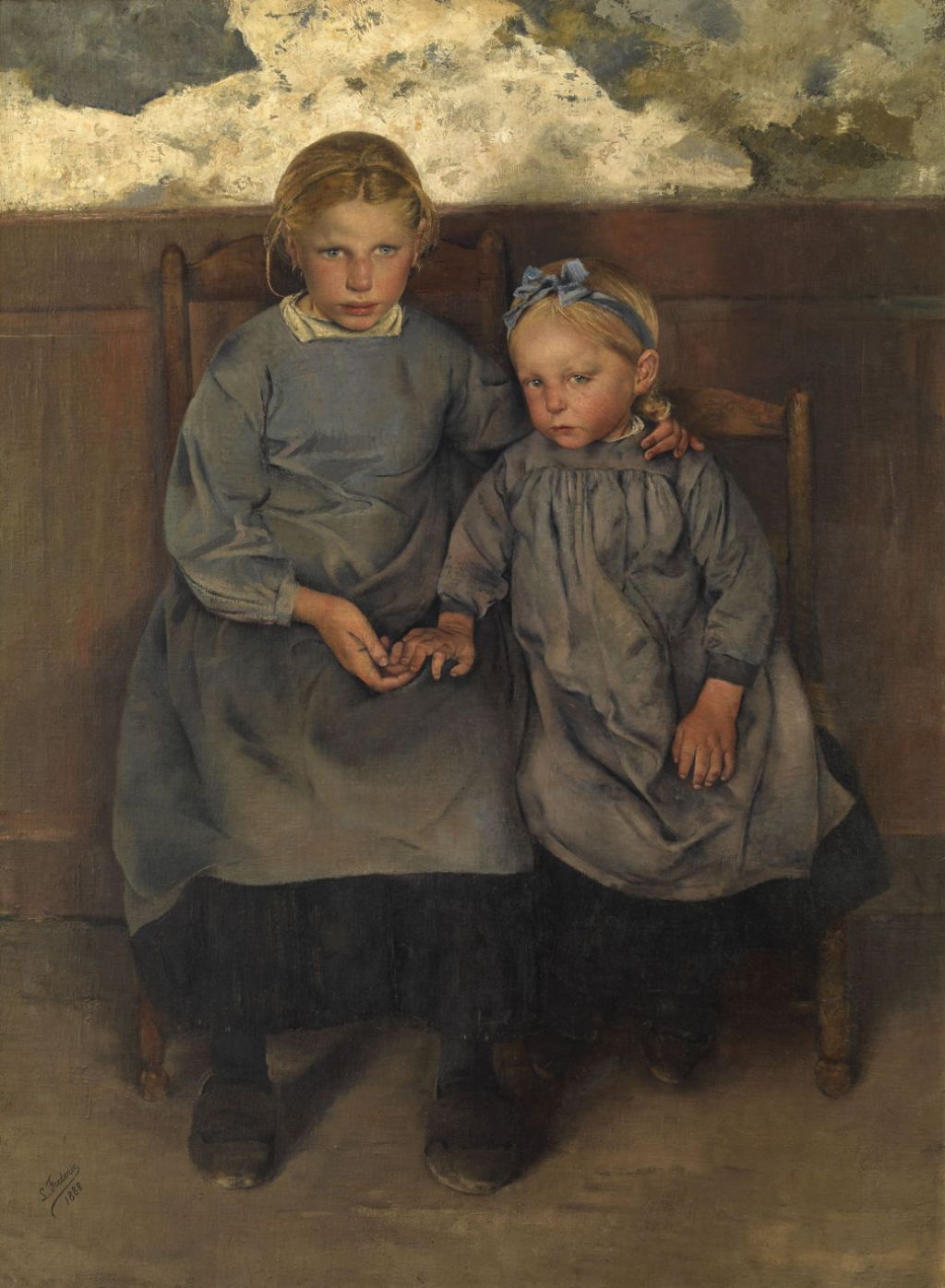 My quest for symbolist artists has been turning up some strange results recently. One of these is the brilliant and once well-known Belgian painter Léon-Henri-Marie Frédéric (1856–1940). In this article and the next, I’ll tell you as much as I’ve been able to discover about him, and introduce you to a selection of his most unusual paintings.

He was born in Brussels, the son of a successful jeweller. You will find the year of his birth given in many places as 1865 rather than 1856: as far as I can ascertain this is a simple typo which has unfortunately been copied many times. As he started his artistic training in 1871, the idea that he might have been born as late as 1865 is ever so slightly incredible. But you’ll find this error repeated widely.

He was first apprenticed to an architect and decorative painter in 1871, when he also started studies at the Académie Royale des Beaux-Arts in Brussels. From 1874, he seems to have become a full-time student, working as an assistant in the professorial studio.

He must have seen his future in history painting, as he entered the contest for the Prix de Rome three times before completing his training in 1878, but was unsuccessful. Had he won the Prix de Rome, he would have been sponsored to attend the French Academy in Rome. His father agreed to fund a year in Italy instead, and when there he discovered the masterpieces of Botticelli and Ghirlandaio, which were to remain an influence over his subsequent work.

He returned from Italy in 1879, as Jules Bastien-Lepage and other Naturalists were all the rage at the Salons, including those held in Brussels. Over the following years, Frédéric seems to have followed this trend and concentrated on painting the rural poor.

Among his early works which survive is this triptych showing The Legend of Saint Francis (1882) in quite conventional and Naturalist terms. It may be that, whilst Frédéric was in Italy, he saw the cycle of twenty-eight frescoes in Assisi, which at the time were attributed to Giotto (which has subsequently been disputed). The three panels show episodes from the legend, ending at the right with the story of the wolf of Gubbio/Agubbio, which had been painted so brilliantly by the French Naturalist Luc-Oliver Merson.

That very conventional narrative painting was accompanied by his extraordinary Studio Interior (1882), which appears to be a fantasy self-portrait in which the artist is naked with a skeleton on his lap. The latter has been dressed up in undergarments with a long starry veil over them. His palette and brushes are at the lower right, and his clothes – including a top hat – are draped on chairs.

The following year, Frédéric moved to the Belgian Ardennes, from where he travelled repeatedly to Britain, Germany and the Netherlands, establishing his reputation.

This trio of paintings shows local rural Chalk Sellers (1882-83) in the morning (left), at their noon meal break, and in the evening (right). They appear to have started the day in their village, walked to the town with its factories and schools, then walked back to their homes.

Frédéric may have painted this undated Burial of a Farmer at this time, possibly to accompany the work below. Country funerals had come into a certain vogue after Gustave Courbet’s enormous success at the Salon of 1850 with his equally huge Burial at Ornans (1849-50). This is very different, showing a procession of mourners at a village funeral in the Ardennes in the winter. Leading the ranks at the left are the farmer’s widow, mother and small son, and following are other close relatives and most of the rest of the local people. The combination of mourning dress and snow make this appear almost monochrome, relieved only by three children at the right and the occasional glimpse of other garments.

This may have been followed or accompanied by Funeral Meal from 1886, in which a large group of mourners have sat down outside in the summer sunshine to remember the deceased following the funeral. Frédéric’s composition, looking down the length of the table at the level of the heads of those seated around it, brings a marvellous succession of heads and hands to the right of the painting.

In the years following the unexpected and premature death of Bastien-Lepage, Frédéric painted one of the most haunting images of rural deprivation in these Two Walloon Farm Children, from 1888. I don’t know whether this was one of his paintings exhibited at the Exposition Universelle in Paris the following year, but he was there awarded a gold medal which sealed his success as an artist.

In 1894, Frédéric painted the four seasons, from which this represents Fall (autumn). Each is represented by a young winged child cavorting in the seasonal flora, in a rich and colourful fantasy.

Although the girls shown in Frédéric’s Three Sisters from 1896 are clean and well dressed, they are sat together peeling their staple diet of potatoes in a plain and barren farmhouse. A glimpse of the shoes of the girl at the left confirms that they are neither destitute nor affluent.

From around 1890, like some other Naturalists, Frédéric changed tack and started to paint grand fantasies with pantheistic and mystical themes, which dominated the rest of his career. I’ll look at some of those tomorrow.