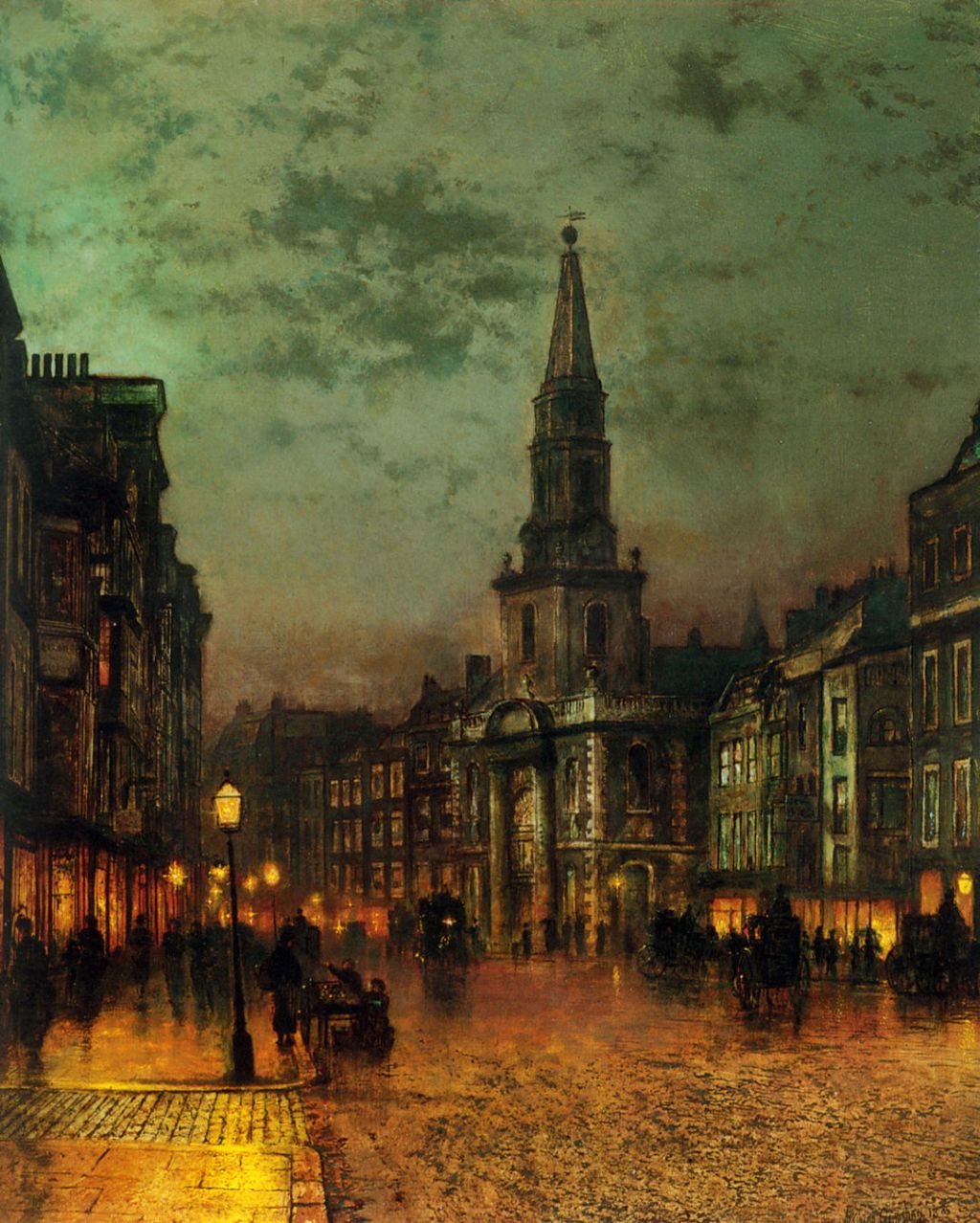 In my first article about the British Victorian artist John Atkinson Grimshaw (1836–1893) I showed the evolution of his nocturnes and low light paintings to 1879. This second article shows some of his later works, in which he travels further afield.

Autumn Gold (1880) is set outside what appears to be a country manor house somewhere in England. Leaf fall is well under way, and at the top of stone steps is a maid from the house. There are no other signs of life.

During the 1880s, Grimshaw maintained a studio in London, near Whistler’s, and the two probably met, but didn’t become closer friends. Opinion is divided among his biographers as to whether Grimshaw suffered a financial crisis and returned to live in Leeds, or continued to grow his success in London.

Whether or not he kept a studio there, Grimshaw painted some famous views, including Reflections on the Thames, Westminster from 1880. This looks upriver towards the distinctive clock tower and buildings of the Palace of Westminster, Big Ben and the Houses of Parliament. Unusually among his paintings, he has significant staffage, with a couple of glimpses of stories, such as the ‘Bobby’ or policeman talking to a young woman in the middle distance, as she walks along the Embankment. She appears to be homeless, dressed in tattered clothing, and carrying a basket.

Grimshaw travelled to Scotland, where he painted Shipping on the Clyde in 1881, showing the waterfront in the city of Glasgow, in wet weather. Alongside is a forest of masts of trading ships, and a poor couple warming themselves by a brazier.

Evening Glow from about 1884 revisits the theme of the lone pedestrian walking by a large house, here set in autumn with the road covered with golden-brown leaves, and stretching into the murk in the distance.

I don’t know the identity of Grimshaw’s sitter for Mistress Dorothy in 1885, but this doesn’t appear to show his wife. The lady sits, her feet elevated off the cold floor by a foot warmer. She is embroidering whilst wearing an unusual pair of wristlets.

The street and its occupants are bathed in a warm mixture of gaslight and oil lamps in Grimshaw’s Blackman Street, London from 1885. By this time, the artist must have been aware of the looser and more painterly style which was becoming popular as some of the French Impressionists became better accepted. This street is on the south bank of the River Thames, not far from Borough.

Grimshaw returned to Glasgow in Scotland, where he painted The Broomielaw, Glasgow in about 1889. This street runs along the northern bank of the River Clyde, now forming the southern edge of the city’s financial district. As in his early painting of Whitby, fine lines outline the buildings which might otherwise merge into their surroundings, and lend this a slightly ghostly air. This street’s unusual name is derived from the Brumelaw Croft, whose fields these were in the long past.

When he first became successful as an artist, Grimshaw rented a holiday home in Scarborough, a major seaside resort in North Yorkshire. He painted scenes from this area from time to time, including this strangely distant view of Sand, Sea and Sky A Summer Fantasy (1892) in which he has gone out of his way to ensure that all its figures are remote.

In 1893, Grimshaw visited the city of Rouen in France, where he painted this view of the Quai de Paris, Rouen. This time he has avoided adding ghostly outlines, allowing its details to soften more naturally as they recede into the mist.

I have one undated figurative painting of his, which I suspect dates from the 1870s, and shows a woman keeping a Night Vigil in the midst of a garden of exotic plants. She has a classical look, and is wearing clothes inspired by classical robes.

Grimshaw died, either of tuberculosis or cancer, in the autumn of 1893. His finely detailed nocturnes contrast markedly with the painting of Eugène Jansson which I showed last week. Their meticulous realism may disqualify them from ever being considered Symbolist, although many are other-worldly.