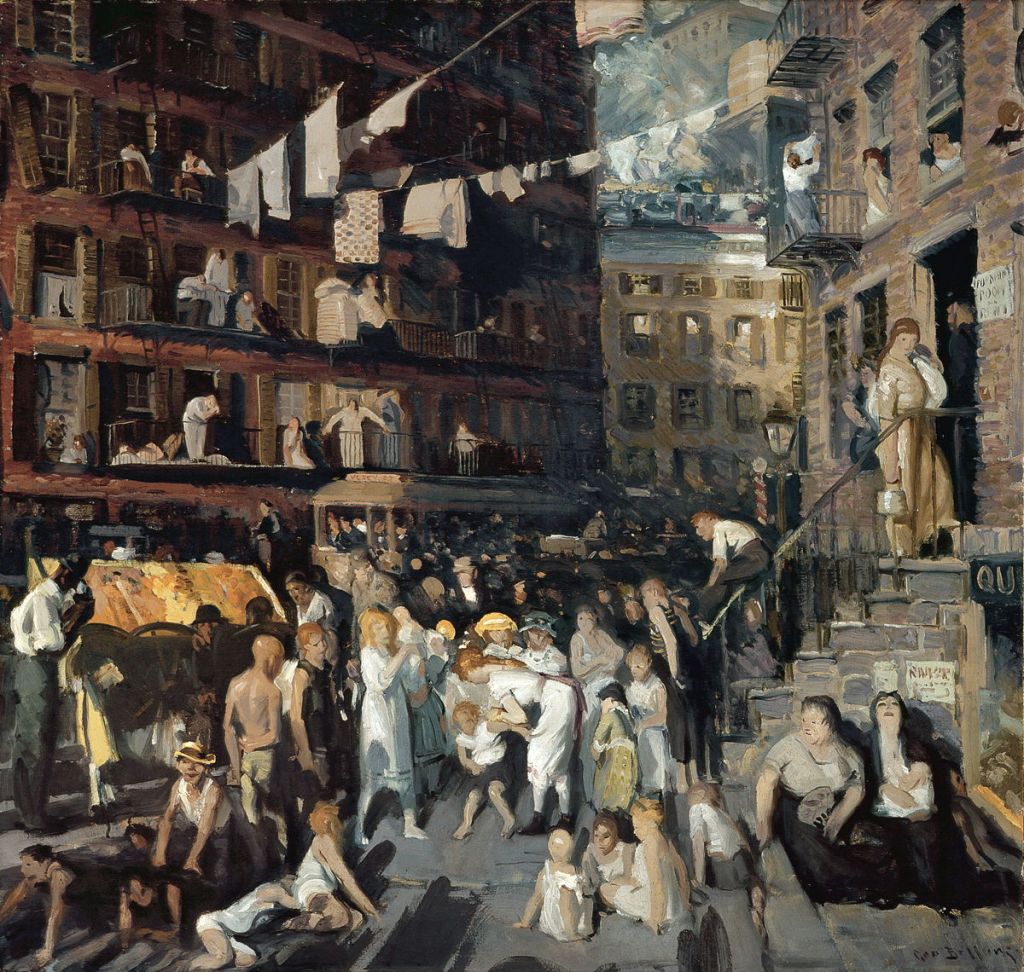 In the first of these two articles looking at paintings of urban crowds, I ended with a brilliantly detailed realist painting of the waterfront market in Constantinople, now Istanbul, completed in 1877.

Meanwhile back in Paris, although the core French Impressionists seemed relatively disinterested in urban bustle, Naturalists such as Alfred Philippe Roll were more ambitious.

This is a sketchy oil study for Roll’s enormous depiction of celebrations on the 14th of July – the Fête Nationale or Bastille Day – in 1880. The finished work is 6.5 metres high, and nearly ten metres across, and was shown in the Salon of 1882.

It wasn’t that which inspired Camille Pissarro, though. He’d long had an artistic interest in markets and similar gatherings in towns. Then from May to August 1892 he was in London, where he stayed in a rented apartment in Kew, in the south-western suburbs, where he painted a total of eleven canvases.

Pissarro’s visit coincided with the summer public holiday in early August. On that day, he painted Bank Holiday, Kew (1892) from the balcony of that apartment, the precursor of his later densely-populated urban landscapes.

Léon Augustin Lhermitte was another Naturalist with an eye for fine detail, who had painted almost exclusively in the countryside. Late in his career, in 1895, he moved his easel into central Paris to paint one of the most vivid images of the city at the time, in Les Halles. This shows the central market in Paris, described so well by Émile Zola in his novel Le Ventre de Paris (1873).

When Pissarro suffered eye disease, including abscesses on one eye, his doctors instructed him to paint indoors behind windows to shield his eyes from dust. It was this which drove the artist to start painting his late urban series.

Pissarro’s Boulevard Montmartre, Spring from 1897 shows a landscape composed primarily of buildings and streets, a plethora of figures, and countless carriages to move those people around.

As Pissarro was painting these innovative cityscapes, on the other side of the Atlantic the American painter Colin Campbell Cooper was making similar views of the crowds in New York City as they poured into their places of work in the midst of skyscrapers.

In Cooper’s The Rush Hour, New York City from about 1900, the canvas is literally teeming with people, who are pouring along the street, packing the stairways and walkways to a station, and seething around booths and tramcars.

Cooper’s cityscapes came to focus primarily on the enormity of the buildings, as seen in this painting of the Flatiron Building, Manhattan from about 1908.

Others among the new generation of Post-Impressionist painters increasingly depicted the crowds in their cities.

Pierre Bonnard’s Place Clichy (The Green Tram) from about 1906 shows this very busy intersection at the edge of the Montmartre district of Paris, more properly known as Place de Clichy. The streets are crowded with a tram (which had only recently been electrified), several horse-drawn vehicles, and a market barrow in the foreground. There are also pedestrians almost everywhere, even some small dogs.

The crowded streets of New York City became one of the central themes of the new Ashcan school of art, notably in the paintings of George Bellows.

In Bellows’ New York from 1911, the landscape is densely human. Its horizon, formed of figures walking past a white background, divides the canvas into two. Above is a vague blur of buildings, below a cacophony of vehicles, stalls, and people. As shown in the detail below, Bellows’ much larger figures in the foreground are little more detailed than the tiny figures in Cooper’s work.

In 1913, Bellows painted what must be the most human landscape of them all, in his famous Cliff Dwellers. This reverses Cooper’s hierarchy by overwhelming its buildings with people.

European painters in other cities followed suit. This example is Paul Hoeniger’s Spittelmarkt from 1912, showing the eastern end of Leipziger Straße in central Berlin.

My final painting, by Maximilien Luce, marks the end of the old order, and the real start of the twentieth century, as it shows The Gare de l’Est in Snow in 1917. It is a sequel to Frith’s painting of Paddington station in 1862. Hadn’t the world changed in those fifty-five years?