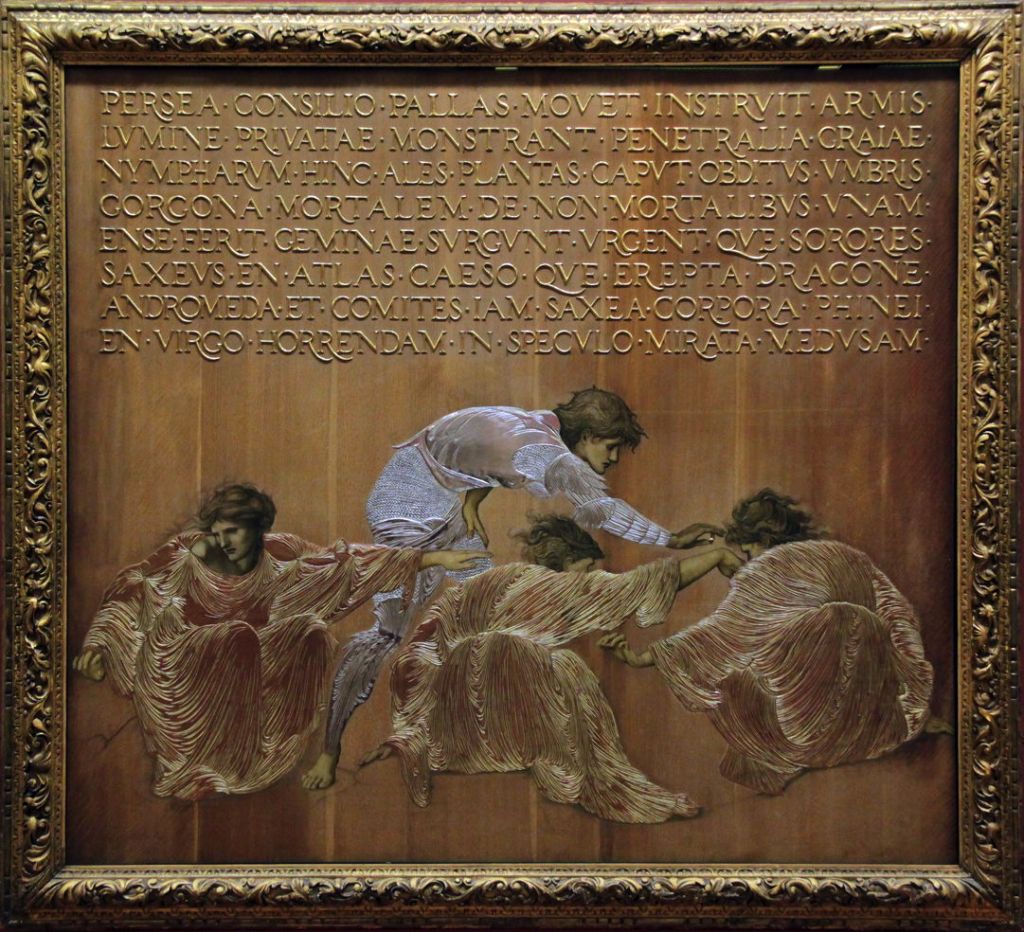 In the first article in this series of three, I looked at paintings in which words are an integral part of their story or reading. Today I come on to a selection of those in which included text extends the references in the painting itself. In most cases, these are quotations which those sufficiently learned would recognise.

In earlier modern paintings, these are almost invariably quotations from the Bible or classical sources.

Robert Campin’s Nativity from about 1415-30 follows the trend popular in the northern Renaissance of depicting the stable as a dilapidated thatched structure of the type seen widely across the countryside of northern Europe. The artist also adorns it with inscriptions to link it to the Biblical text, although these are sufficiently fragmented as to make it very difficult to reconstruct their contents.

The tomb at the foot of Masaccio’s great fresco of The Holy Trinity from 1426-8 is that of Adam, the first man. The inscription above his skeleton reads Io fui gia quel che voi siete e quel ch’io sono voi anco sarete: I once was what now you are and what I am, you shall yet be – a sobering reminder of our mortality.

Pietro Perugino’s fresco portrait of the Roman statesman Cato in the Collegio del Cambio in Perugia, Italy, from 1497-1500, is supported by a Latin inscription which reads:
Quisquis, vel celebri facturus verba corona surgis, vel populo reddere iura paras, privatos pone affectus: cui pectora versant aut amor aut odium, recta tenere nequit.
I haven’t located a good translation of this epithet, but it refers to him restoring rights to the Roman people regardless of his popularity or dislike.

Paintings of the Virgin Mary are commonly annotated with text, although as many were exhibited in churches, few of those gazing at them would have been able to make any sense of the words, so many of those inscriptions are sufficiently brief as to be easily committed to memory.

Fra Bartolomeo’s Madonna della Misericordia from 1515 shows the Virgin Mary in her role as the Madonna of Mercy. The inscription at the top, underneath the body of Christ crucified, is Misereor sup(er) turbam, a quotation from Jesus’ words as given in the gospel of Mark, chapter 8, verse 2, meaning I have compassion on the crowd, which is the theme.

Textual snippets were also common in Vanitas paintings when they becaame popular in northern Europe, during the sixteenth and seventeenth centuries, although once again the words appear to have been more decorative than meaningful.

Jan Sanders van Hemessen’s Vanitas from about 1535-40 features an unusually androgynous angel with butterfly wings, cradling a human skull with fragmentary Latin inscriptions. Within the skull is an inset window, through which there is a tiny landscape view.

Latin quotations enjoyed a revival of popularity in nineteenth century painting, particularly among the Pre-Raphaelite Brotherhood and those around it.

Dante Gabriel Rossetti was a leading Pre-Raphaelite painter, a poet, and translator, whose first painting of Pandora, completed in 1871, was modelled by Jane Morris. She has just cracked open the lid of the jewelled casket held in her left hand, and it emits a stream of noxious red smoke. As this coils around her head winged figures appear in the fumes.

This was one of Rossetti’s earlier paintings of Jane Morris, the wife of his friend William Morris, and the subject of Rossetti’s late passionate obsession. Rossetti’s source for the story of Pandora was most probably Lemprière’s dictionary of classical mythology, which erroneously referred to Pandora’s box, rather than the more traditional jar. The inscription on the side of the jewel casket reads “Nascitur ignescitur”, meaning born of flames.

Occasionally, inscriptions within a painting spill out onto the frame. Louis Welden Hawkins’ Portrait of Séverine from 1895 shows a popular journalist, who was then at the height of her fame. Séverine’s original name was Caroline Rémy (1855-1929), and she was a famous defender of humanitarian causes. Hawkins made this frame himself. On its left are olive branches and the inscription PAX (peace), and on the right are ears of wheat and the inscription PANIS (bread). He also makes his signature the title of a book.

In a few instances, inscriptions in paintings have grown out of control and extend far beyond the pithy quotation.

In Gustave Moreau’s Jason from 1865 the context of the painting is given in the almost illegible inscriptions on the two phylacteries wound around the column at the left.

Cooke has deciphered their Latin as reading:
nempe tenens quod amo gremioque in Iasonis haerens
per freta longa ferar; nihil illum amplexa timebo
(Nay, holding that which I love, and resting in Jason’s arms, I shall travel over the long reaches of the sea; in his safe embrace I will fear nothing)
et auro heros Aesonius potitur spolioque superbus
muneris auctorem secum spolia altera portans
(And the heroic son of Aeson [i.e. Jason] gained the Golden Fleece. Proud of this spoil and bearing with him the giver of his prize, another spoil)

Moreau thus informs us that we should read the painting in terms of the conflict between Jason and Medea: Medea expresses her subjugate trust in him, whilst Jason considers her to be just another spoil won alongside the Golden Fleece. And she was a spoil which Jason was quick to dispose of when it suited him: when he met Glauce (or Creusa), he decided to move on and marry her too.

Edward Burne-Jones originally planned that his series telling the story of Perseus and Andromeda would include a lengthy Latin inscription. In this preparatory version of Perseus and the Graiae from 1875-8, he follows classical conventions in setting the text in block capitals. He uses V for the modern letter U, points separate its words, and there is no punctuation to mark sentences. As Latin is a highly inflected language, its word order has no effect on meaning, and is much more flexible than English, for example. Working out the grammatical and sentence structure of the inscription is therefore not an easy task even when you do know Latin.

Others may have found this purist approach too incomprehensible, and in the final version painted in oils he dropped the inscription altogether, elaborating on the background instead.

In Lovis Corinth’s Homeric Laughter (1909), one of the artist’s most complex, even abstruse, paintings of classical myth, he offers a clue to its reading in the long inscription (originally in German translation):
unquenchable laughter arose among the blessed gods as they saw the craft of wise Hephaestus
together with the reference to Homer’s Odyssey book 8 line 326.

This refers to a section in which Odysseus is being entertained by King Alcinous, after meeting Nausicaä on the island of the Phaeacians. To cheer Odysseus up, the bard Demodocus tells a tale of the illicit love affair between Ares/Mars (god of war) and Aphrodite/Venus (god of love), which has featured extensively in art. One day Hephaistos/Vulcan catches the couple making love in his marriage bed, and throws a very fine but unbreakable net over them. Hephaistos summons the other gods, who come and roar with laughter at the ensnared couple.

Monumental wall paintings are prone to including long textual passages too.

Elihu Vedder’s Minerva of Peace (1897) in the Library of Congress Thomas Jefferson Building in Washington DC is a good example, although it’s a mosaic rather than painting. In addition to the scroll listing the goddess’s spheres of influence, the inscription below is a quotation from Horace’s Ars Poetica. It reads Nil invita Minerva, quae monumentum aere perennius exegit, meaning Not unwilling, Minerva raises a monument more lasting than bronze, and thankfully uses modern text conventions for comprehension.

My final example for today is an extended signature in which Botticelli pours out his fears.

In 1500, Botticelli was feeling his age. His great successes with the elite families were long past, and his workshop largely idle. From that came a painting of the nativity with a most curious combination of the traditional set alongside elements which today look quite bizarre: his Mystic Nativity, now in the National Gallery in London.

At the very top is an inscription in Greek, which means: “This picture, at the end of the year 1500, in the troubles of Italy, I Alessandro, in the half-time after the time, painted, according to the eleventh [chapter] of Saint John, in the second woe of the Apocalypse, during the release of the devil for three-and-a-half years; then he shall be bound in the twelfth [chapter] and we shall see [him buried] as in this picture.” This refers to the chapters from Revelation which the martyred Savonarola had used in his preaching.

Tomorrow, I will concentrate on signatures and dedications.