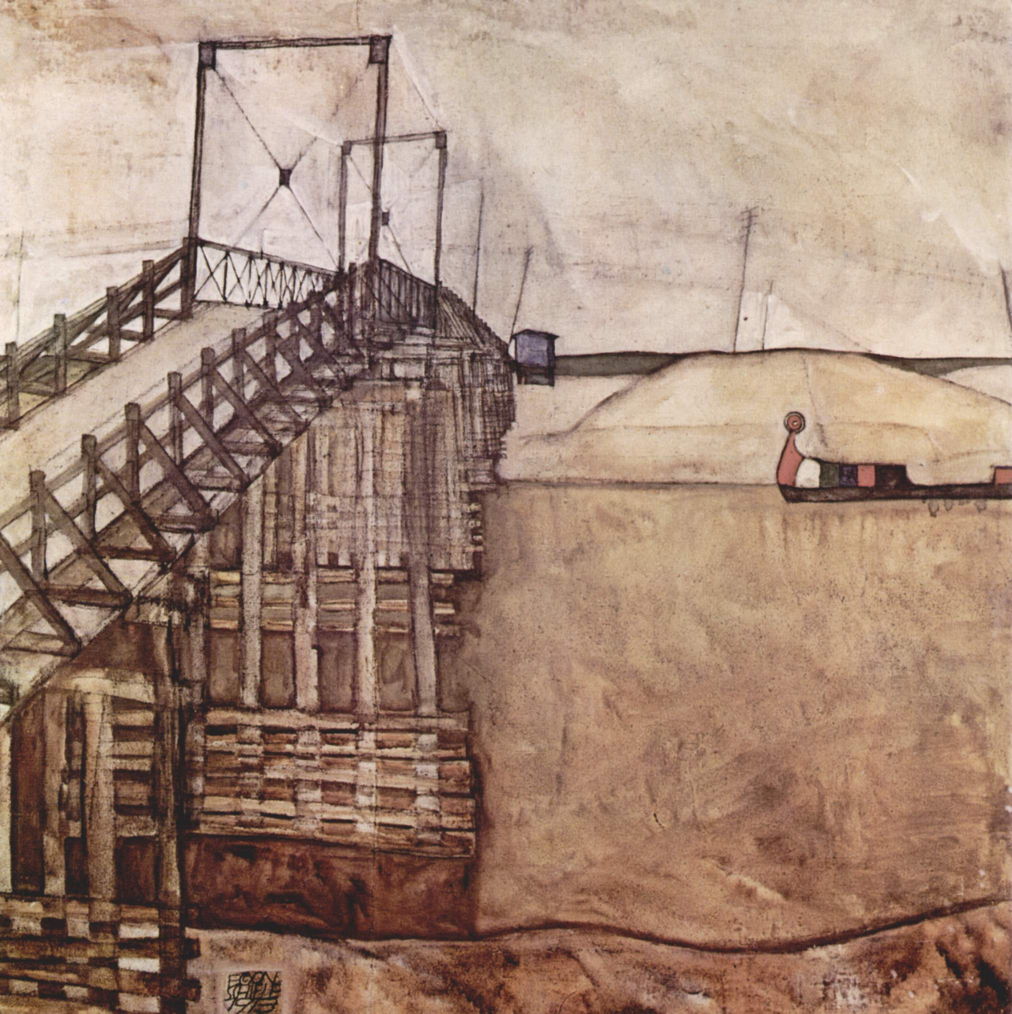 In the previous articles, we have seen how bridges were seldom prominent in landscapes painted before the nineteenth century, but were adopted as a theme by several of the Impressionists, who captured their growth and increasing diversity as railways and roads spread across Europe and North America.

Bridges weren’t only becoming more common, they were undergoing transition to something radically different from traditional stone arches. More industrial designs using steel components were transforming their appearance. The first suspension bridge, which hung a roadway from chain links rather than steel cables, was built in Pennsylvania in 1801, and during the late nineteenth century wire-cable suspension bridges were starting to become quite widespread.

Prominent in the background of Thomas Eakins’ The Champion Single Sculls (Max Schmitt in a Single Scull) from 1871 are two bridges constructed almost entirely of girders. The artefacts of man are here starting to dominate the trees and even the river itself.

Traditional stone arch bridges were becoming romantic signs of the distant past, as used by Carl Friedrich Lessing in his Landscape with Castle Ruins and Riders from 1878.

They also found a place in allegory, such as Walter Crane’s ingenious Bridge of Life from 1884. The baby born and breastfed in the left foreground passes through life, past Clotho who is spinning the thread of life and time at the upper right. That thread passes over the bridge, and Atropos cuts it on their death, in the right foreground.

Félix Vallotton pushed beyond even Gustave Caillebotte’s unconventional views of bridges in his Le Pont Neuf from 1901. One of the oldest of the great bridges of central Paris, Vallotton here uses a combination of unusual composition and perspective to make the familiar almost unrecognisable.

When Pierre Bonnard was painting the streets of Paris, he seldom included either the River Seine or its bridges. But in The Pont du Carrousel from about 1903, he was inspired by the golden fire of an autumn dawn/dusk near the Louvre and Tuileries. Just a few years later, this bridge, which had been a feature of the front of the Louvre since 1834, was rebuilt using beaten iron in place of its wooden framework, and later in the twentieth century it was replaced altogether.

Stranger still is Colin Campbell Cooper’s painting of Main Street Bridge, Rochester from 1908. Cooper was and remains best-known for his many works showing the skyscrapers of New York around the turn of the century, but this view might appear more Italian than American. The original bridge at Rochester, New York, was a modest wooden structure across the Genesee River, which was replaced in 1855-7 by one with five stone arches. Buildings soon started to appear on both sides of the bridge, making it appear as if it was a backwater in Venice or Florence, perhaps. Cooper captured this unique cityscape when the buildings had been completed, long before their removal during the 1960s.

Modern-style bridges were spreading through the cities and towns of many countries. In the early twentieth century, Adrian Stokes and his wife (arguably the better painter) paid several visits to Hungary. During their stay in its capital Budapest in late October 1909, before the collapse of the Austro-Hungarian Empire, Stokes painted this view of the Margaret or Margit Bridge, which had been built by French engineer Ernest Goüin and his construction company between 1872-76.

Along with the other bridges of Budapest, this was destroyed by Wehrmacht sappers in 1945. Its post-war reconstruction was hurried, and it had to be rebuilt to its former glory between 2009-11.

The Bridge at Karrebæksminde (1912) is Laurits Andersen Ring’s intricately detailed view of the bridge connecting the large and populous island of Sjælland (Zealand) in Denmark with the tiny rural island of Enø. The structure must date from the early nineteenth century when this short canal was dug to connect Karrebæk Fjord with the Baltic.

In December 1912, Egon Schiele was in Györ, in north-west Hungary, where he discovered a bridge which today might remind us of Vincent van Gogh’s Langlois Bridge. Schiele wrote that he felt it looked “quite Asiatic, as if Chinese”, and made a series of sketches of it. He developed those into this painting of The Bridge the following year.

Others, like Émile Claus in his Sunset over Waterloo Bridge from 1916, appeared to be following Monet’s series of paintings of London’s bridges in unusual lighting conditions.

Claus was followed a decade later by Lesser Ury, in his study of bridges seen in London in Fog (1926).

If there’s one painting of a bridge which encapsulates the great changes brought during the early twentieth century, it’s surely Joseph Stella’s Cubist masterpiece of Brooklyn Bridge, painted in 1919-20.

Brooklyn Bridge had first been suggested as early as 1800, but it wasn’t until 1870 that its construction began. After a long succession of problems, it was finally opened to traffic in 1883, so by the time that Stella painted it, it was already established as a major landmark. It joins what until then had been the separate cities of Brooklyn and New York, and was the world’s first steel-wire suspension bridge, although technically it’s more accurately described as a hybrid cable-stayed/suspension bridge.

Stella’s large geometric and Cubist painting not only reflects its form, but places it within the grimy industrial atmosphere of the city. It is perhaps the first truly twentieth century bridge.