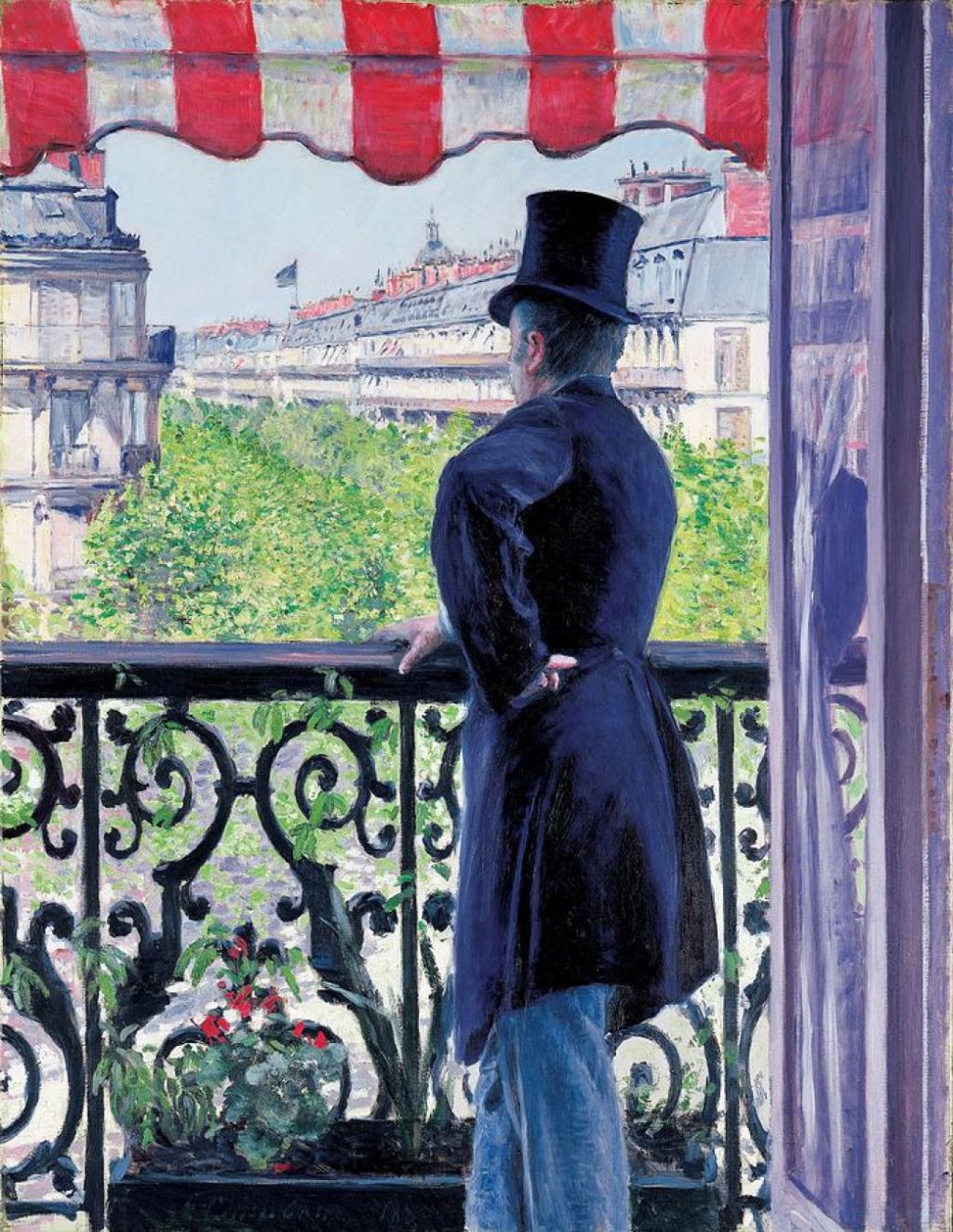 In yesterday’s opening article of this pair, I looked at paintings of balconies; today we get to join the rich and famous on their balconies, and look out and down on the world below. Before cheap and easy travel became available in the late nineteenth century, standing on a balcony was probably one of the more elevating experiences for most of the population.

There has been speculation as to whether Carpaccio’s Two Venetian Ladies from about 1490 were bored upper class wives, or courtesans in between gigs, although opinion currently favours their nobility. They sit amid a menagerie of peacock, doves and two dogs, staring into the blank distance.

Views from the balcony came of age in the early nineteenth century, with the arrival of paintings of figures standing in front of windows. These developed most obviously in German painting, in Caspar David Friedrich’s Woman at the Window of 1822, further elaborated two yars later by his friend and follower Carl Gustav Carus.

First came Carus’ Friedrichian Woman on the Balcony from 1824. High above the rolling wooded countryside of central Germany, a young woman dressed in black sits contemplating the view and facing away from the viewer. The artist tells us where he painted this view from, and adds some foreground detail which helps mystify the viewer. Unlike Friedrich’s work, there’s no play here between interior and exterior, though, just near and far.

When Carus visited Naples in about 1829-30, he stayed close to Castel dell’Ovo, and framed a view in his Balcony Room with a View of the Bay of Naples (via Santa Lucia and the Castel dell’Ovo). Instead of a figure, there’s a musical instrument, presumably to reinforce that this is Italy. The interior is mainly used for its framing and repoussoir depth.

After Manet’s The Balcony (1868-69), Berthe Morisot, who modelled for that and was soon to become his sister-in-law, painted her own Woman and Child on a Balcony in 1872. She uses the balcony primarily to combine full-length portraits of the two figures with an aerial landscape of Paris. The pillar and flowerpot at the right steer the eye from immediate foreground in a zigzag past the figures to end in the far distance. On the skyline just to the left of the woman is the dark mass of Notre Dame.

It was Gustave Caillebotte who recast and modernised the precedents by Friedrich and Carus for his painting of his brother René, Young Man at His Window, in 1875.

Strictly speaking, Caillebotte’s younger brother René isn’t on a balcony here, merely standing in front of a balustraded window in the family apartment on the rue de Miromesnil in Paris. But the artist has here realised the interplay between the rich red upholstery of the interior and the bright exterior with its pale buildings and trees. Between those two worlds is a substantial stone balustrade. Caillebotte gives his figures the mysterious anonymity of facing away from us too.

This painting was shown at the second Impressionist exhibition the following year.

Five years later, Caillebotte embarked on a series of paintings from the balconies of his apartment, of which the best-known is Man on a Balcony, Boulevard Haussmann (1880). The interior has been replaced by intermediate details: a trough of flowers, the ornate iron balustrade, and a colourful awning. This time his painting was accepted for the Salon, where it was exhibited in 1882.

Less well-known are two views looking along the length of A Balcony (1880), above, and another Man on a Balcony (1880), below. Both are revelatory, showing the faces of their figures who are looking across our direction of view, down at the exterior world below. Both are strongly projected to a vanishing point close to one edge of the canvas. And the view above places the head of one of its two figures at that focal point.

Caillebotte went on to paint a couple of tightly-cropped images showing small sections of balustrade with the trees and buildings below. Finally in 1884, he bought Manet’s The Balcony for his private collection.

The Norwegian painter Hans Heyerdahl, who was living in Paris at the time, responded with his close-cropped At the Window in 1881 (above), and the following year his compatriot Christian Krohg painted his Portrait of the Swedish Painter Karl Nordström (below) using the same artistic device. Krohg didn’t paint this in Paris, but as he neared the end of his time in France in the artists’ colony of Grez-sur-Loing, during the Spring of 1882.

Heyerdahl engages deeply in the interplay between the woman’s interior world, with a half-open book on her lap and her distant gaze towards the bright exterior.

Prior to this development of the themes of Friedrich and Carus, balconies had often played minor roles in portrait paintings. Maybe the sitter leaned on a section of balustrade, or a flowerpot cascaded its blooms from a pillar. In the late nineteenth century, balconies acquired greater prominence in a wide range of portraits and figurative paintings.

Some of that was undoubtedly the result of their increasing availability: with the growth of cities, balconies became popular features of upmarket city apartments, particularly those in Paris.

This portrait of Maximilien Luce’s (then unmarried) partner and model Ambroisine ‘Simone’ Bouin, Madame Luce on the Balcony from 1893, is an example with objects from its interior set out in the outside sunshine.

Richard Bergh’s Nordic Summer’s Evening (1899-1900) features two distinguished models, Prince Eugen, Duke of Närke, and the singer Karin Pyk, who were both close friends of the artist. In fact, it’s a wonderful composite: the pillars shown were borrowed from the floor below, where they supported this balcony, and Pyk was actually painted when she was in Assisi in Italy.

Its figures look not at one another, but their gazes cross paths as they stare at the still parkland beyond, lit by the low sun.

We can only imagine the ‘cheating’ that Isaak Brodsky must have contrived to paint this marvellous Self-portrait with Daughter in 1911. Here, the balcony is an integral part of an aerial precinct in the town; there is no sight of ground level. Brodsky’s world exists a couple of stories above.

Lovis Corinth painted his Balcony Scene in Bordighera in 1912 early during his convalescence in the Midi after his stroke the previous year.

The scene in Nikolay Bogdanov-Belsky’s Lady on a Balcony appears more relaxed. His sitter, I.A. Yusupova, looks to be enjoying the fine summer weather in Koreiz, not far from Yalta, on the northern coast of the Black Sea. At about this time, though, the Balkans were plunged into crisis following the assassination of Archduke Franz Ferdinand, and by the end of July the Great War had begun. During its closing stages, the Crimean Peninsula was swept up in the Russian Civil War, and changed hands every few months, with tens of thousands being massacred during the chaos.

The last artist whose paintings I show here had a lasting fascination for painting views through windows, which extended to the balconies which he had added to his homes: Pierre Bonnard.

In La Fenêtre (The Window) from 1925, Bonnard frames the view from his villa in Le Cannet looking inland, and includes part of the all-important balcony.

One of his fullest views of a balcony comes in The French Windows with Dog from 1927, where our gaze is led from its interior, out through the French windows, over the decking and wooden balustrade, to the palms and town of Le Cannet beyond.

The view from the balcony is quite a journey through life.