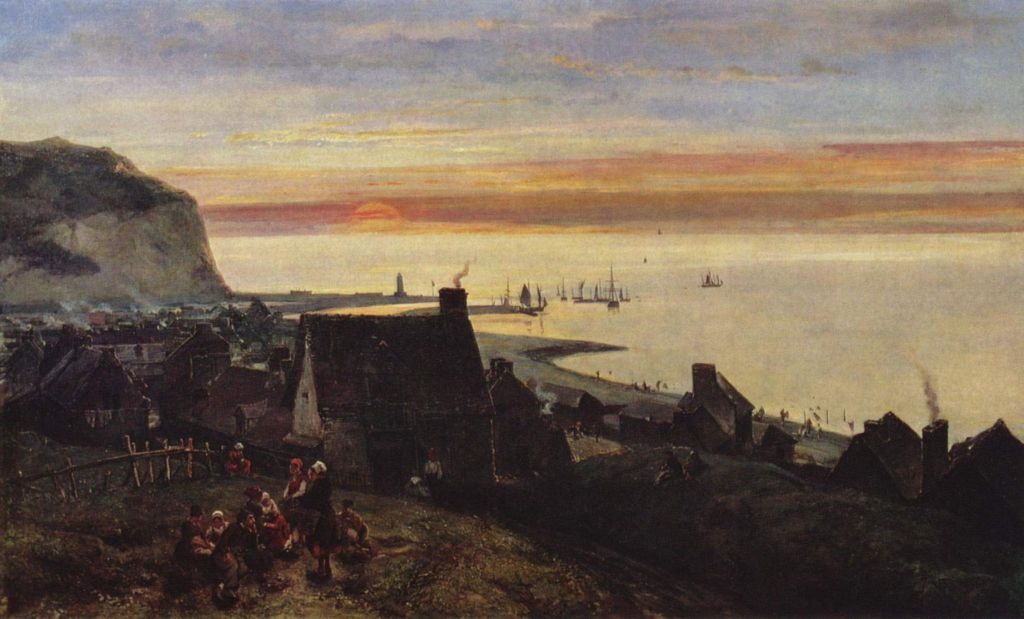 Four great painters who are candidates for the role of First Impressionist, before Monet, Pissarro, Renoir and the rest of the core members of the movement in France, include:

As Jongkind was born two hundred years ago next month, and was as old as Gustave Courbet, this is the first of a short series of articles to celebrate his career, work, and his influence on Impressionism.

Jongkind was born in Lattrop, in the Netherlands, near its border with Germany. He trained at the Drawing Academy in the Hague from 1837, before moving to Montmartre in Paris in 1846 at the invitation of Eugène Isabey (1803-1886), who became his next teacher. Isabey is another underrated artist whose romantic landscapes merit greater attention.

During trips to Normandy and Brittany in 1847, Jongkind got to know several established painters, including the younger William-Adolphe Bouguereau (1825-1905) and Alexandre Cabanel (1823-1889), both destined for fame and success in their history painting. In 1848 Jongkind’s first painting was accepted by the Paris Salon, with a second following in 1850.

Jongkind’s fine View of Maassluis in Winter from 1848 is a good example of his early work, presumably painted when he was back in the Netherlands during the winter. Following the long tradition of landscape painting in the Netherlands, he sets his horizon low and paints a wonderful winter sky. Underneath that, the locals are skating along a frozen canal.

He painted this sketchy watercolour Self-portrait in August 1850, adding annotations in 1860 to the effect that he is standing in Montmartre in Paris, which was still relatively rural at the time.

Here, from about the same year, is a View of Montmartre showing its tumbledown cottages, rustic horses and carts on mud tracks, and three distinctive windmills on the skyline.

For these paintings, Jongkind received critical acclaim from the likes of Baudelaire, and later Émile Zola, but did not enjoy commercial success, although one of his paintings was bought by the French State.

In 1851, he seems to have travelled west to Brittany, where, not far from the port of Brest, he painted this view of Rue Saint-Thomas in Landerneau, with its cobbles and hanging carcasses outside a butcher’s shop. His brushwork is loosening up already.

The following year, he painted this classic view of Paris, Notre-Dame Seen From Quai de la Tournelle (1852) with its slightly higher horizon. Notre Dame is seen here before construction of its spire, added the following decade, which was recently and so tragically destroyed by fire.

The same year, Jongkind campaigned along the north coast of France, in Normandy. This View of Harfleur from 1852 shows an interesting combination of architectural precision in the church spire and the more painterly in the vaguer forms around the river.

If I had to pick one of Jongkind’s paintings which most heralded Impressionism, it would be this marvellous view of Étretat Harbour, painted in the rich colours of sunset in 1852, more than a decade before Monet. Unlike most of the later Impressionist views, it shows the famous chalk cliffs from the small fishing port and village.

Probably from slightly later, Jongkind’s Frigates, The Port of Harfleur (c 1852-53) is more tight and detailed, the rigging and sails painted more conventionally.

In 1852, Jongkind again had success in the Salon, receiving a third class medal. The following year, he met Gustave Courbet, Thomas Couture, and Nadar, the photographer who was later to host the first Impressionist Exhibition. He also managed to sell some of his oil paintings and watercolours at last, and in the autumn he visited London for a week.

Jongkind continued to paint views of Paris, including this superb View from the Quai d’Orsay from 1854. Made near what is now the Musée d’Orsay on the bank of the River Seine, at this time it was a working quay serving a busy part of the city. On the bank was the Palais d’Orsay, which had originally been intended to be the Ministry of Foreign Affairs when it was built in 1838, but was then being used by the Court of Accounts and the State Council.

Less than twenty years later, during the Paris Commune of 1871, the whole area was burned to the ground, and later redeveloped for the railway station which in turn became the Musée d’Orsay, appropriately holding one of the finest collections of Impressionist painting in the world.

This much looser dusk River View in France from 1855 is claimed to have been painted near Pontoise, and shows an important Impressionist theme, of the industrialisation of the country around Paris. Its facture is decidedly rough, with obvious brushstrokes; in the distance are the poplars which Monet was to paint in series, and two windmills on the skyline.

Later that year, still struggling for success, Jongkind returned to the Netherlands, where he set up his studio in Rotterdam.

Wikipedia
Association of the Friends of Jongkind