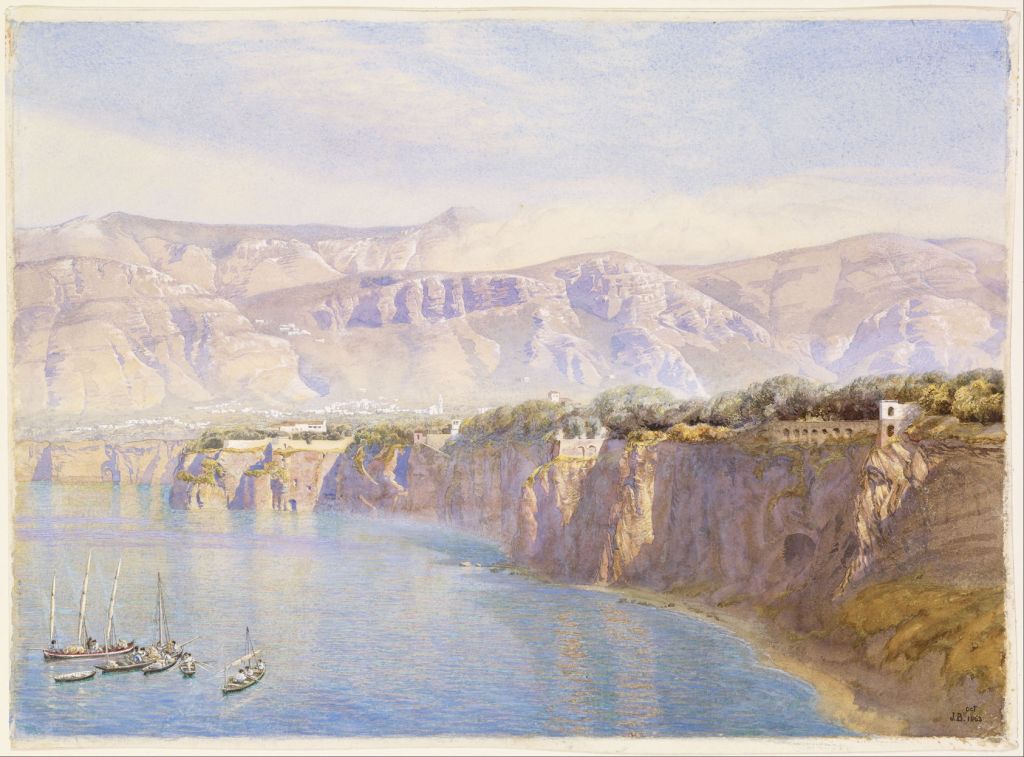 Watercolour is the most inappropriately-named of the popular painting media. Oil paint uses drying oils as its binder, egg tempera uses the yolk of eggs, and glue tempera various types of glue. Water is, of course, not the binder in watercolour, but the diluent, used to turn blocks of hard pigment and gum binder into liquid paint. Water is also the diluent for several other media which aren’t called watercolour, including fresco, glue and egg tempera.

The binder distinctive to watercolour and gouache is gum derived from trees, in particular gum arabic, made from the hardened sap of acacias. This was probably introduced progressively during the Middle Ages, at least in Europe, when it was produced in Arabia and west Asia. Gum arabic is now almost entirely produced in Sudan and neighbouring areas.

Like the animal glues in glue tempera, gum arabic redissolves when wetted. It doesn’t form a ‘permanently’ bonded paint layer in the way that drying oils or egg tempera do.

Watercolour paints were made by grinding pigment with water containing gum arabic, then forming the paste into small dried cakes. Varying amounts of filler, such as chalk, can also be added to the paint to reduce the intensity of the colour, and to make it opaque when applied. Gouache paints are intended to be fully opaque, but undergo significant colour shift when they dry. ‘Pure’ watercolour paints normally have some degree of transparency, while those which are more opaque are often referred to as bodycolour, gouache, or opaque watercolour.

There is no absolute distinction between watercolour and gouache, nor between paintings which use the white of their paper support as their whitest tone, with transparent paints, and those in which chinese white paint is the whitest tone, with opaque paints.

The former transparent technique has become associated with an ‘English School’ which is neither English nor a coherent school. The latter opaque technique has also been used extensively in illustration and design, which has only added to its patronising treatment by those who consider that they are practitioners of ‘pure watercolour’ technique.

In reality, many of the greatest watercolour artists use both transparent and opaque watercolour paints, and form highlights using ‘reserved’ white from the paper support and with opaque white paint.

Small works incorporated into manuscripts and books – miniatures – were probably the first true watercolour paintings, although they are not usually included in the history of the medium. Further to the east in Asia, inks based on dyes and water were long predominant, and ‘true’ watercolour painting wasn’t introduced until much later.

Watercolour first became established as a major painting medium in the Renaissance, most particularly in the paintings of Albrecht Dürer, one of the first major and most innovative watercolour artists.

Dürer travelled extensively through Europe, making views such as this fine landscape of the town of Trento, which is the more remarkable for its extensive use of reserved white space and transparent paints. Works such as this were therefore effectively the foundation of the ‘English school’ by a German.

These topographic views were the precursors to a whole industry which was to create similar views of towns and countryside throughout Europe over the following centuries. Dürer uses a range of sophisticated techniques, including the use of layers, and there are passages which appear to have been painted over when the underlying paint was still wet – wet on wet or wet in wet technique.

Dürer also initiated the use of watercolour in specialist genres – here the recording of wildlife, which he extended to include birds and botanical painting.

At about the same time, artists in the southern Renaissance were turning to watercolour to lay out works to be implemented in other media, such as fresco and tapestry. Some of the most remarkable early examples are Raphael’s ‘cartoons’, although some were probably painted in distemper (glue tempera) rather than gum-based watercolour.

Raphael’s The Miraculous Draft of Fishes (c 1515-16) is among the earlest large and complete paintings using opaque watercolour. Because of limitations in the manufacture of paper at the time, it was made on many sheets which have been mounted on canvas.

The Old Masters also used the medium when painting in front of the motif, to create studies for use when painting finished works in oils, for example, as shown in this landscape sketch in mainly opaque watercolour by Rubens.

Gainsborough was another oil painter who made many fine watercolour studies. Today, some appear to have been painted in a limited range of colours, although that may be the result of fading of the fugitive pigments which were used. Because watercolour produces a very thin and essentially unprotected layer of paint, it leaves pigments vulnerable to discoloration from atmospheric pollutants and fading from exposure to light. As a result, framed watercolours are often protected behind glass.

By the end of the eighteenth century, there were some artists – particularly those like Giovanni Battista Lusieri who made landscape views – who worked almost entirely in watercolour. His large panorama of the Bay of Naples had to be painted on six sheets of paper, and uses a combination of transparent technique and opaque paints in extreme photorealism.

As people started travelling more, and upland and coastal areas were visited by those in search of the ‘sublime’, increasing numbers of artists turned to watercolour for making topographic views. Although most were formulaic if not illustrative, artists like Alexander Cozens used watercolour in more sophisticated paintings.

Cozens developed specialist techniques, such as keeping ‘reserved space’ to let his white paper ground show through, wet on wet as well as wet on dry application of paint, and scratching out. He also employed both transparent and opaque paints.

Throughout Europe, watercolour became a rival to oil paint for landscape painting. Those making oil sketches en plein air tended to gravitate around Rome and in southern Europe, where the weather was more consistent, and its warmth allowed oil paint to become touch-dry far more quickly. In northern Europe, particularly the British Isles, cooler temperatures and shorter breaks of good weather made watercolour sketches more practical, and this helped the development of the medium as the choice of most landscape painters there.

The main innovators were a trio of major artists: Thomas Girtin, John Sell Cotman, and JMW Turner. Between them, they transformed not only watercolour painting, but painting as whole.

Of the three, it was probably Thomas Girtin who was the most brilliant, but he died very young in 1802, having progressed rapidly from traditional views to more lyrical works, such as The White House at Chelsea (1800), in just a few years.

In the brief lull between the French Revolution and the Napoleonic Wars, JMW Turner started to travel beyond the British Isles, and was already using a range of specialist techniques when he returned to paint his dramatic views of the Alps.

Turner’s later watercolours (and oils) dispense with the rigorous form which had been the mainstay of the painter of views, and influenced subsequent painting in all media throughout Europe.

Despite the snobbish attitudes of some purists in Britain, judicious use of opaque watercolour with transparent technique brought some breathtaking results, such as John Brett’s highly detailed view Near Sorrento (1863).

Meanwhile in France, Eugène Delacroix not only made studies for finished oil paintings using more opaque paints, but he used a range of advanced techniques with them, as shown in his spirited Horse Frightened by Lightning (1825-29).

During the nineteenth century, watercolour became the preferred medium for most women painters, who had previously often used pastels. Considered to be much less messy than oils, and less dusty than pastels, watercolour paint is easier to remove from skin and clothing, and its use of water as the diluent and cleaning solvent was seen as more socially acceptable.

Gustave Moreau was one of the greatest French exponents of watercolour during late nineteenth century. He seemed able to switch between oils and watercolours with ease, such that this watercolour version of The Apparition (c 1876) was shown at the Salon, following which he painted a version in oils.

Moreau’s The Fall of Phaeton (1878) shows rather better his almost comprehensive variety of techniques.

North America also saw a rise in the use of watercolours by both professional and amateur painters. In addition to their specialist use by the bird painter John James Audubon, and by some of the Hudson River School for landscapes, Winslow Homer was among the foremost practitioners. He developed his techniques and style during his stay in the English fishing community of Cullercoats in 1881-82, when he painted almost exclusively in watercolour.

Many of his paintings from that period are fine examples of the use of advanced techniques, here including both transparent and opaque paints, rewetting and blotting to remove paint for highlights, scraping, application of wax to resist the adherence of paint, and the use of pure gum solution as a glaze.

By the end of the nineteenth century, watercolour had become established as the medium of choice for many important artists, as well as the most popular among amateurs. It was widely available in cakes which were most suitable in small portable kits for painting en plein air, in pots, and tubes. Brush suppliers offered a wide range of specialist brushes designed to hold water and facilitate watercolour techniques. Most importantly, it had displaced the use of oils in most educational establishments, ensuring that future generations of painters would see watercolour as a first class medium, not just an elaborate means of drawing.

Marie Spartali Stillman, one of the last survivors of the Pre-Raphaelite movement, developed elaborate layered techniques which are still not fully understood. In this particular painting, Love’s Messenger from 1885, she has also incorporated tempera and gold paint, together with more opaque technique. Apparently her use of layers was painstaking, and prone to failure, which sometimes forced her to abandon paintings.

Paul Cézanne turned to watercolour for some of his most remarkable paintings late in his career.

Cézanne’s most unusual watercolours are late landscapes, such as his Almond Trees in Provence (1900). These have no parallel among his works in oils, and typically have very large areas of reserved space, with selected forms such as the almond trees here painted using flares of concentrated colour.

John Singer Sargent was one of the most prolific and accomplished watercolour painters after JMW Turner, and used a full range of specialist techniques in his extremely painterly works.

Sargent’s watercolours of Venice, here Scuola di San Rocco from about 1903, appear to have been painted with masterly ease.

Many of his best watercolours are rich in marks, which only make sense when assembled into the whole.

Paul Signac painted many brilliantly-coloured views of the south of France using various combinations of watercolour and crayons. Some of these, such as Antibes (1917), also have substantial amounts of reserved space, although still far less than Cézanne’s late watercolour landscapes.

Since then, watercolour has shown its flexibility in supporting new styles and techniques. A glance through the work exhibited at any of the major watercolour societies’ exhibitions will reveal a huge range, from realist pure transparent methods to abstract mixed media.

The most recent technical development has been the adoption by one paint manufacturer of a replacement binder for traditional vegetable gum: QoR paints are based on a synthetic polymer Aquazol® which has been used extensively as an adhesive and consolidant in the conservation of fine art. Coupled with synthetic varnishes and more lightfast pigments, it is likely to result in watercolour paintings which are far more robust than those of the past.