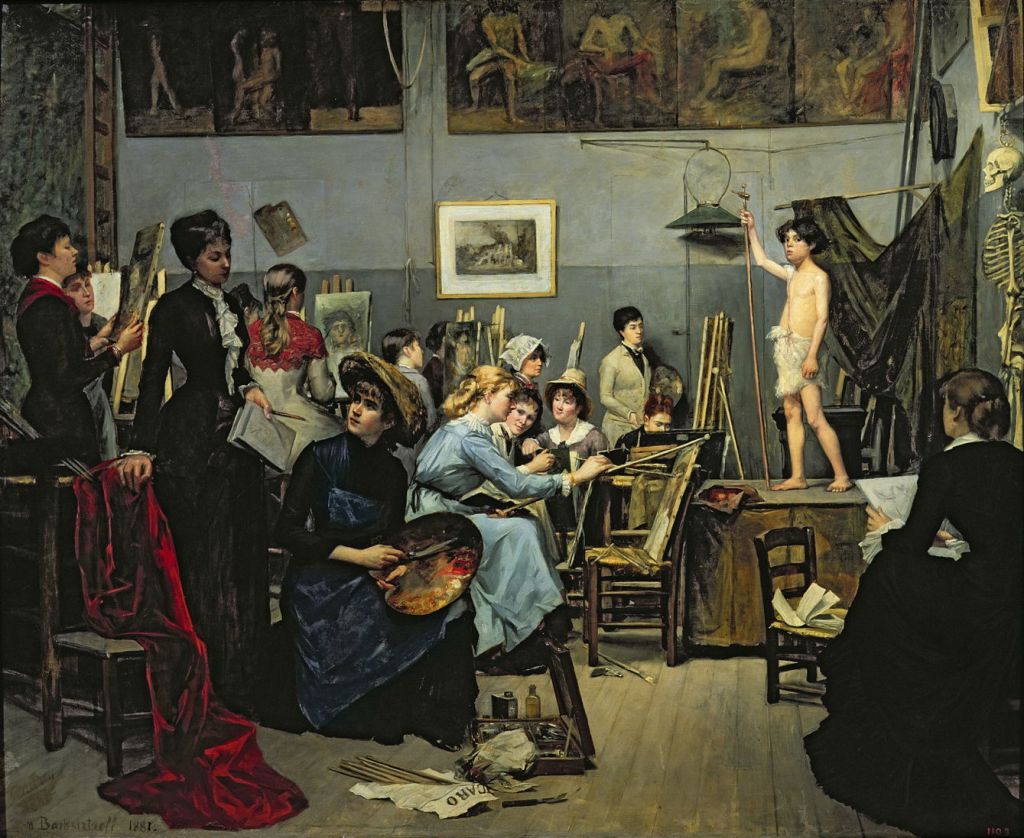 Tony Robert-Fleury (1837-1911) was an academic history painter who devoted much of his career to teaching at the Académie Julian. From 1880, unlike the École des Beaux-Arts in Paris, the Académie admitted women and taught them a full curriculum including painting from life. The Académie also welcomed students whose first language wasn’t French, at a time when the École des Beaux-Arts required its students to pass a very demanding French language exam.

As a result, a great many non-French and women students trained at the Académie. Here are some of the more famous students known to have studied in Tony Robert-Fleury’s teaching studio there.

Lovis Corinth (1858–1925) had completed his training in Munich in 1884, then moved to Antwerp for a few months, before he settled in Paris in the autumn of that year. There he enrolled in the Académie Julian, where he studied under Bouguereau and Robert-Fleury, and concentrated on female nudes and building a repertoire of mythological scenes. He was influenced by the 1885 retrospective exhibition of the works of Jules Bastien-Lepage, who had died suddenly in 1884, and this moved his style towards greater naturalism.

Cecilia Beaux (1855–1942) had established herself as a successful portraitist in Philadelphia, PA. Although she commanded high fees for her portraits, she recognised her need for further study, and in 1887 went to Paris, accompanied by her cousin May Whitlock. There Beaux trained at the Académies Julian and Colarossi, mainly with Tony Robert-Fleury and William-Adolphe Bouguereau.

Dora Wheeler Keith (1857-1940) was another American, who was taught by William Merritt Chase from 1879-1881, one of his first pupils. She went on to study at the Art Students League in New York, then spent two years at the Académie Julian in Paris. In lieu of one of her paintings, I show William Merritt Chase’s portrait of her from 1883.

Lydia Field Emmet (1866-1952), who came from New York, attended the Académie Julian in Paris in 1884-5, with her older sister. They returned to New York to study with Chase and others, then returned to Paris to study under Bouguereau, Collin, and Tony Robert-Fleury. Her paintings remain in copyright.

Maria Konstantinovna Bashkirtseva (Мария Константиновна Башкирцева), better known as Marie Bashkirtseff (1858–1884), was born in an affluent and noble family in Gavrontsi, near Poltava in central Ukraine. She grew up travelling around Europe with her mother, eventually settling in Paris. She originally hoped to be a singer, but after an illness ruined her voice, decided to be an artist. She then studied with Tony Robert-Fleury from 1877, who remained her teacher throughout her brief career, and at the Académie Julian, in Paris.

A self-assured painter from the beginning, she set her sights high and had the ability and drive to paint very well indeed. Her early Self-portrait with Palette (1880) was painted in the same year that she first had a painting accepted for exhibition at the Paris Salon, and she was successful again in subsequent years until her tragically early death in 1884, at the age of only 25.

While Bashkirtseff was still studying at the Académie Julien, she painted In the Studio (1881), which gives the clearest insight into what her training was like. Her class was of course entirely female.

Sir George Clausen (1852–1944) was part Danish, being the son of an interior decorator from Denmark, and part Scottish from his mother. Born and brought up in London, he was apprenticed to a London firm of decorators at the age of 14, and worked in their drawing office.

He attended evening classes in South Kensington, London, at the Government Art Training School (which later became the Royal College of Art), where he obtained his art teacher’s certificate in 1877. During this period he also visited France, Belgium, and the Netherlands; while he was in France he studied under Bouguereau and Robert-Fleury.

Édouard Vuillard (1868–1940) moved to Paris with his family in 1878. His father died in 1884, and Vuillard’s education was funded by scholarship to the Lycée Condorcet, where he made friends with Ker-Xavier Roussel and Maurice Denis. The following year, he moved on to the studio of Diogène Maillart, and from 1886-88 he studied at the Académie Julian under Tony Robert-Fleury. Two years later, Vuillard met Pierre Bonnard and Paul Sérusier, who also joined the Nabis.

Ker-Xavier Roussel (1867–1944) was born in Lorry-lès-Metz, Moselle. At the age of fifteen he studied at the Lycée Condorcet in Paris; alongside his friend Édouard Vuillard, he also studied at the studio of painter Diogène Maillart. In 1888, he enrolled in the École des Beaux-Arts, and soon began frequenting the Académie Julian, where he was taught by Tony Robert-Fleury. Roussel, Maurice Denis and other students there formed the group Les Nabis.

Eight major painters, several of whom were key in the history of art after Impressionism, all taught by Tony Robert-Fleury. His own paintings may be largely forgotten today, as with those of his father, but they live on through their teaching and those former pupils.