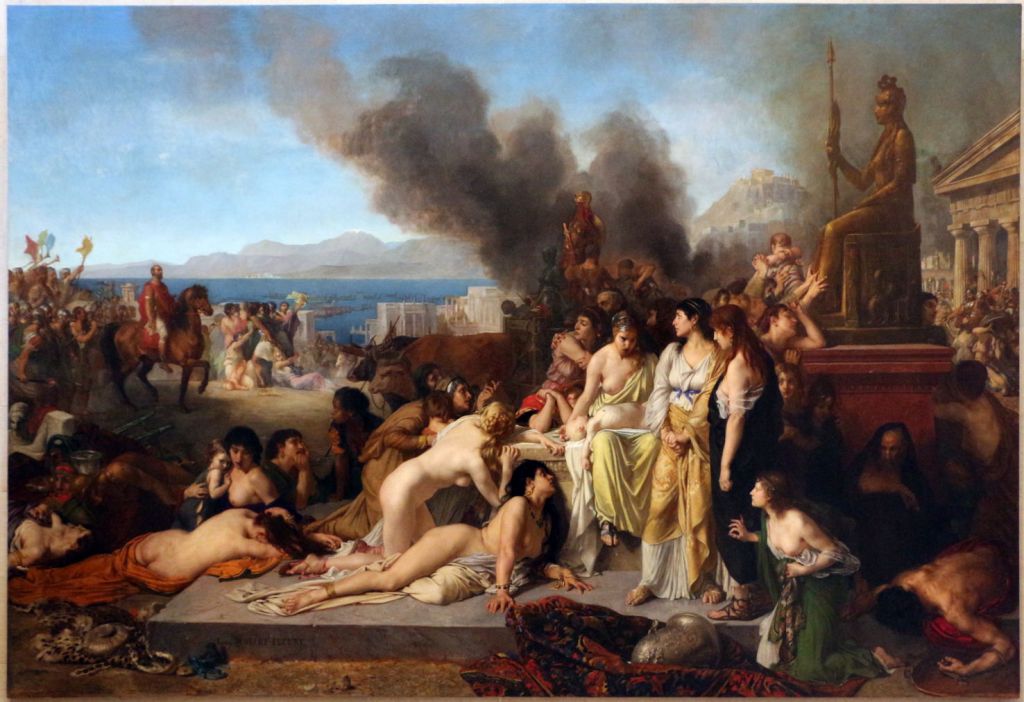 It’s commonly thought that the last time that Britain was invaded was by the Normans in 1066. In fact it was by an American Colonel in 1797 on behalf of Napoleon. He landed at Fishguard in Wales, and survived three days before surrendering his forces.

That same year, when Napoleon’s forces were more successful in continental Europe and captured Venice, ending eleven hundred years of its independence, the French painter Joseph-Nicolas Robert-Fleury was born in Cologne. Showing precocious artistic talent, he was sent to Paris, where he became a pupil of Girodet and Baron Gros at the Institut de France.

Girodet was another brilliant artist, who when Robert-Fleury was still an infant, got his revenge on a courtesan whose nude portrait he had painted, but he had been left unpaid and she had insulted him further by describing his work as unflattering. He quickly painted another showing her in her true light, in the role of Danaë, which he substituted for the original at the Salon of 1799.

Among Robert-Fleury’s fellow students in the workshop of Baron Gros were Paul Delaroche and Richard Parkes Bonington.

Joseph-Nicolas Robert-Fleury flourished as a history painter following his first major success at the Salon in 1827.

Robert-Fleury’s Scene of Saint Bartholomew from 1833 shows one small scene from the Saint Bartholomew’s Day Massacre of 1572. This was a targeted wave of murders of French Protestants by Catholics, largely instigated by the mother of King Charles IX, Catherine de’ Medici. This may show the most notorious of the killings, of the respected Admiral Coligny, who was dragged from his bed, and his body thrown out of the window.

His 1840 painting of Baldwin of Boulogne Entering Edessa in February 1098 refers to one of the early successes of the First Crusade, in which Baldwin became the ruler of a new crusader state of Edessa, established in the land to the south of modern Turkey.

Robert-Fleury’s Looting of a House in the Giudecca in Venice During the Middle Ages from 1855 shows opression of Jewish inhabitants of Venice. They were eventually forced to live in the original ghetto in Cannaregio in the city, to which they were confined in 1516, making it the first such ghetto in the world. Note that the island in the Venetian archipelago which is known as Giudecca is quite different.

That year Robert-Fleury became director of the École des Beaux-Arts in Paris, and the following year was appointed director of the French Academy in Rome, perhaps the supreme honour for a history painter of that time.

In 1837, Joseph-Nicolas Robert-Fleury’s son was born. Tony Robert-Fleury (1837–1911) also showed early talent, and was taught by his father before going on to study under Paul Delaroche and Léon Cogniet at the École des Beaux-Arts in Paris.

Like his father, Tony Robert-Fleury painted densely-populated scenes of disaster. His first great success was at the Salon of 1866, where he exhibited a scene of the Polish uprising of 1861 in Warsaw, which was crushed by Russian troops. I regret that I have been unable to locate a suitable image of that work, which might even have been lost.

His spectacular painting of The Last Day of Corinth from about 1870 imagines Livy’s account of the day prior to Roman soldiers looting and sacking this Greek city in 146 BCE. This wasn’t a simple historical reference, though: the ancient city of Corinth was rebuilt, and flourished under Roman rule. Then in 1858, that was completely destroyed in an earthquake, following which the modern city was built closer to the coast. Since then, Corinth has been razed to the ground by another earthquake in 1928, and by a great fire in 1933.

His portrait of Charlotte Corday at Caen in 1793 probably from 1875 is of great relevance to French history. Corday was the woman who, in 1793, murdered the revolutionary leader Jean-Paul Marat, for which she was guillotined on 17 July of that year. She is shown reading Plutarch’s Lives, which she is claimed to have used to inspire her singularly brave act.

Marat was a close friend of the artist Jacques-Louis David, whose most famous painting is of The Death of Marat (1793). David was in turn teacher of Girodet, who taught Tony Robert-Fleury’s father Joseph-Nicolas.

Robert-Fleury’s Pinel, Chief Physician of la Salpêtrière Hospital in 1795, probably from 1876, shows the newly-appointed Philippe Pinel enforcing more humane treatment of the patients at the huge psychiatric hospital in Paris, by having their chains removed and caring rather than restraining them. I’m afraid that the image of the whole painting above is not of good quality; that below shows its central section rather better.

Pinel (1745-1826) was a pioneer of modern psychiatry whose career benefitted from the French Revolution. He was appointed chief physician at the Hospice de la Salpêtrière in 1795, when it was home to seven thousand women, most of whom were old and ailing. Although considered today as practising in psychiatry, he was actually a professor of medical pathology at the time. He was largely responsible for the first formal classifications of mental illness, which he published in 1798.

Tony Robert-Fleury started to teach at the Académie Julian in Paris, where he ran one of its teaching studios, alongside that of Jules LeFebvre. In tomorrow’s article I will name some of his most famous former pupils, and show examples of their paintings.