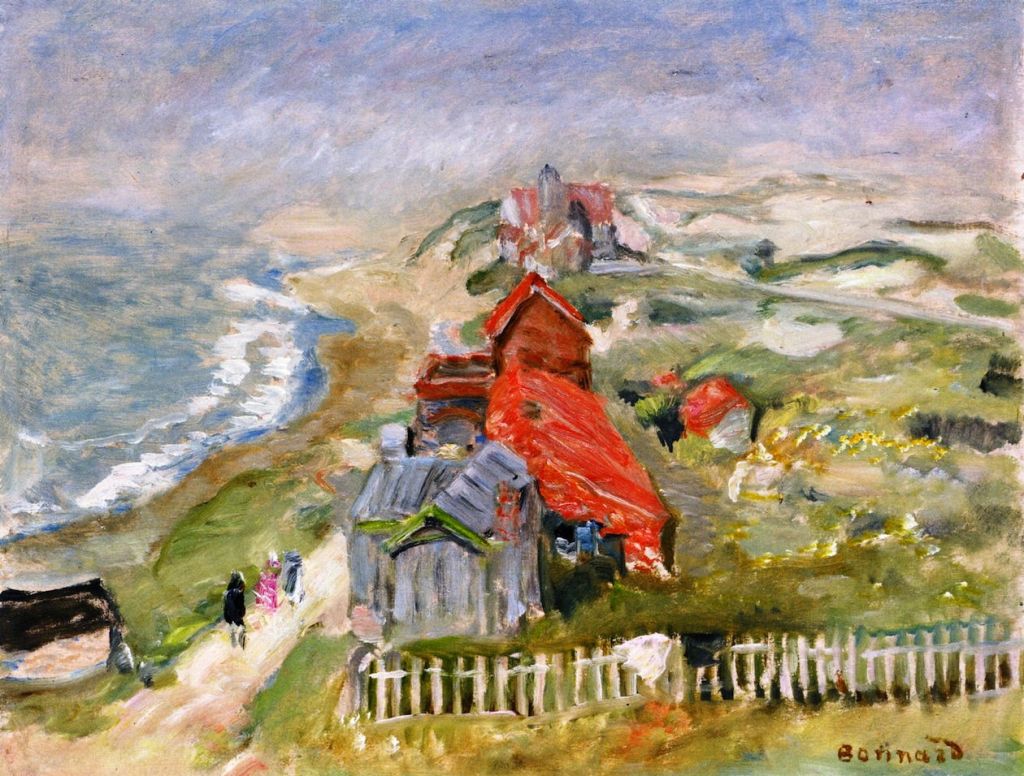 Although there remains some uncertainty over the exact year of his birth, modern opinion is that Jacopo Tintoretto was born half a millenium ago, in 1518. I therefore took the opportunity to celebrate this major anniversary; an introduction and contents of the series of articles is here.

Tintoretto is out of fashion at present, but considerable scholarship has recently been devoted to assembling a chronological checklist of his ‘authentic’ works, on which I based my account. Here I show just two of my favourites.

Tintoretto’s Susannah and the Elders from about 1555, one of the great treasures of the Kunsthistorisches Museum in Vienna, Austria, is a uniquely inventive composition of this popular Biblical story.

For a start, Susannah is still blissfully ignorant of being watched by the evil elders, but the viewer is not. This puts the viewer in that uncomfortable predicament of knowing what is going on (wrong), equally knowing that its actor is unaware. You can find a full reading of this exceptional painting in this article.

Another of my favourites is The Origin of the Milky Way, probably painted between 1577-79, one of the great treasures in the National Gallery in London.

This shows the infant Hercules being pulled away from Juno’s breast by an anonymous assistant, with fine streams of milk gushing upwards to generate individual stars, and downwards to form lilies. In the background, Jupiter’s eagle has a crablike object in its talons, perhaps representing the constellation of the Crab (Cancer), and Juno’s peacocks are at the right. My fuller account of it is here.

Jean-Léon Gérôme is too often thought of as a crowd-pulling commercial painter. Reading his paintings in depth, though, reveals that there is much more to them than the quest for profit. For example, in Too Real: the narrative paintings of Jean-Léon Gérôme, 4 I considered what is perhaps his most famous work.

Gérôme started work on Pollice Verso before 1869, but had temporarily abandoned it during the Franco-Prussian War. It was not, therefore, intended as comment on that war, nor about France’s sudden transition from Second Empire to Third Republic.

Instead, Gérôme looks at the power of expression – here, a small gesture of the hand – in his favourite context, the Roman gladiatorial arena, which he had fallen in love with when he was first in Rome in 1843. It also develops a theme from his earlier Ave Caesar: that of spectators and their complicity in the horrific events taking place in front of them.

His earlier paintings of the arena had been somewhat troubled by difficulties in achieving historical accuracy, in armour, weapons, and other details. Far from being a flight of fancy, Gérôme had spent a great deal of time and effort trying to make everything shown in this painting as historically accurate as possible at the time. For the artist, the success of the painting depended on its fine details.

To be able to bring out those fine details, and the thumb gesture which was central to its title and theme, Gérôme had to draw in from the wide-screen spectacle of Ave Caesar, and concentrate on the gladiators, and a small section of the spectators, including the emperor, his court, and those closest to him – a row of six Vestal Virgins, to the right.

The victorious gladiator stands with his right foot on the throat of the loser. He looks up at the crowd, to see whether he should kill that loser, indicated by thumbs pointing downward, or should spare his life, shown by thumbs pointing up. The title confirms what we can see: thumbs are down, and the gladiator on the ground is about to be brutally killed.

Last year wasn’t an anniversary for Pierre Bonnard, but the first opportunity that I have had to reproduce many of his paintings after their copyright finally expired. I had been waiting a year or so for this, so examined his work in detail. The first article in this series covers his early Japonisme and the Nabis, 1888-1892.

Two themes which he returned to over many years were mirror play, and the framing of external views by French windows.

In 1916, Bonnard painted one of his most complex, and carefully-composed works of mirror play: The Mantlepiece. He assumes an unusually low position, level with the surface of the mantlepiece and looking slightly up. Behind him is his nude model, who is unusually lit. On the wall behind her is a very long painting of a reclining nude, below which is a dressing table mirror with its fragmentary reflection reflected a second time in the large mirror. This fuses several disjoint images into one.

The best-developed of his framed external views is The Breakfast Room (Dining Room Overlooking the Garden) from 1930-31. This combines the still life of the laid table in the foreground, the powerful vertical framing of French windows, and the rich terrace landscape beyond. Ghostly repoussoir is provided by thin slivers of figures at the edges of his canvas. This reverses the traditional compositional device of repoussoir in which the figures would be central and the landscape would perform the framing.

Occasionally, articles about the nooks and crannies of narrative painting unearth stunning works. In this case, it was when looking at Folk Tales on Canvas: from Denmark to the USA.

The Russian folk tale of Ivan Tsarevich is long and complex, and quite bizarre in parts. Viktor Mikhailovich Vasnetsov’s first painting of the story shows him riding on a Flying Carpet (1880), together with the Firebird in its golden cage.

In about 1920, Ury struck gold in this Street Scene at Night, Berlin, which is thought to show Leipziger Straße. Ury had been working on different elements for some years, and here they have all just come together right. Its nighttime setting simplifies the motif, and it has lost the symmetry which had made his earlier paintings of avenues so formal.

During the year, I looked at paintings of the Greek and Roman leaders whose biographies are included in Plutarch’s Lives. Their highlight came in 17a Alexander (the Great) 2.

Gustave Moreau’s Triumph of Alexander the Great, which he painted over the period 1873-90, shows Alexander, dressed in white, sat high on his throne in the foreground. Around him is an extraordinary imagined landscape with imposing buildings forming a gorge, and a stack of grand buildings, towers, and other monumental structures further back. These are set at the foot of a massive rock pinnacle.

Moreau drew on a wide variety of sources for this most elaborate of Indian fantasy cityscapes: miniature paintings of south India, photographs by English travellers, several illustrated books, and Le Magasin Pittoresque, a contemporary illustrated magazine.

An introduction and contents to this series is here.

In the last few months, I have covered more painters who died in 1918. Among them was Koloman Moser, who worked Between Klimt, Mucha, and Hodler.

Moser’s greatest successes were not in his painting, but in design. Probably the single most remarkable piece of art which I’ve covered in the year (apart from Tintoretto’s) is Moser’s collaboration with Leopold Forstner in the design and production of windows and mosaics for the Kirche am Steinhof (also known as Otto-Wagner-Kirche) in Vienna. Most impressive among these is this window of The Physical Virtues.

Am Steinhof, as it was widely known then, is a large psychiatric and neurological hospital complex which was planned by the architect Otto Koloman Wagner (1841-1918), and built between 1904-07 in a suburb to the west of Vienna. Its architecture is Art Nouveau, and it contains several of the finest examples of that style, particularly its Roman Catholic oratory: Wikipedia has an excellent article about it here, and an extensive library of images in Wikimedia Commons.

The most untimely death of 1918 was Gustav Klimt’s young protégé Egon Schiele. I looked at his landscapes and some of his figurative work, concluding in Radical Views: Egon Schiele 5, 1917-18.

Four Trees (1917) is perhaps Schiele’s finest landscape painting, and one of the most significant of the early twentieth century.

It is sunset in the autumn. Four young chestnut trees stand in a line beside a path which meanders gently across the canvas. Their leaves have already turned completely red, and on one have almost all fallen. The rolling hills in the middle distance part to reveal far rugged mountains, and the clouds roll in parallel banks, coloured by the setting sun.

Having worked through the myths of the Metamorphoses and biographies of Plutarch’s Lives, my next narrative series looked at Torquato Tasso’s epic poem about the end of the first crusade, Jerusalem Delivered. In part eight, I looked at the section where Armida abducts Rinaldo, which has formed some of the finest narrative paintings.

The most brilliant account of Tasso’s verse is Nicolas Poussin’s justly famous Rinaldo and Armida from about 1630. Armida had intended to kill the sleeping knight Rinaldo, and her right hand still bears the dagger which she was about to thrust into him. At the last moment, though, she falls in love with him instead, and her left hand reaches out to fondle him. The Cupid is restraining her right arm in an effort to promote their love.

A summary and highlights, linked to the individual articles in the series, is here.

Late in the year, having assembled a collection of accounts of many individual Naturalist painters, I ran a parallel series looking at the life and work of The Naturalist Andersens, HA Brendekilde and LA Ring, each of whom originally had the surname Andersen.

Although both painted major works, it was Brendekilde who painted their most exceptional single painting, Worn Out, from 1889, which surely stands alongside the best of Jules Bastien-Lepage.

Most recently, I have turned to the hundred stories in Boccaccio’s Decameron as inspiration for narrative paintings. Among them is that of Cimon and Iphigenia, a tale mostly untold in paint.

Frederic, Lord Leighton’s Cymon and Iphigenia from 1884 shows Iphigenia stretched out languidly in her sleep, in the last warm light of the day; behind her the full moon is just starting to rise. Oddly, though, like every other artist, he showed a moment at the start of the story which is completely different in its continuation.

I finish this short overview with another of those surprises which just appeared when digging around, in this case for The Alhambra: 3 Landscapes 1886-1913.

Antonio Muñoz Degrain’s View of the Alhambra has intriguing foreground details, and poplars lit like white-hot pokers in the fiery light of the sunset.

I look forward to bringing you more in 2019, and tomorrow will present an overview of the year’s major anniversaries.