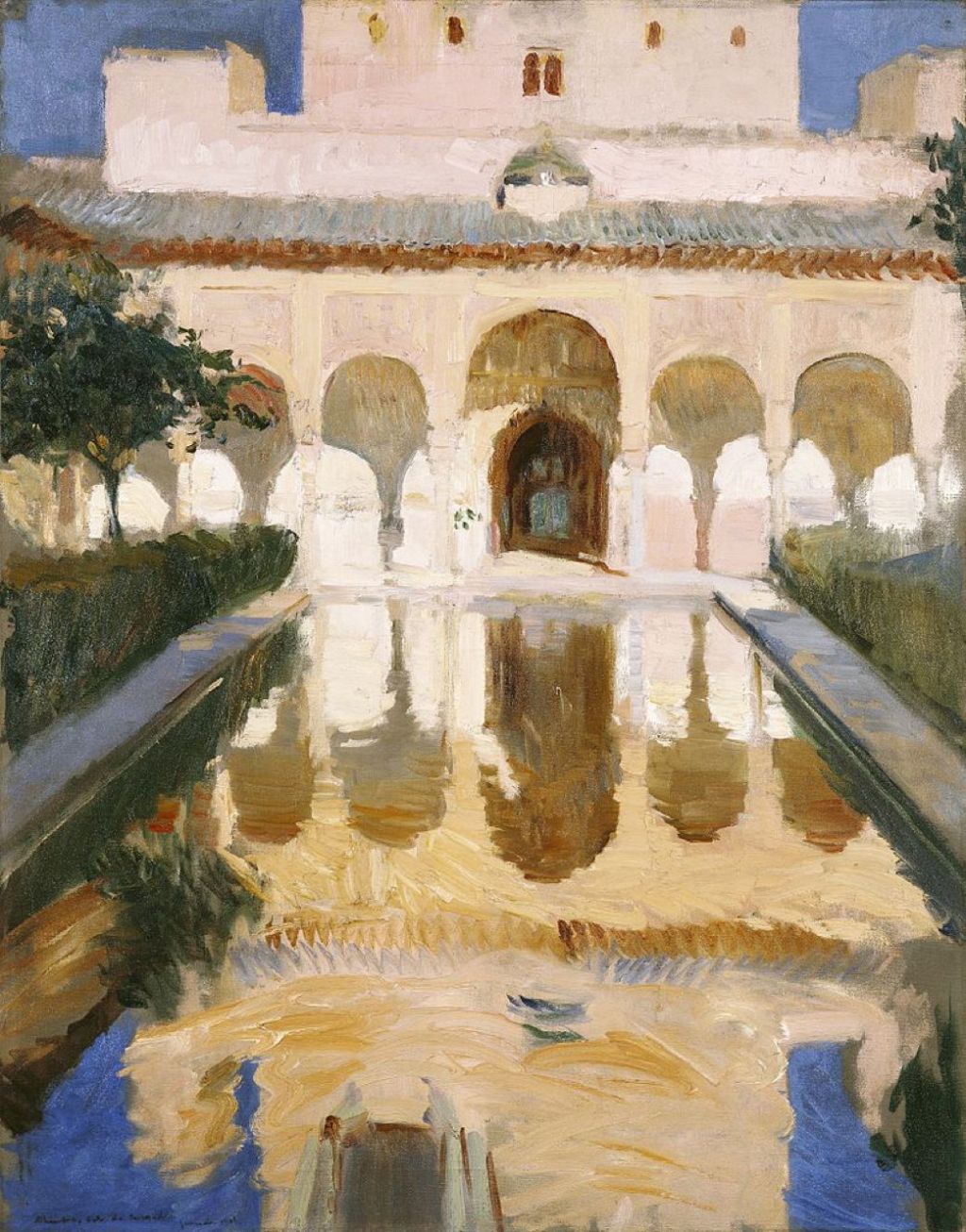 Landscape painters came to the Alhambra in the Andalucian city of Granada relatively late. But once they started to visit the Prado in Madrid to view and copy its magnificent collection of masters, a steady succession travelled south to paint the Moorish palaces of the Alhambra.

For Edmund Wodick, who must have visited Granada to paint this spectacular landscape in early 1886, it was probably the last work that he completed. Shortly after this, he developed pneumonia and died at the age of 69. He painted this just outside the city walls, looking across at the Alhambra and its towers, down towards the lush green plain and the snow-capped peaks in the far distance.

Long before the brash colours of the Fauves, those who painted the Alhambra in the rich light of dawn or dusk surprised viewers with the intensity of its colours. Henry Stanier’s view of the Alhambra from San Nicolas from 1886 is a good example, and another from late in an artist’s career. Stanier was a topographical draughtsman and sometime Orientalist from the city of Birmingham in England, whose work is now almost forgotten.

Local painter and amateur archaeologist Manuel Gómez-Moreno González was fascinated by the history of the Alhambra, and was the first to compile an account of its depictions in paintings. His own works showing the site include La Alcazaba y Torres Bermejas (The Alhambra and Castle of Torres Bermejas) from about 1887, made from an unusual viewpoint below its ridge.

The Alhambra dominates the left, with the much smaller castle to the right. The snow-clad peaks of the Sierra Nevada, which rise to over 3,000 metres (10,000 feet), look like a bank of white cloud peeking over the skyline in between.

Hernandez Miguel Vico, another local artist, also favoured a view from below in his undated painting of Alhambra and Cuesta de los Chinos. In 1877, he exhibited an interior of the Alhambra at the Salon in Paris, but I have been unable to locate an image of that.

The founder of the School of Fine Arts at Yale University, John Ferguson Weir, had studied in Europe, and his brother Julian Alden Weir was a student at the École des Beaux-Arts in Paris. Later in his career, John Ferguson Weir returned to Europe on several trips, and in about 1901 painted this fine view of The Alhambra, Granada, Spain.

As far as I can tell, Laurits Tuxen was the first Danish artist to paint a View of the Alhambra. He did so in 1902, the year after marrying his second wife. He was one of the leading members of the Skagen Painters, ‘Danish Impressionists’ if you like, and completed this en plein air on 4 May, in marvellously fine weather.

The early twentieth century brought two of the greatest artists to have painted the Alhambra: Joaquín Sorolla, who seems to have been most active in Granada in 1909, and John Singer Sargent, who visited in 1912 at least.

Sorolla came from Valencia, and is still best-known for his magnificent paintings of people and activities on the beach there. He travelled extensively during his career, but doesn’t seem to have painted in Granada until 1909, the year in which he also spent five months in the USA. These four oil sketches are a marked contrast to the more familiar finished paintings which he exhibited.

Los Picos Tower is a virtuoso oil sketch looking along the precipitous walls and towers at the edge of the site, and beyond to the dazzling white buildings of the city.

Hall of the Ambassadors, Alhambra, Granada (1909) shows this classical view with some of Sorolla’s very vigorous brushstrokes texturing the paint.

Torre de las Infantas de la Alhambra (Tower of the Children) (1909) looks past another tower towards the distant mountains, the sunlight filtering through a curtain of trees.

In Sorolla’s Albaicin, he looks down from one of the Alhambra’s towers at the bleached white buildings below.

The only available image of Sargent’s paintings of the Alhambra which I have able to find is this watercolour showing his sister Emily, also a keen artist, sketching In the Generalife (1912). Behind her is Jane de Glehn, and to the right is a Spanish friend known only as Dolores.

The unusual highlight effect seen in bushes above them, and on parts of the ground, was produced by scribbling with a colourless beeswax crayon, which resists the watercolour paint.

Théo van Rysselberghe had first visited Spain in 1881 or 82, when he too went to the Prado, and travelled on to Morocco. He visited Andalucia in company with John Singer Sargent in the Spring of 1884, but doesn’t appear to have painted the Alhambra until after his retirement to the Côte d’Azur in 1911. He then painted Fountain at the Generalife in Granada in 1913, in his late high-chroma style.

The last two paintings in my selection are both by the eclectic Valencian painter Antonio Muñoz Degrain, and show his wide range of styles. Unfortunately, neither is dated, and could have been painted at almost any time in his long career, although I suspect that both were completed after 1900.

Muñoz Degrain’s view of the Alhambra from Albaicin District is remarkable for the rhythm established by the poplar trees around its base, which become an integral part of the fortified ridge.

His View of the Alhambra is one of my favourite paintings of this motif, for its intriguing foreground details, and the poplars lit as white-hot pokers in the fiery light of the sunset.

What better way to end our long weekend away from the chill and gloom of winter.