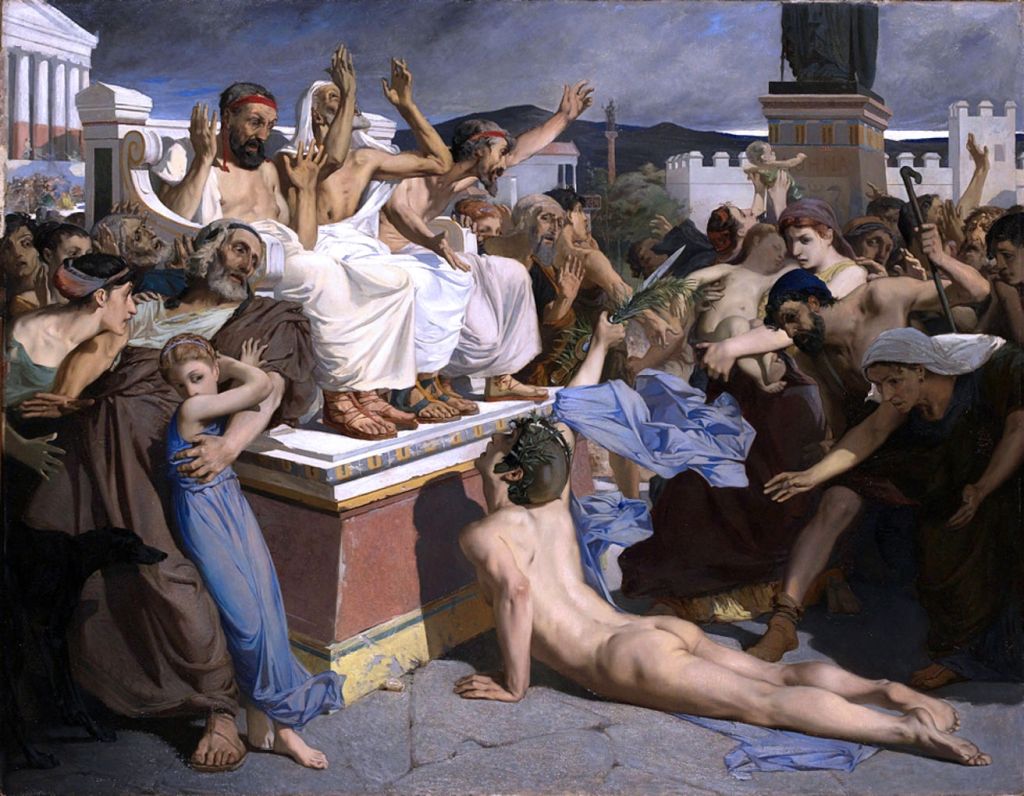 Over the last six months, I have been summarising some of the biographies in Plutarch’s Lives (or Parallel Lives, if you prefer) and showing some of the great paintings which have been made in response. In this and next week’s articles to close this series, I include excerpts which tell some of the more memorable stories, with the very best of the paintings. I hope that you enjoy this small selection.

Theseus was a swashbuckling hero who went through life with the aid of a series of murders and more than a couple of rapes too. He became a close friend of Peirithoüs, and when the latter married Deidameia, he invited Theseus to the wedding in the country of the Lapiths.

Unfortunately, Peirithoüs also invited some centaurs to the feast, and when they had too much to drink, they started to carry off Lapith women that they fancied. The Lapiths killed many of the centaurs on the spot; others died in the subsequent war between the Lapiths and centaurs. Theseus fought alongside the Lapiths both at the wedding and afterwards.

Peter Paul Rubens’ The Rape of Hippodame (Lapiths and Centaurs) (1636-38) shows an early part of the action at the wedding. At the right, Eurytus the centaur is trying to carry off Hippodame (Deidameia), the bride, with Theseus just about to rescue her from the centaur’s back. At the left, Lapiths are attacking with their weapons, and behind them another centaur is trying to abduct a Lapith woman.

Theseus’ bravery was marred by wholly unacceptable acts, though. When he was fifty, he became involved in the abduction and rape of Helen, the daughter of King Tyndareüs, and later best-known as Helen of Troy. She “was not of marriageable age” at the time.

Romulus and Remus the founders of Rome

The former King Numitor’s daughter, a Vestal Virgin, was discovered to be pregnant. Although this traditionally would have led to her death, Amulius’ daughter interceded, and she was merely kept in solitary confinement. She gave birth to twin boys, who were superhuman in their size and beauty. Amulius ordered one of his servants to take the twins away and drown them in the river, but they were put first into a trough which served them as a boat. As a result they were washed ashore downstream still alive.

A she-wolf then fed the babies, and a woodpecker watched over them; both were later considered to be sacred to the god Mars.

Peter Paul Rubens shows Romulus and Remus being discovered by the shepherd Faustulus in his painting of 1615-16. Not only is the she-wolf taking care of the twins, but a family of woodpeckers are bringing worms and grubs to feed them, and there are empty shells and a small crab on the little beach as additional tasty tidbits. Rubens also provides a river god and water nymph as guardians.

After killing his brother, Romulus went on to build the city of Rome, and to lead it in its early years. Desperately short of women, Romulus engaged in subterfuge and force to abduct wives and daughters from the neighbouring Sabine tribe. Their remaining men threatened war against Rome in retaliation, and to take back those abducted women.

The Sabine king and general Tatius then led them against Rome. Their task wasn’t easy, as in those days its citadel was on the Capitol hill, a strongpoint for defence. The captain of the guard there had a daughter named Tarpeia. In return for the golden armlets which Sabine warriors wore on the left arm, Tarpeia betrayed the city of Rome by leaving its gates open at night, allowing the Sabines to enter.

As the Sabines swarmed in, Tatius told them to leave what they carried on their left arm with Tarpeia. As they also carried their shields, many misunderstood the command, and Tarpeia was buried under so many shields and golden armlets that she was crushed to death. She was buried where she fell, the spot becoming known as the Tarpeian Rock. It was the place from which traitors and other enemies of Rome were thrown to their death.

With the Sabines in possession of the Capitol, Romulus challenged them to fight. There followed a series of indecisive battles, until Romulus was struck on the head by a rock, and his troops started to retreat to the Palatine hill. He had just regained order and commanded his forces to stand and fight, when the abducted Sabine women invaded the battlefield.

That is the remarkable scene depicted in Jacques-Louis David’s The Intervention of the Sabine Women (1799), which is sometimes mistakenly assumed to show an event immediately following their abduction.

Looming over the city is the rugged Tarpeian Rock, where the traitorous Tarpeia had just been buried. Highlighted in her brilliant white robes in the foreground, and separating two of the warriors, is the daughter of Tatius, Hersilia, whom Romulus had married. The warriors are, of course, her father and her husband, and the infants strategically placed by a nurse between the men are the children of Romulus.

Publicola, the rape of Lucretia, and the birth of the Republic

The last King of Rome, Tarquinius Superbus, had been tyrannical. Matters came to a head when his son, Sextus Tarquinius, raped a noblewoman, Lucretia. Although Plutarch does not tell this story, he refers to it leading into Publicola’s involvement in the subsequent revolution.

Many masters painted Lucretia’s suicide, most notably Rembrandt, whose later painting of 1666 is one of the most moving images in the canon of Western art. Lucretia has already pierced her chest with her blade. Her fine clothing has been pulled back to reveal her simple white shift, which has a broad streak of fresh, bright red blood running down from the point at which the dagger was inserted.

Her arms are outstretched: her right hand still clutches the dagger, which has dropped to waist level already. Her left hand is dragging a beaded bell-pull, presumably to summon her family to witness her final moments on earth. It is her face, though, which makes this painting. Her eyes, moistened by welling tears, are looking away to the right of the painting, in an absent-minded stare. Her brow is tensed with subtle anxiety. She knows that she is about to die, and is preparing herself for that moment.

Lucius Brutus and Publicola were among the leaders who drove out and overthrew the king, and with popular support instituted a republic under two consuls. However, Publicola’s hopes of being elected to the office were dashed when Lucretia’s husband, Tarquinius Collatinus, was chosen instead.

Aristides and the Battle of Marathon

Aristides first made his reputation as a general at the Battle of Marathon (in 490 BCE), in which the Athenians defeated King Darius the First’s Persian army even though the Greeks had less than half the number of men. The commander there was Miltiades, but it was the forces under the immediate command of Themistocles and Aristides who saw the most and hardest action.

According to the account of Herodotus, there were two singular athletic achievements associated with the Battle of Marathon: in one, an Athenian named Pheidippides ran more than 225 km (140 miles) from Athens to Sparta to ask for assistance before the battle started. In the other, the Athenian forces marched at great speed from the battlefield back to Athens, a distance of 40 kilometres (25 miles), to counter a Persian force which was travelling by sea to the city.

Plutarch is one source who conflates these, and elsewhere claimed that a runner named Erchius or Eucles ran from Marathon to Athens to announce the Greek victory. As shown in Luc-Olivier Merson’s painting of The Soldier of Marathon (1869), on telling of victory, the athlete – now named Pheidippides or Philippides – collapsed and died.

Merson’s painting won him the Prix de Rome, and became a significant part of the growing Olympic movement, which culminated in the running of the first modern Marathon in the renewed games of 1896.

Aristides was made Archon, ruler over Athens, in return for his accomplishments at Marathon, and quickly became known as the Just, on account of his passion for justice. Inevitably, this gave rise to jealousy, and Themistocles claimed that Aristides had abolished the courts of law, and was judging cases in private instead. This led to Aristides being ostracised, and banished from Athens for ten years.

Titus was the Roman who was responsible for negotiating peace with Philip of Macedonia, but the latter refused to withdraw his garrisons from Greek cities. Even when the Romans had won over the support of much of the rest of Greece, Philip remained obdurate, and tried to negotiate a better deal by sending ambassadors direct to Rome. Titus was supported by the senate, who agreed that he should continue his campaign against the Macedonians. Their large armies, of over 26,000 each, engaged near Scotussa.

The Romans got the upper hand in the battle, killing eight thousand Macedonians and taking five thousand prisoners, but Philip himself managed to escape. Eventually, Titus achieved peace by returning the kingdom of Macedon to Philip, but requiring him to keep away from Greece. The senate provided Titus with ten commissioners, who were to supervise the freedom of Greece, with three Roman garrisons.

At the Isthmian games, Titus was formally proclaimed proconsular general, and Greece made free within Roman supervision. This slowly brought a huge roar of approval from the spectators.

Giuseppe Sciuti’s Titus Quinctius Offers Liberty to the Greeks from 1879 is a grand and brilliant depiction of this milestone in the history of Greece as a nation.

Caius Marius had just served in Spain, where his hard work and simple life won him popular support, and he then married Julia, Julius Caesar’s aunt. He went on to Africa as legate, where his fame grew considerably, but he made an enemy in Metellus. Marius returned to Rome, where he was elected consul. In that high post he proved unpopular because of his bold and arrogant speeches against the patricians, and he became enemies with Sulla, as both men wanting the glory for the successful outcome of their campaign in Africa.

As Rome came under threat from the Teutones and Cimbri, Marius was again made consul. He returned from Africa to celebrate his triumph, and to prepare to lead the army against the Cimbri.

Tiepolo’s painting of The Triumph of Marius from 1729 shows the general in a chariot drawn not by four but three horses, with the defeated and captured barbarian leader Jugurtha in front wearing chains.