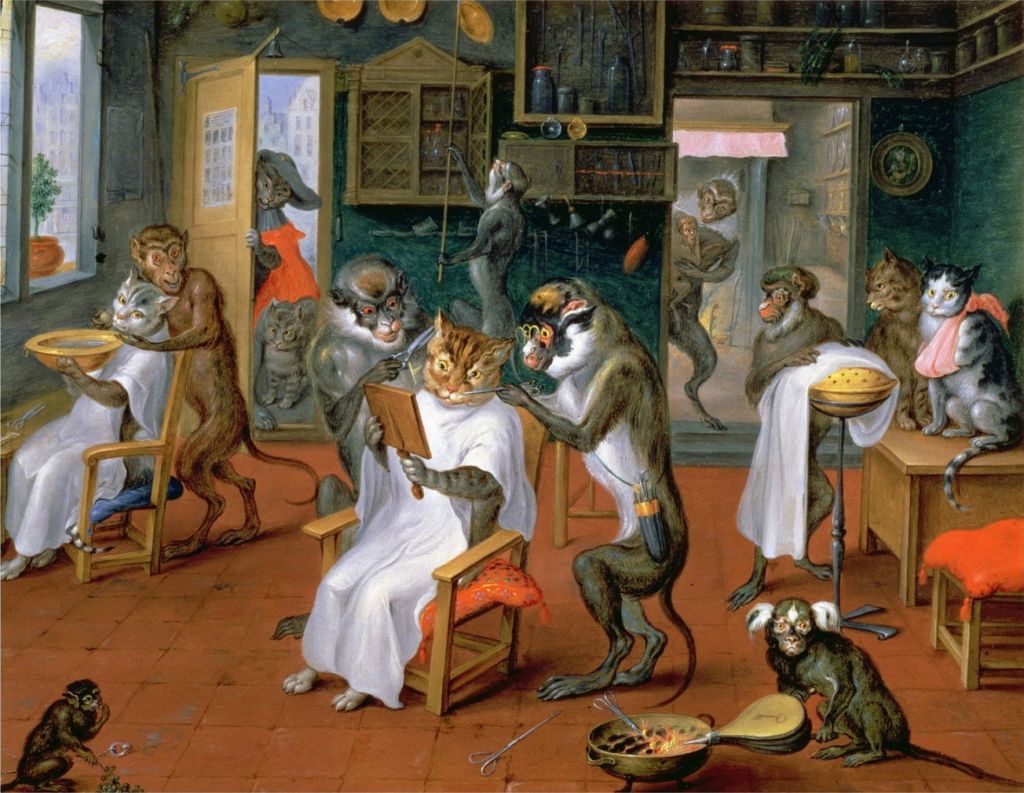 Monkeys, or apes, are one of the oldest motifs in European painting, and have been significant features in every century’s art since the 1400s. Until little more than a century ago, though, monkeys were only human-like, and not our nearest relatives.

In this article and its sequel, I look at some of the best and most interesting paintings in which monkeys are major participants. These include a rich variety of genres and themes, including singeries, the rather odd and amusing works in which monkeys substitute for humans in everyday events – a device used more recently in advertising.

The earliest known example of monkeys in European art is this lavish fresco of Blue Monkeys found in the ruins of Thera, on the modern island of Santorini in Greece. This Cycladic civilisation was destroyed by a massive volcanic explosion in about 1627 BCE, so we know that these paintings are well over 3,500 years old.

Although now known as the fresco of the Blue Monkeys, these images make them look rather grey, and that may have been their intended colour. Presumably these monkeys had been introduced from North Africa.

The ruins on Santorini were not excavated until very recently, and these blue monkeys were concealed for the period from 1627 BCE until the late 1960s. Despite that, the next notable appearance of monkeys in European art shows animals which are almost eerily similar.

The reverse of Botticelli’s painting of Judith with the Head of Holofernes bears an unfinished work from about 1470 which has been given the title of Deer and Monkeys. Where the artist had seen these pale blue monkeys isn’t clear, although the background landscape shows a coastline on the Mediterranean.

The following century, members of the prolific Brueg(h)el family were among the artists from northern Europe who made monkeys major figures in their art. This is Pieter Brueghel the Elder’s later painting of Two Chained Monkeys from 1562. This pair of monkeys was kept at one of the major ports on the North Sea coast, where they had presumably been brought from North Africa, or even further afield.

Monkeys started to appear as novelties in many paintings, including portraits of the rich, who often kept them as exclusive pets.

At the end of that century, Cornelis van Haarlem’s wonderful painting of The Fall of Man (1592) counts a monkey in with the many different species it shows in the Garden of Eden. These include familiar species such as dog, fox, sheep, cat, frog, and snail.

Between the legs of Adam and Eve is a touching passage of a small monkey embracing a cat. There are obvious relationships between the monkey and Adam, and between the cat and Eve, but van Haarlem may also have been invoking the fable of the cat’s paw, which I will examine in the next article in the context of Landseer’s more explicit depiction.

Painters have long been attracted to the spectacle of humans who look different. In Agostino Carracci’s case, he combined three strange examples in his Hairy Harry, Mad Peter and Tiny Amon, completed between 1598-1600, not long before his death.

From the left are Tiny Amon (Rodomonte) the dwarf, Arrigo Gonzalez the hirsute (Hairy Harry) from the Canary Islands, and Mad Peter (Pietro the buffoon). Accompanying them are a large parrot, a couple of dogs, and two monkeys.

Monkeys were also relatively common in Vanitas paintings, such as Clara Peeters’ Fruit, Dead Birds and a Monkey (1615-20). A monkey is busy feeding from nuts, while gazing at a small pile of dead birds. I’m not sure how monkeys fit in with the symbolic associations with death in Vanitas compositions, though.

The early 1600s saw the first outbreak of a new sub-genre, that of the singerie – the French for monkeying, as in monkeying about. In these, monkeys dressed up as humans assume the role of humans in an everyday activity. Among the artists who painted singeries were those of the Teniers family.

David Teniers the Younger’s A Monkey Encampment from 1633 shows monkeys in human roles in a camp. They sit talking outside a large tent, staff a stall, and in the background are arriving at a military meeting, presumably involved in the recruitment of the population into its army or militia.

By about 1650, Abraham Teniers developed this into his comic undated Barbershop with Monkeys and Cats. Two cats are sat in the chairs in a barbers, and their attendants are monkeys. The barbershop shown is traditional in that it not only caters for the cutting of hair, but also has facilities and instruments for minor surgery, hence the use of hot coals in cleaning the surgical instruments.

When Holland grew rich in the Golden Age, much of those profits were gambled on tulip flowers, during what became known as Tulipmania or Tulipomania. Bulbs of varieties which were in demand fetched extremely prices, which speculation drove into a bubble. When reality returned to the market, prices crashed and fortunes were lost.

Jan Brueghel the Younger’s Allegory of Tulipmania from about 1645 shows tulip trading during its height, with each figure a monkey dressed in human clothing.

My last painting from the period before the Age of Enlightenment is Antoine Watteau’s tondo of The Monkey Sculptor from about 1710. This is a fairly straightforward case of singerie, this time set in the sculptor’s studio.