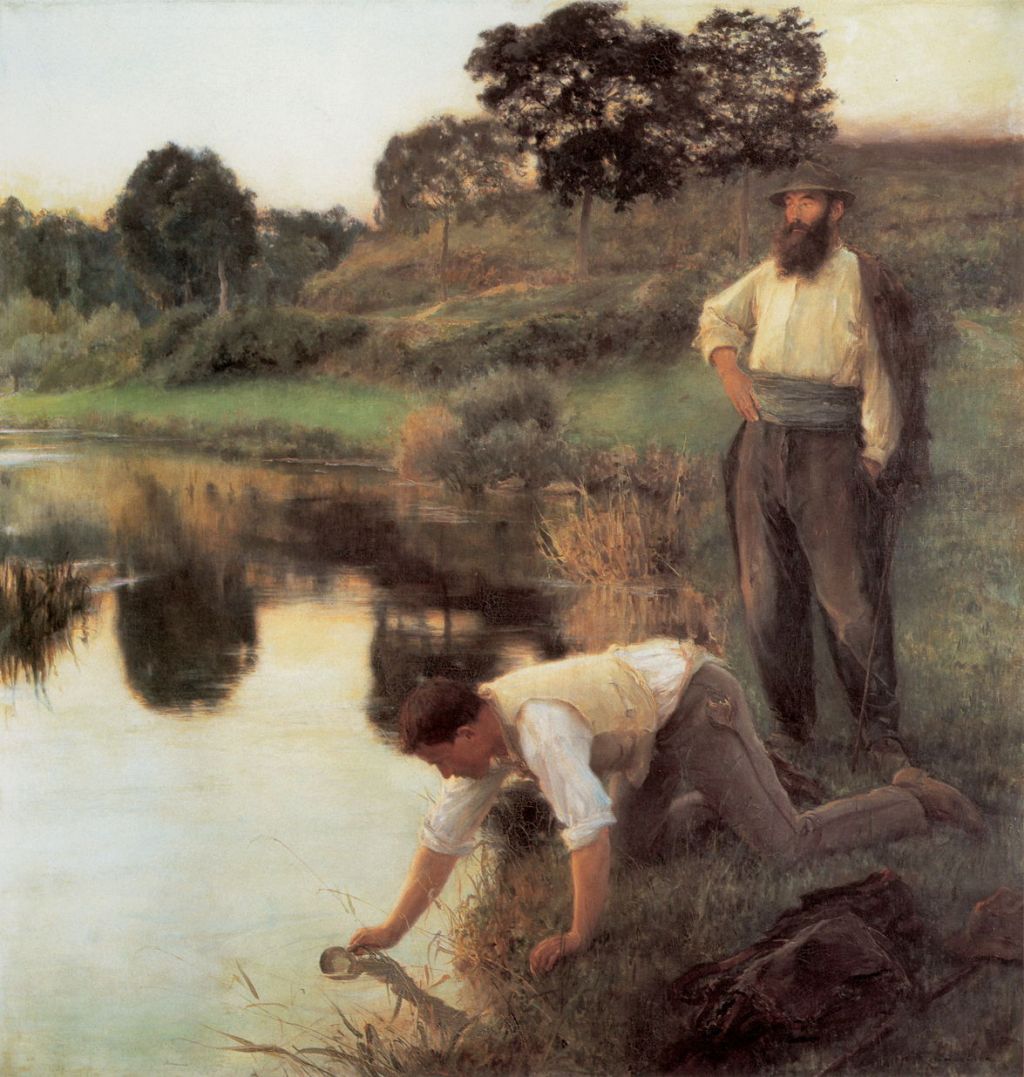 We seem to have forgotten and lost most of a generation of fine painters from the late nineteenth century. This week, I have beem looking for information about, and images of the work of, the once-great Jules-Alexis Muenier (1863–1942), many of whose paintings were bought straight from the Salon to go into the Musée du Luxembourg, then the centre for modern art.

Muenier was also unusual for his use of photography in his painting. Many artists of the late nineteenth century took photographs, and some, like Degas, were innovative in both. But most were quite secretive about their photography, fearful of its threat to their livelihood, and openly secptical about its potential as an art. Those who used their photography in painting usually kept very quiet about that. But not Muenier.

This article presents an overview of his career and work, and in the second article I will look more closely at how he might have used photography in his painting.

Jules-Alexis Muenier was born in the town of Vesoul, near Lyon, in the east of France – which also happens to be the home town of Jean-Léon Gérôme, who was later one of Muenier’s teachers, and Pascal Dagnan-Bouveret, his great friend who was about ten years older than him. Muenier’s father was a writer and journalist, and encouraged his son to develop his drawing and painting skills when they became apparent as a child.

In 1880 or 1881, Muenier started his studies at the École des Beaux-Arts in Paris, where he worked in Gérôme’s studio, and developed his friendship with Dagnan-Bouveret. When he had completed his training in 1885, he moved out of Paris to live in Coulevon, close to his home town, where he married and settled down to live on an estate which had been bought from Gérôme by Muenier’s in-laws, and to paint in the beautiful countryside of the Haute-Saône.

His first success at the Salon was in 1887, when his painting The Breviary won him a medal there, despite Gérôme’s reservations about the work. I will discuss that painting in the next article.

In 1888, Muenier travelled across Spain, to visit North Africa with Pascal Dagnan-Bouveret and their camera equipment. Following this, and using the photographs together with sketches, Muenier painted several Orientalist works, but I have been unable to locate suitable images of them.

Beautiful Days (1889) was successfully exhibited at the Salon the following year, where critics compared him to the still highly popular Jules Bastien-Lepage, who had died in 1884. It shows three generations of a family together in the garden of their home: an image which was strongly supportive of the ideals of the Third Republic.

At first sight, you might assume that the mother was Muenier’s wife, and the rest were members of his family. Muenier actually experimented with several different models, photographing them and adjusting with his composition likewise. The figures shown are the artist’s wife and son Pierre, the Mayor of Coulevon, and an unidentified older woman, and they are sat in the garden of Madame Muenier’s parents’ estate in Coulevon.

Catechism Class (1890) was exhibited at the Salon of 1891, where it was bought for the Nation, and the first of Muenier’s paintings to be hung in the Musée du Luxembourg. It is now in the Musée d’Orsay, Paris. An elderly country priest sits looking intently at the four village children whom he is teaching in preparation for their confirmation, which will be their next major milestone in life.

The children could have come straight from Bastien-Lepage’s paintings of country children. They are poor, their clothing ragged and faded, but Muenier compares them with the wild flowers around them.

Later in his career, Muenier lived in Corsica for two years, where he painted extensively, and in Switzerland, where his son Pierre was a Professor of French Literature and author.

I suspect that Muenier may have painted Le Calme (Serenity) (1894) when he was in Corsica, and that the trees shown are Corsican pines. This young woman is walking down a clifftop path with her basket of lemons, and pauses to look out to sea. She is above a small bay, in which there is a fishing boat. The horizon is hazy with the Mediterranean heat.

Les Chemineaux (Tramps) from about 1897 was a success when it was exhibited at the Salon that year, from where it was purchased for the Musée du Luxembourg. Muenier used photographs of his models in developing this painting, which shows two tramps or vagrants who have stopped by a slow-flowing river to drink. Their clothing looks surprisingly clean, and they seem well-shod too.

This painting, as with others by Muenier, follows Bastien-Lepage‘s formula of fine detail in the foreground, far less detail in the background, and a high skyline.

Muenier experimented with his style around the turn of the century: The Children’s Round (1902) was exhibited at the Salon that year, although it looks more illustrative.

Elegant Repose from 1932 is one of his later paintings, whose fashionably-dressed young woman is very much dolce far niente – doing sweet nothing. I don’t know whether this represents a more aesthetic approach in his later life, though.

I have a further three paintings by Muenier which are undated.

From the Garden is a wonderful painting of a small girl trying to bring into the house a bunch of freshly-cut flowers which are as large as she is. It reminds me of the paintings of Harriet Backer.

Angler by the Stream is a pastoral view at the edge of a village, showing a fisherman working the river close to a small wooden bridge. A woman, his wife possibly, is crossing the bridge and appears to have stopped to talk to him from there. Behind her are two magnificently pollarded trees.

Judging by its brilliant greens, The Rustic Rendezvous is set in Spring, as a young couple talk together. She is taking a large pitcher probably to a well, and looks down on him, as he stands on the other side of a stone wall, further down the hillside. This was a popular theme among Naturalists.

Muenier painted almost to the day of his death, and between 1887 and 1941 exhibited more than three hundred paintings in the Salons in Paris. He died in Coulevon, where he had lived and worked for most of his life, in 1942, at the age of 79.

In the next article, I will look at the evidence as to how he used photography in his painting.