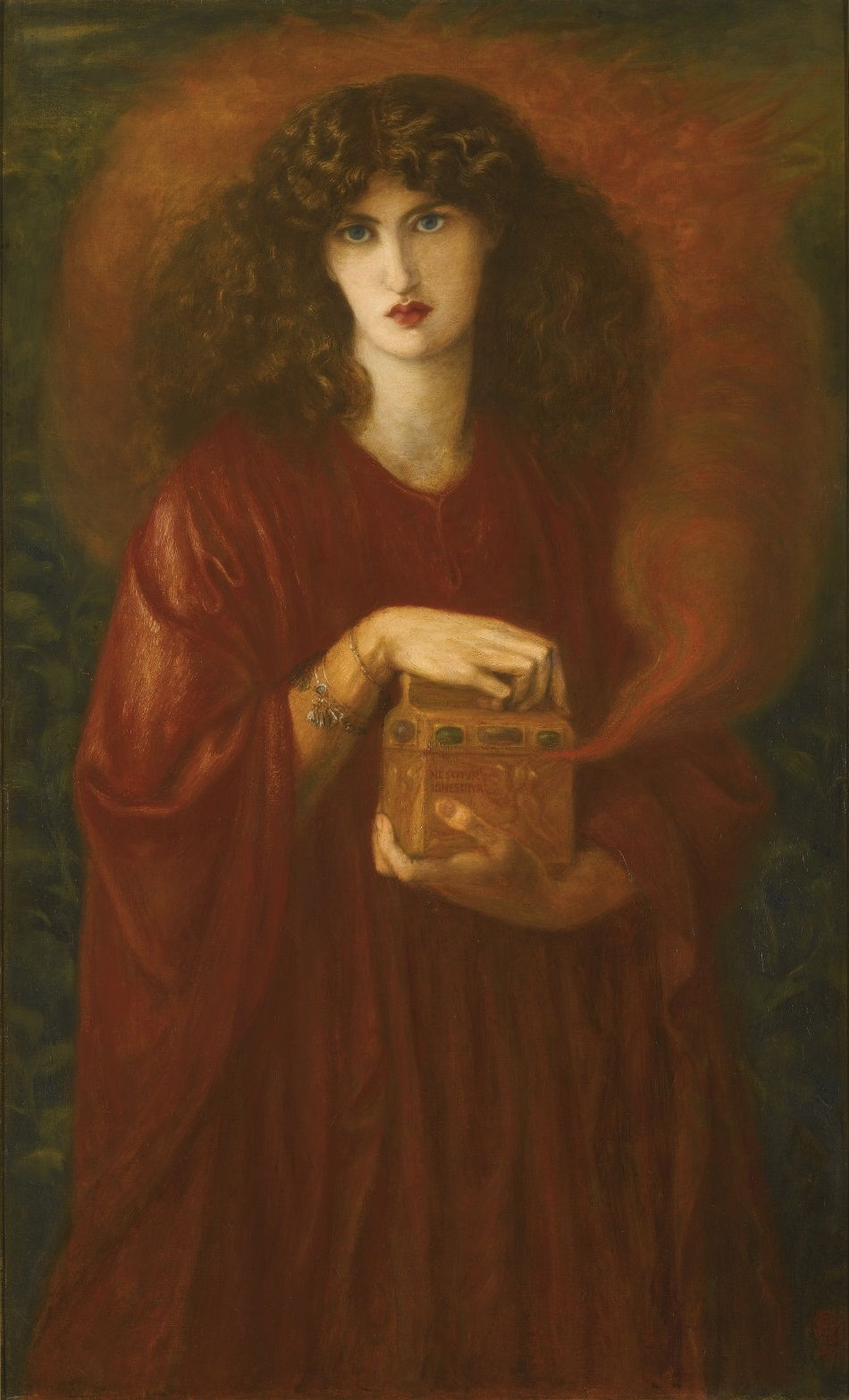 Most classical myths were told in paintings during the sixteenth and seventeenth centuries, with narrative masters such as Rubens often painting them two or more times. Very few remained almost undiscovered and untold until the nineteenth century.

The story of Pandora and her ‘box’ is one such myth which was almost unknown in painting until 1850, when it suddenly became very popular. This article and the next look at most of the surviving paintings telling this tale.

One reason for Pandora’s late discovery is that her myths appear in less popular sources: Hesiod’s Theogony and Works and Days. These are among the oldest of the Greek anthologies of myth, dating back to around 750 BCE, even now are not as accessible as Ovid’s Metamorphoses, and deal with more ‘difficult’ stories.

The story of Pandora and her ‘box’ is told most fully in Works and Days, where she is the original woman, created by Hephaestus (Roman: Vulcan) for Zeus, as punishment for humans receiving the gift of fire which had been stolen by Prometheus. After she was formed from earth by Hephaestus, other gods gave her properties which determined her nature.

Athena dressed her in a silvery gown, and taught her needlecraft and weaving. Aphrodite shed grace on her head, together with cruel longing and cares. Hermes gave her a shameful mind and deceitful nature, together with the power of speech, including the ability to tell lies. Other gifts were provided by Persuasion, the Charities, and the Horae.

Pandora also carried with her a large earthenware jar (pithos, in Greek) containing toil and sickness that bring death to men, diseases, and a myriad of other pains. Zeus gave her as a gift to Epimetheus, brother of Prometheus. She then opened her jar, and released its evils into the earth and sea. The only thing remaining in the jar was Hope, who stayed under its lip.

This marked the beginning of the second age of mankind, its Silver Age, in which people knew birth and death, as humans had become subject to death, and Pandora brought birth too. In later accounts, Epimetheus married Pandora, and the couple had a daughter Pyrrha, who married Deucalion with whom she survived the flood.

As with other classical myths, at the time that Jean Cousin painted Eva Prima Pandora, in about 1550, it had been mixed with Christian religious narrative, in this case of Eve and the Fall of Mankind. No longer clothed in Athena’s silvery gown, Eve/Pandora lies naked, propped against a human skull. Her left hand clutches the dreaded jar, which she has not yet opened.

Her right hand holds a fruiting sprig of the apple tree, an allusion to the traditional Biblical story of Eve. Coiled around her left arm is a serpent, another reference to the Fall of Mankind.

When William Etty painted her, in Pandora Crowned by the Seasons of 1824, the significance of the crux of the story, Pandora opening the jar, had become lost in the other detail. Besides, it gave Etty the opportunity to paint a statuesque and almost naked young woman.

It was the now-forgotten Henry Howard who first painted The Opening of Pandora’s Vase in 1834. Pandora, more correctly dressed, crouches to duck the torrent of woe, evil and pain which streams from the jar, as Epimetheus tries in vain to reseal its lid. This is the story as told by Hesiod in his Works and Days.

At some time between about 1834 and 1860, the story of Pandora with her jar of evils became confounded with that of Psyche, who had a box which she could not open. The result was the tale still told about Pandora and her box of evils.

This undated painting attributed to Louis Hersent of Pandora Reclining in a Wooded Landscape gives this revised account, with the box firmly shut in Pandora’s right hand, and the motif an uncommitted combination of landscape, nude figure, and weak narrative.

In the 1870s, this suddenly became one of the most popular subjects for mythological paintings. This doesn’t appear to have been the result of it being told in another creative medium, though.

Dante Gabriel Rossetti’s first painting of Pandora, completed in 1871, shows a moody, brooding Pandora, modelled by Jane Morris. She has just cracked open the lid of the jewelled casket held in her left hand, and it emits a stream of noxious red smoke. As this coils around her head winged figures appear in the fumes.

This was one of Rossetti’s earlier paintings of Jane Morris, the wife of his friend William Morris, and the subject of Rossetti’s late passionate obsession. It was commissioned by John Graham for 750 guineas, who was so pleased with the result that he exhibited it, against Rossetti’s wishes, in Glasgow the following year. Graham had made his money in cotton manufacture and trade with India, and was a keen collector of Pre-Raphaelite art.

Rossetti’s source for the story of Pandora was most probably Lemprière’s dictionary of classical mythology, which erroneously referred to Pandora’s box, not jar. The inscription on the side of the jewel casket reads “Nascitur ignescitur”, meaning born of flames.

Jules Lefebvre was another artist who painted Pandora more than once. This initial version from 1872 shows her walking with the fateful box held in both hands, its lid firmly shut. Ominous smoke rises from a series of fumaroles in the ground around her. She is nude, wears an unusual coronet, and there is a six-pointed star above her head.

Next was Alexandre Cabanel’s portrait of the Swedish soprano Christine Nilsson as Pandora, from 1873. As a portrait rather than a faithful account of the myth, the box is closed, almost concealed, and its significance suppressed.

In 1877, the elderly Paul Césaire Gariot’s Pandora’s Box places her in a primeval world of rock, studying the closed box intently, wrestling internally with the desire to open it.

The following year, Dante Gabriel Rossetti make a chalk study for a second painting of Pandora, again using Jane Morris as his model. Her face shows a faint agony this time, as a decorative golden stream emerges from the crack in the lid. Here the inscription reads “Ultima manet spes” – hope remains last, a candidate perhaps for Rossetti’s own epitaph.

Wikipedia on the myth of Pandora.