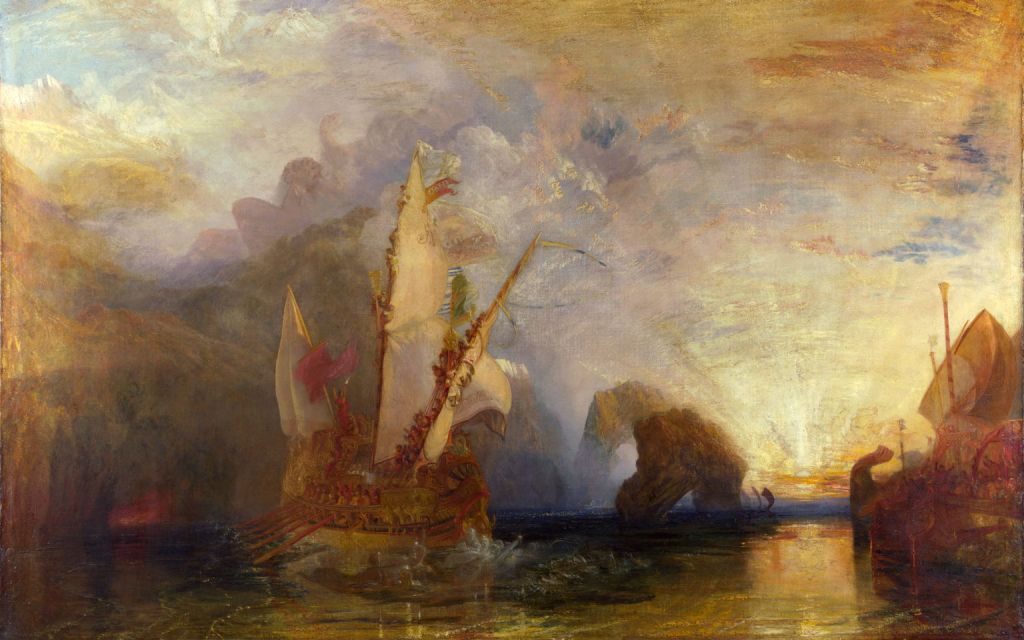 This is the second of two articles summarising the very best stories and finest paintings from the second half of Ovid’s Metamorphoses. The first, covering Nessus, Deianira and Hercules through to the Greeks attacking Troy, is here.

The Lapiths and the Centaurs (Book 12)

When Pirithous married Hippodame, the couple invited centaurs to the feast. Unfortunately, passions of the centaur Eurytus became inflamed by drink and lust for the bride, and he carried off Hippodame by her hair. The other centaurs followed suit by each seizing a woman of their choice, turning the wedding feast into utter chaos, like a city being sacked.

Theseus castigated Eurytus and rescued the bride, so the centaur attacked him. Theseus responded by throwing a huge wine krater at his attacker, killing him. The centaurs then started throwing goblets and crockery, and the battle escalated from there.

Nestor, as the narrator of this story, gives a succession of grisly accounts of Lapiths and Centaurs killed. Gryneus the centaur ripped up the altar and crushed two Lapiths with its weight, only to have his eyballs gouged out by a Lapith using some antlers. Not content with using the objects around them as weapons, they started using their own lances and swords.

When the centaur Petraeus was trying to uproot a whole oak tree, Pirithous, the groom, pinned the centaur to the tree-trunk with his lance. Nestor tells of the centaur couple, Cyllarus and Hylonome: Cyllarus was struck by a javelin at the base of his neck, and died in Hylonome’s arms from his wound.

Nestor also tells of the success of Caeneus, formerly Caenis, in killing five centaurs. The centaur Latreus taunted Caeneus, so the latter wounded the centaur with his spear. Latreus thrust his lance in Caeneus’ face, but was unable to hurt him, so he tried with his sword, which broke against the invulnerable Caeneus, leaving him to finish the centaur off with thrusts of his own sword.

The centaurs then united to try to overwhelm Caeneus by crushing him under their combined weight, but Caeneus was transformed into a bird with golden wings. The survivors finally dispersed, and the Lapiths had won the day.

Towards the end of his life, in about 1637-38, Peter Paul Rubens painted a brilliant oil sketch which was turned into this finished painting, The Rape of Hippodame (Lapiths and Centaurs) (1636-38). At the right, Eurytus is trying to carry off Hippodame, the bride, with Theseus just about to rescue her from the centaur’s back. At the left, Lapiths are attacking with their weapons, and behind them another centaur is trying to abduct a woman.

When Aeneas landed on Sicily, he found Scylla combing the hair of Galatea, as the latter lamented her tragic love-life. Wiping tears from her eyes, Galatea told her story.

When he was only sixteen, Galatea had fallen in love with Acis, the son of the river nymph Symaethis, but the Cyclops Polyphemus fell in love with her. The latter did his best to smarten his appearance for her, though he remained deeply and murderously jealous of Acis.

Telemus, a seer, visited Sicily and warned Polphemus that Ulysses would blind his single eye. This inevitably upset the Cyclops, who climbed a coastal hill and sat there, playing his reed pipes. Meanwhile, Galatea was lying in the arms of her lover Acis, hidden behind a rock on the beach.

Polyphemus then launched into a long soliloquy imploring Galatea to come to him and spurn Acis. When he spied the two lovers together, Polyphemus grew angry, and shouted loudly at them that that would be their last embrace. Galatea dived into the sea, but the fleeing Acis couldn’t escape so easily. Polyphemus flung a huge rock which he had torn from the mountain at the young man, burying him completely.

With the purple blood of Acis flowing from under the rock, the latter was split into two, and Acis transformed into a river-god, ending Galatea’s sorrowful tale.

Pompeo Batoni’s Acis and Galatea from 1761 shows the Cyclops, his reed pipes at his feet, hurling the boulder at Acis, making clear his tragic fate. From behind the legs of her lover, Galatea looks up at Polyphemus in fear.

Heading north-west from the Straits of Messina, Aeneas and his crew encountered a fierce northerly storm which blew them south to the city of Carthage, on the Libyan coast. Ovid summarises the disastrous love affair between Aeneas and Queen Dido of Carthage – which fills a whole book of Virgil’s Aeneid – in a few pithy lines:
And then Sidonian Dido, who was doomed
not calmly to endure the loss of her
loved Phrygian husband, graciously received
Aeneas to her home and her regard:
and on a pyre, erected with pretense
of holy rites, she fell upon the sword.
Deceived herself, she there deceived them all.

My favourite painting of Dido’s spectacular death is probably the only conventional history painting ever made by Henry Fuseli, and is known simply as Dido (1781). Dido has just been abandoned by Aeneas, has mounted her funeral pyre, and is on the couch on which she and Aeneas made love. She then falls on the sword which Aeneas had given her, and that rests covered with her blood beside her, its tip pointing up towards her right breast.

Her sister Anna rushes in to embrace her during her dying moments, and Jupiter sends Iris (shown above, wielding a golden sickle) to release Dido’s spirit from her body. Already smoke seems to be rising up from the pyre, which confirms visually to Aeneas that she has killed herself, as he sails away from Carthage.

The Wrath of Polyphemus (Book 14)

When Ulysses arrived on Sicily, Polyphemus held him and his crew captive, then devoured several of them, so Ulysses got the Cyclops drunk in order to engineer their escape. Polyphemus asked Ulysses his name, and the latter replied Οὖτις (Outis, Greek for nobody). Once the giant had fallen into a stupor, Ulysses drove a hardened stake into the Cyclops’ one eye, blinding him.

The following morning, Ulysses and his men tied themselves to the undersides of the sheep in Polyphemus’ flock so that he couldn’t feel them escaping. Recognising that he has lost his captives, Polyphemus called out for help from the other Cyclops, telling them that ‘Nobody’ had hurt him. The other Cyclops therefore didn’t come to his aid.

Ulysses and his men made their way back to their ship and sailed off into the dawn, deriding the blind Polyphemus as they went. Polyphemus flew into a rage, and hurled huge rocks at Ulysses in his ship.

JMW Turner’s magnificent Ulysses Deriding Polyphemus is probably his finest narrative painting, and the product of a long gestation. He seems to have started work on rough sketches for this in a sketchbook which is believed to date to 1807, and this finished painting was exhibited at the Royal Academy over twenty years later, in 1829.

The massive figure of Polyphemus is wreathed in cloud above the wooded coast towards the upper left, as the rays of the rising sun light the whole scene from Apollo’s chariot.

The entire crew is dressing the masts and rigging, and Ulysses brandishes two large flags, to deride the blinded giant. The orange flag on the mainmast bears the Greek letters Οὖτις (Outis), the name that Ulysses told Polyphemus was his. Below it is another flag showing the wooden horse of Troy, a reference to Virgil’s Aeneid. In front of the bows of the ship are ghostly white Nereids and sea creatures, presumably a reference to Neptune, Polyphemus’ father, whose curse results from this incident.

Pomona was a devoted and very capable gardener, who cared for her plants with passion. However, she shunned male company, and had no interest at all in the many men who sought her love. One, Vertumnus, the god of seasons, gardens, and plant growth, loved Pomona more than any other, but had no success in attracting her.

Vertumnus was able to shape-shift at will, and in his quest for Pomona’s love he had posed as a reaper, a hedger, and in various other gardening roles. Through these, he had been able to gain entry into her garden, but had made no progress in winning her hand.

One day, Vertumnus came up with a new disguise, as an old crone with a bonnet over her white hair, and leaning on her walking stick. This too got him into the garden, and he was able to engage the beautiful Pomona in conversation. Vertumnus almost gave himself away when he kissed her overenthusiastically, but managed to control himself and tried to give Pomona some womanly advice about marriage.

Dropping subtle hints as to his true identity and desire for her, the old woman commended Vertumnus as a husband, and told Pomona the cautionary tale of Iphis and Anaxarete to press his case. Vertumnus was still getting nowhere with Pomona, though, so transformed himself back into his own form, as a young man, which finally won her heart.

The outstanding depiction of this wonderful story is Rubens’ Vertumnus and Pomona from 1617-19. Vertumnus has assumed his real form, that of a handsome young man. Pomona looks back, her sickle still in her right hand, and her rejection of his advances is melting away in front of our eyes.

Rubens even offers us a couple of rudely symbolic melons, and provides distant hints at Vertumnus doing the work in the garden while Pomona directs him, at the upper left.

The death of Julius Caesar (Book 15)

The closing story of the final book of his Metamorphoses must have been the most challenging to Ovid. Here, he had to tell of the assassination of Julius Caesar, whose adopted heir Augustus was the current emperor of Rome. Doing so without causing offence required all of Ovid’s poetic skills.

Ovid accomplishes this by using the story to praise Augustus. He writes that it was the unquestioned divinity of Augustus which made Julius Caesar similarly divine, although Augustus wasn’t actually the son of Caesar. His handling of Caesar’s assassination is similarly finely balanced.

Ovid casts the murder of Julius Caesar by a pact of Roman senators in the Senate itself as an inevitable consequence of the plots against him, which even the gods could not avert: it was fated. When Venus pleads the case for Julius Caesar to be transformed into a god, Jupiter confirms that Caesar had reached his alloted time, that his years of life on earth were at an end, and that his “son” Augustus was the cause for Caesar to be elevated to the gods.

With that, the dying Julius Caesar was transformed into a god and star by the process of catasterisation.

In Jean-Léon Gérôme’s The Death of Caesar from 1859-67, Caesar’s corpse lies abandoned on the floor below the steps of the portico, as his joint assassins make their way out, brandishing their daggers above their heads in unity and triumph.