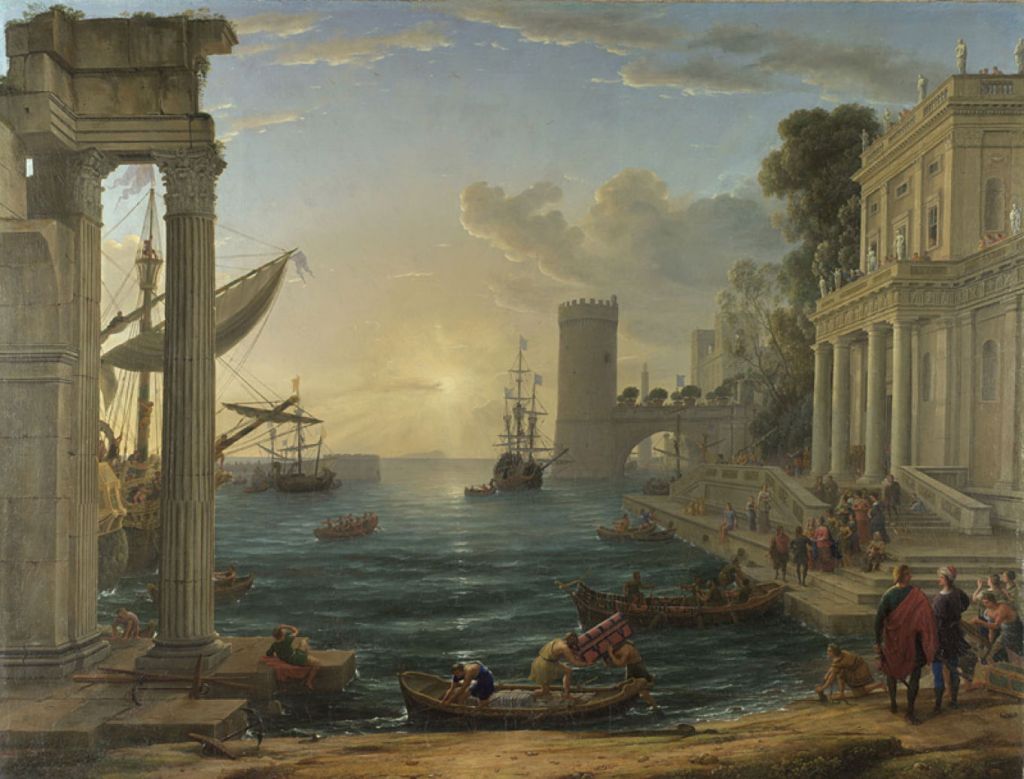 A few years ago, Winsor & Newton reintroduced, as a professional watercolour, a blue paint which had been used very little since the early eighteenth century: Smalt, sometimes known as Dumont’s Blue. It’s a very ancient pigment, possibly dating back to Egyptian times, and one of the strangest, as the colour is not just locked inside pigment particles, but those particles are composed of ground glass.

For over four millenia, people have been able to make blue-coloured glass by adding minerals such as smaltite to potassium glass during production. It is not known when it was discovered that this blue glass could be ground into a powder and used as a pigment, though. There have been claims that this was first used by a Bohemian glassmaker in about 1550, but there are scattered examples of its use long before then, and at least one lump of cobalt blue glass dates back to around 2000 BCE.

From the late middle ages onwards, Smalt has been one of the mainstay blues, alongside the far more costly ultramarine, with which it can be confused, being a purplish blue. With much of the particles being made of transparent glass, though, it has very low covering power.

As a cobalt salt, it acts as a drying accelerator in oil paint, and was used extensively for that property alone, particularly when mixed in small quantities with slow-drying dark paints. Its one vice, though, is that it can discolour, becoming paler and losing chroma over time. 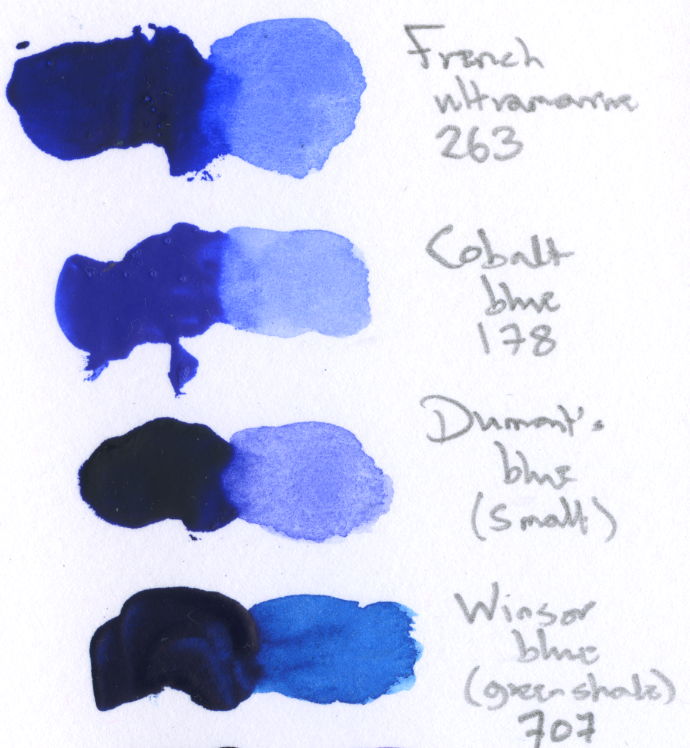 Above is a selection of the blues available in Winsor & Newton’s Artists’ Watercolour range, including the new Smalt. Each sample is shown straight from the tube, and when painted out. The sample at the top is modern synthetic Ultramarine, that below is Cobalt Blue, and below that is modern Smalt. Its purplish tint is apparent even when compared with Ultramarine.

It had been thought that The Adoration of the Shepherds from about 1635 was painted by Murillo, but it is now attributed to an unknown Italian artist. Most of its blues have retained their chroma, but the two substantial areas of faded blue-grey clothing on the shepherd in the foreground (hands clasped in prayer in from of the infant Christ) have been found to contain Smalt which has discoloured.

This loss of chroma is quite variable, and most probably relates to the relative instability of the potassium glass used. However, cobalt salts are normally considered to be fairly stable pigments, so I suspect that a more complex mechanism may be involved.

When the paint layer of works made between about 1550 and 1730 is suitably analysed, a large proportion which include blue pigment feature Smalt. Its use declined rapidly during the early eighteenth century, as Prussian Blue replaced it. Although little used during the nineteenth and twentieth centuries, it has never vanished from the palette completely. With its reintroduction a few years ago, it may yet make a comeback.

Paolo Veronese used Smalt as the main blue for the skies in his series of four paintings The Allegory of Love. This is Respect, from about 1575, which also has suffered some weakening of chroma in its sky.

Smalt has been detected in some of the blues in Rubens’ magnificent triptych in Onze-Lieve-Vrouwekathedraal, Antwerp, of which this Descent from the Cross is the centre panel.

Pieter Brueghel the Younger’s Massacre of the Innocents from about 1615 is another victim of discolouration, where the Smalt has faded in its sky.

Depending on how coarsely the glass was ground, and its original intensity of blue, Smalt was available in a range of chromatic intensities. Here, Hendrick ter Brugghen seems to have opted for quite a pale blue for the dress of Leah, in his Jacob Reproaching Laban for Giving him Leah in Place of Rachel (1627). I suspect that Smalt is also used in the pale blue drapery at the left.

Anthony van Dyck apparently used Smalt as the basis for the blue of the sky in his Equestrian Portrait of Charles I from about 1637-8. This appears to have undergone very little discolouration, although it is contemporary with the Adoration of the Shepherds above.

Smalt has also been found in the blue in the sky of Claude Lorrain’s superb Seaport with the Embarkation of the Queen of Sheba (1648).

The distinctive fine glass shards of Smalt have been found in several of Jan Vermeer’s paintings, including The Little Street, painted in about 1657-58. Not only is it in the sky here, but I suspect in some of the blues on the buildings too, and perhaps the skirt of the more distant woman.

A few painters continued to use Smalt even when Prussian Blue was widely available. One of these was William Hogarth, a puzzling user of Smalt as he was not born until 1697, so would have experienced the rapid rise of Prussian Blue when still newly-trained. However, testing of the blues seen in the ornate carpet here has shown them to contain Smalt.

One of the last significant attested uses of Smalt is in the sky of Caspar David Friedrich’s Winter Landscape from about 1811. Perhaps Friedrich found it more suitable for the subtle colour transitions which he uses here. I have been unable to find any evidence that he used Smalt more generally in his works.