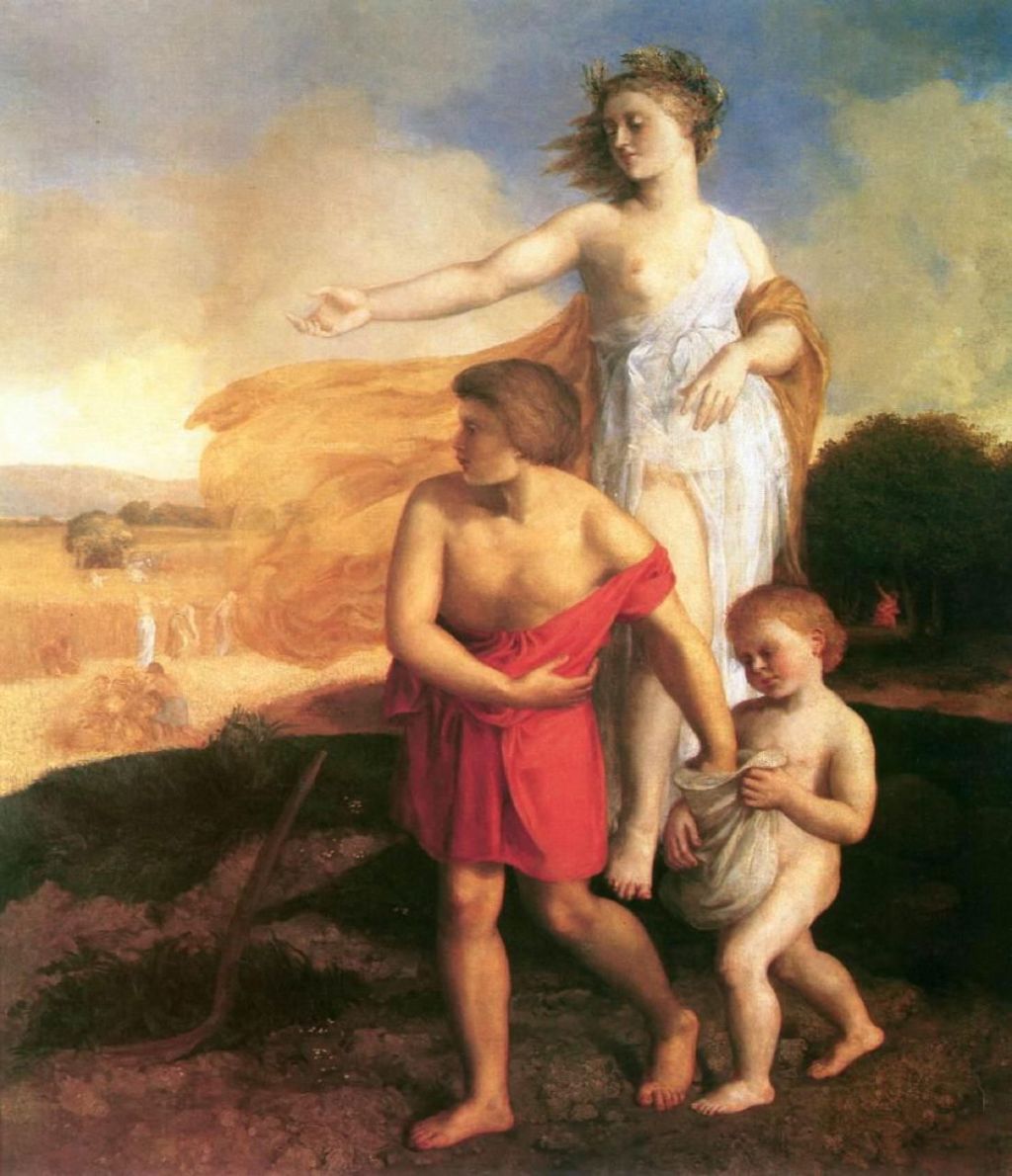 As Ovid reaches the end of book 5 of his Metamorphoses, there is time for one last story, narrated indirectly by the Muse Calliope.

With Arethusa transformed into an underground river, Ceres harnesses a pair of dragons to her chariot, and travels to visit Triptolemus. She gives him seed, which he is to sow in unproductive land, which has never been cultivated or has long lain fallow. The young Triptolemus flies away in her chariot, and eventually comes to Scythia, where he enters the palace of its king, Lyncus.

Triptolemus provides the king with seed, promising him rich harvests from it. Lyncus is jealous, though, so entertains Triptolemus lavishly; when the young man is sound asleep, the king tries to stab him in the heart. Ceres intervenes, and transforms Lyncus into a lynx:
“The envious Lyncus, wishing to appear
the gracious author of all benefits,
received the unsuspecting youth with smiles;
but when he fell into a heavy sleep
that savage king attacked him with a sword —
but while attempting to transfix his guest,
the goddess Ceres changed him to a lynx: —
and once again she sent her favoured youth
to drive her sacred dragons through the clouds.

That completes the stories sung by the Muses in their contest against the nine pretenders, the Pierides. Ovid closes the book by reminding us of their fate:
“But these Emathian sisters laughed to scorn
our threatening words; and as they tried to speak,
and made great clamour, and with shameless hands
made threatening gestures, suddenly stiff quills
sprouted from out their finger-nails, and plumes
spread over their stretched arms; and they could see
the mouth of each companion growing out
into a rigid beak. — And thus new birds
were added to the forest. — While they made
complaint, these Magpies that defile our groves,
moving their stretched-out arms, began to float,
suspended in the air. And since that time
their ancient eloquence, their screaming notes,
their tiresome zeal of speech have all remained.”

As far as I can tell, there have been very few paintings made of Lyncus trying to kill Triptolemus, or of the king being transformed into a lynx. The one which I have been able to trace is sadly not available as an image for use here.

Triptolemus was an important deity, though, as an assistant to Ceres in bringing productive grain crops to Europe, and for his involvement in the secret rites of the Eleusinian Mysteries. I have chosen three images which show Triptolemus in his role of providing seed to produce nourishing crops.

This tondo of a red-figure Attic cup, now in the Louvre, is typical of many classical depictions of Triptolemus and Ceres, and dates from 470-460 BCE. The young deity is sat in Ceres’ special winged chariot, as she provides him with seed to be distributed to the lands around the world.

Triptolemus also assumes the same role in the left foreground of Jerzy Siemiginowski-Eleuter’s splendid Allegory of Summer (1684—86), made as a ceiling painting for the bedroom of King John III Sobieski of Poland.

Ceres herself is in the centre foreground, handing an unusual blue floral wreath to Triptolemus. Above him is an allegory of the night, with the figure of Aurora-Astraea, who was modelled by Queen Marysieńka (Marie Casimire Louise de la Grange d’Arquien), wife of King John III Sobieski of Poland (1629-1696).

Low in the sky is the ‘dog star’, which is generally visible across Europe in the summer. Above is the chariot of the sun, which is in the constellation of the lion, Leo. These symbols of summer are coupled with the more obvious signs of harvest, to complete the elaborate seasonal allegory.

Károly Brocky’s Ceres and Triptolemos (c 1853) is a later and simpler evocation of these gods and their roles in productive agriculture, which uses a quiet form of multiplex narrative. In the foreground, Ceres is bidding the young Triptolemus to sow seed from the bag carried by a young child.

However, in the background the harvest is also in full swing, many months after that seed would have been sown.

I regret not having any lynxes to show, but love Siemiginowski-Eleuter’s intricate allegory.