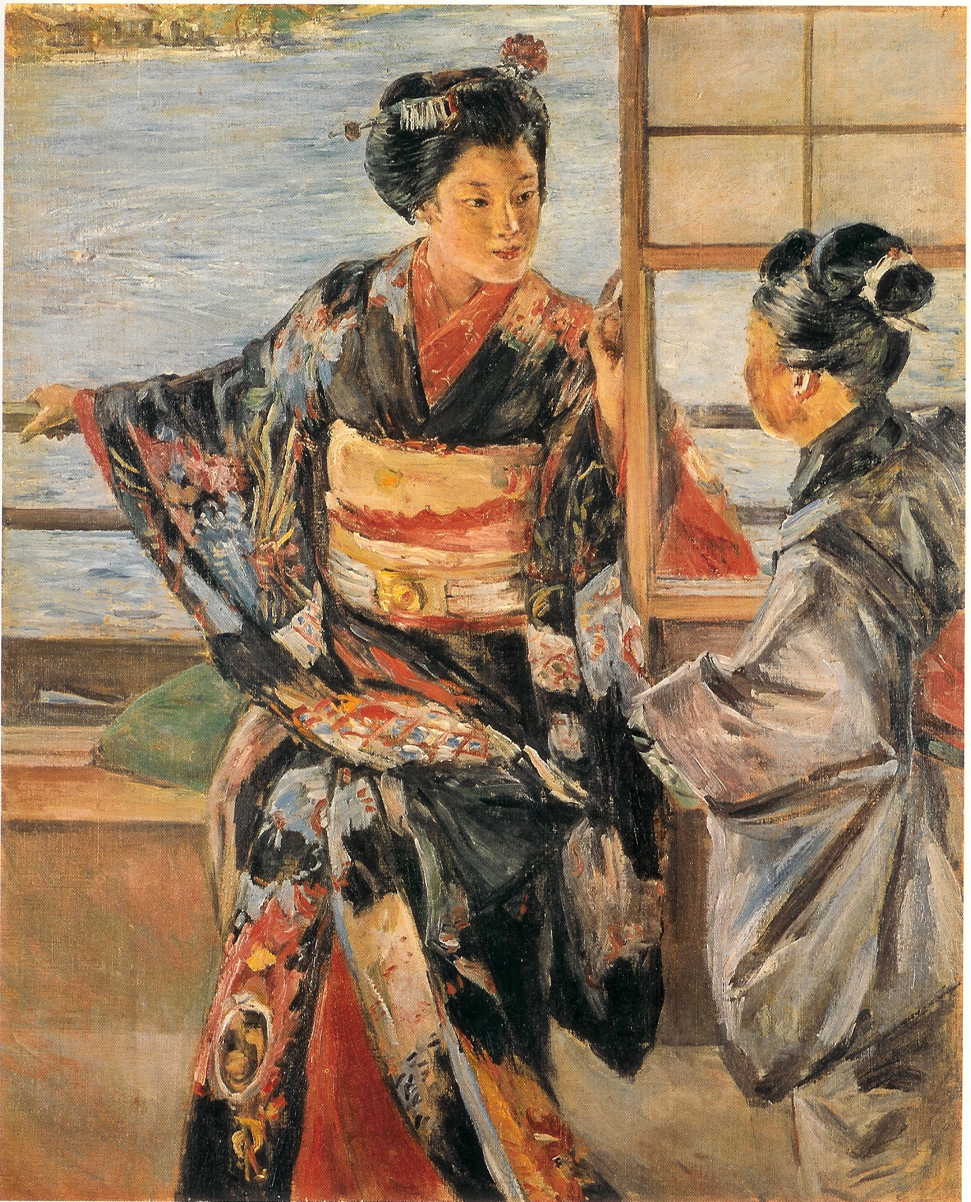 The reputation and popularity of the art academies in Paris became truly international in the late nineteenth century. The best and brightest of talent from across the world came to learn at the École des Beaux-Arts, the Académies Julian and Colarossi, other lesser schools, and in ateliers, and the Impressionist style was spread worldwide.

Several of the Impressionists had been influenced by the art of Japan, particularly woodblock prints known as ukiyo-e from Masters such as Hokusai, in what is often termed japonisme. It was therefore only appropriate that Japanese painters should be trained in Paris and take with them the latest avant garde European styles and techniques back to their traditional Japanese culture.

Sadly many of the paintings made by these artists were destroyed during the incineration of Tokyo and other cities in Japan during the Second World War. Few are known outside Japan. I therefore offer a small range of works from three Japanese Impressionists.

(Note that I have followed the protocol of placing their family names first; you may thus see Asai referred to as Chū Asai, which follows the western order of surname last.)

Born into a samurai family in Sakura, to the north-east of Tokyo, in 1856, he went to Tokyo in 1873 to study English. He became interested in the arts, and in 1875 became a pupil of Kunisawa Shinkuro in some of his early western oil painting classes. In 1876 he studied under Antonio Fontanesi, an Italian who painted in the style of the Barbizon School or Macchiaioli, and who was engaged by the Government of Japan to bring western drawing and painting to Japan, between 1876-8.

In 1889 he founded the first group of western-style (yōga) painters in Japan, and in 1898 was appointed professor of the forerunner of the Tokyo University of the Arts. In 1900 he moved to Paris for two years of study of Impressionism.

On his return to Japan he was appointed professor at what is now the Kyoto School of Arts and Crafts at the Kyoto Institute of Technology, and founded the Kansai Arts Institute. However he died in 1907.

Asai was initially taught to paint in the style of the Barbizon School, but became impressionist when in Paris in the early years of the twentieth century. He prepared the ground for Kuroda, and had he lived longer he should have had even greater impact on Japanese painting.

Born the son of a samurai in Kagoshima (the far south-west of Japan), his family moved to Tokyo, where he was exposed to modernising ideas. He first learned English, then switched to French in preparation for his university training. He moved to Paris in 1884 to study law, being supported by his brother-in-law, a member of the Japanese diplomatic mission in France.

In 1886 he was encouraged by visiting Japanese painters and an art dealer to switch to studying painting, as it would better help his country. He started his studies in the atelier of Collin later that year. There he met Kume Keiichirō, also a student of Collin’s, and together they explored plein air painting. In 1890 he moved to the international artists’ colony at Grez-sur-Loing, south of Paris, which was also visited by members of the Skagen group, John Singer Sargent and Theodore Robinson, among many others.

He returned to Paris in 1893, and painted Morning Toilette, the first painting of a nude to be shown in public in Japan (and tragically destroyed during World War Two). He then returned to Japan later that year, where he applied his impressionist techniques and style to native Japanese subjects. He started to reform Japanese painting from its Barbizon School style, introducing light and bright colours. He taught, transforming the Seikokan painting school into his Tenshin Dojo.

Morning Toilette caused uproar when it was first exhibited at the Fourth Domestic Exposition in Kyoto in 1895, as did the 21 works he showed at the Western-style painters salon later that year. In 1896, together with Kume Keiichirō, he formed a new group known as the Hakubakai, after a brand of sake drink, which promoted modern Western-style painting over its thirteen exhibitions until it dissolved in 1911.

In 1896 he was appointed director of a new department of Western Painting at the forerunner of Tokyo National University of Fine Arts and Music, where he placed emphasis on the teaching of history painting, surprisingly. A triptych of his won a silver medal at the International Exposition held in Paris in 1900, and he was appointed an Imperial Court painter in 1910. He inherited the title of Viscount in 1917, and was awarded the Grand Cross of the French Legion d’Honneur. He was finally awarded the Order of the Rising Sun immediately after his death in 1924.

Kuroda was trained to paint in impressionist style, and did so throughout his career. He was probably one of the founding fathers of the Western painting tradition in Japan, thus an artist of singular importance in its culture. He was also widely acclaimed in his day as a painter of significance in Europe.

Born in Saga (then known as Hizen) in the far west of Japan, he went to Paris, where he studied in the atelier of Collin alongside his friend Kuroda, and in the Académie Colarossi. He spent periods in Barcelona and Île-de-Bréhat, returning to Japan in 1893.

There he worked with Kuroda to modernise Japanese painting, becoming a professor in Kuroda’s new department at the forerunner of Tokyo National University of Fine Arts and Music. He died in 1934.

Kuroda Seiki
Wikipedia
Kuroda Memorial Hall of the Tokyo National Museum, with many of his works shown, in English or French

Kume Keiichirō
Wikipedia (only a stub)

I have been unable to find any accessible books with good accounts of Japanese Impressionism, but there is limited coverage in:
Broude N ed. (1990) World Impressionism: The International Movement, 1860-1920, Abradale Press, Harry N Abrams. ISBN 0 8109 8115 7. (A pioneering survey of impressionism around the world, now long out of print but sometimes available secondhand.)