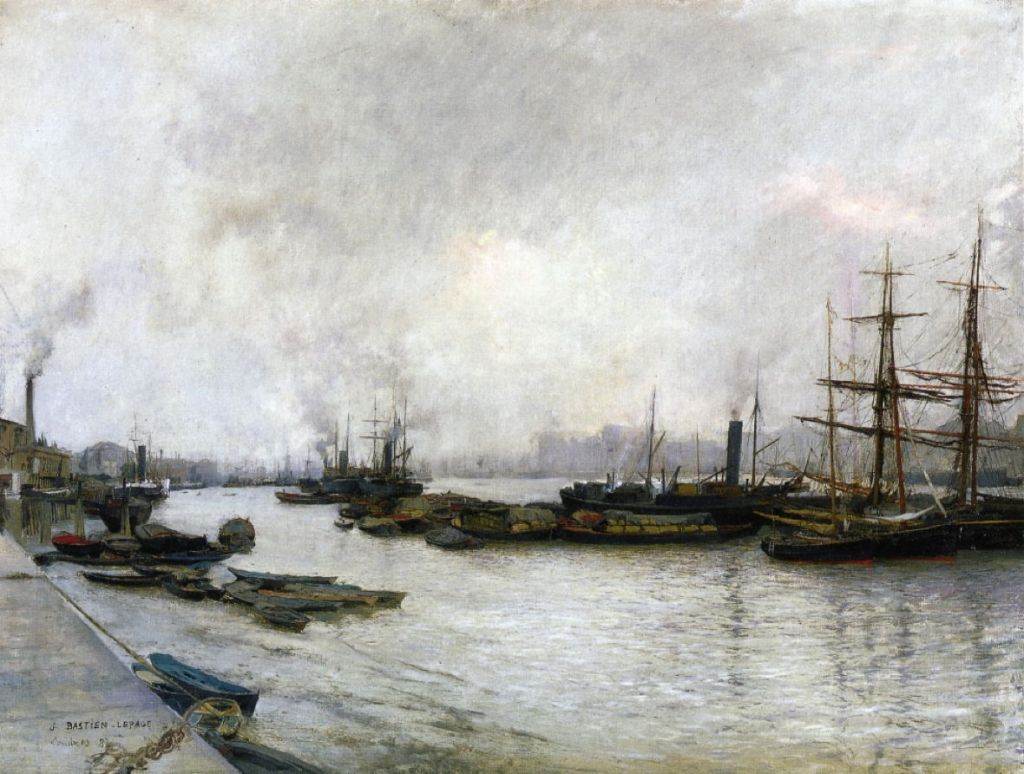 Yesterday we cruised down the River Thames in paintings, from Maidenhead in Berkshire (with JMW Turner) to Battersea Bridge (with James Abbott McNeill Whistler). Today we board our boat at Westminster and head down river in the company of some of Europe’s finest landscape painters, from France, Italy, Belgium and Britain.

Although Canaletto painted many fine views of London when he lived in England between 1746-56, including this of The River Thames looking towards Westminster from Lambeth (1747), few compare with those of his native Venice.

John Atkinson Grimshaw’s famous Reflections on the Thames, Westminster from 1880 looks upriver towards the distinctive clock tower and buildings of the Palace of Westminster, Big Ben and the Houses of Parliament. It’s almost certainly based on studies made in full daylight, though.

The time shown on the face of Big Ben appears to be 1045, yet its full moon is low in the western sky, indicating that it’s approaching sunrise. As this view looks into the light, perhaps contre nuit, the figures seen at the right should be in the shade. Their cast shadows aren’t coherent either, and some would indicate that the moon should be in a quite different position. This was most probably painted in the studio from sketches made in broad daylight.

Among six paintings which Pissarro started work on during his visit to England in 1890 was this view of Charing Cross Bridge, London from Waterloo Bridge. For this he made a sketch in front of the motif, then following his return to his studio in Éragny he painted this in oils. This looks south-west, towards a skyline broken by the Palace of Westminster and the tower of Big Ben.

Émile Claus’s Sunset over Waterloo Bridge from 1916 was painted from a location on the north bank of the Thames slightly to the east of Waterloo Bridge, the north end of which is prominent, and looks south-west into the setting sun, up river.

When Claude Monet fled from the Franco-Prussian War to London in 1870, he concentrated on painting the Palace of Westminster. During his visits to the city in the early twentieth century, he returned to those views and painted a series of Charing Cross Bridge and Waterloo Bridge, here an example from 1903. These are among the most quintessentially Impressionist paintings, exploring a range of conditions of light and visibility, including the bane of the winter months in London, its fogs.

During the seventeenth century, the winters were often so cold that the river here froze over, enabling a series of Frost Fairs.

This view of the Frost Fair on the Thames, with Old London Bridge in the Distance painted by an unknown artist in about 1685, shows a winter when the ice here reached a thickness of nearly thirty centimetres (12 inches). Most of the people of London have taken to the frozen surface of the River Thames to visit the fair.

Old London Bridge was built of stone between 1176-1209, and had a chapel at its centre dedicated to Thomas Becket, the Archbishop of Canterbury who was murdered; that formed the start of the pilgrimage route to Canterbury. Over the centuries it survived major fires and other disasters, and served as one of the city’s major shopping centres. Its gate was used to display the severed heads of those deemed traitors, including Thomas More and Thomas Cromwell. It was finally replaced in 1831.

From 1880, Jules Bastien-Lepage visited London repeatedly. Blackfriars Bridge and the Thames, London (1881) is his fine depiction of this stretch of the River Thames, with his characteristic gradation of detail from its foreground into the distance.

Henri Le Sidaner also visited Britain on several occasions, and in 1906-07 painted this view of St. Paul’s from the River: Morning Sun in Winter, which may have been inspired by Monet’s series paintings of Rouen Cathedral, here expressed using his own distinctive marks.

In 1882, Bastien-Lepage was back, to paint The Thames, London. This maintains fine detail right into the far distance, except where it’s affected by the smoky and hazy atmosphere typical of the city at that time.

Beyond here the river becomes increasingly industrial. Once the busiest port in the country, it saw trade with the whole of the world. The extensive docks have now been filled, although their names remain in places like Canary Wharf and the Isle of Dogs. The south bank retains its maritime history too, with what was once a hospital for seamen, then a Royal Naval College, at Greenwich, where James Thornhill’s huge narrative paintings make its Painted Hall.

Further downriver, after we have passed through the Thames Barrier protecting the city from floods, are the former Royal Arsenals at Woolwich, remembered now in the name of the local football team, Arsenal. Eventually, after miles of what used to be malarial mud flats, we reach the fort at Tilbury, in Essex.

Clarkson Stanfield’s Tilbury Fort – Wind Against the Tide from 1853 shows one of the defensive forts which lined the River Thames, here as it opens out into the North Sea by the flatlands of Tilbury in Essex, now a large port in its own right. The weather and sea are typically Stanfield, and the title even explains the mechanism of these short, steep seas.

These are commonly encountered when the direction of tidal flow is the opposite of that of the wind. The latter then blows the waves into steeper crests, increasing the difficulties for those in smaller vessels, particularly the fishermen in the small boat in the left foreground. In this case, the tide must be in flood, running from right to left up the estuary, and the wind from the west, blowing from left to right, as indicated by the pennant of the Thames barge, the vessel most distinctive of this river.

Beyond Tilbury is Canvey Island, on the north bank of the progressively widening estuary. It’s here that John Constable painted one of his late masterpieces.

Hadleigh Castle, The Mouth of the Thames – Morning after a Stormy Night (1829) looks east from the river into the southern North Sea. It’s time to thank our artists and return home.