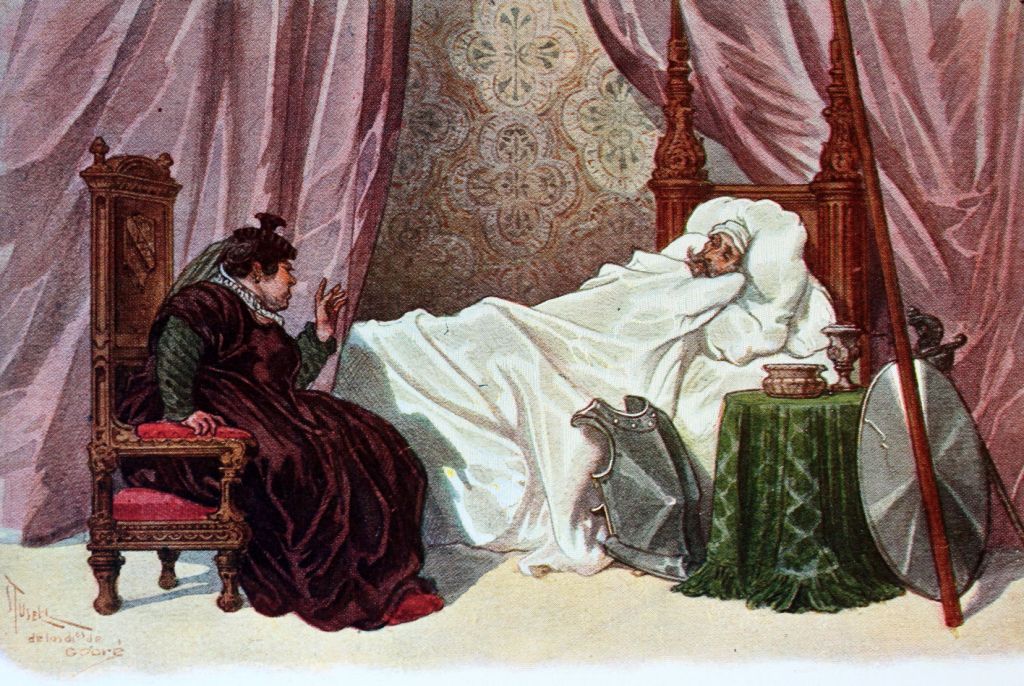 In the previous episode, Sancho Panza had assumed the governorship of the ‘Island’ of Barataria amid general rejoicing. Once he’d given thanks and been presented with the keys to the town, he was taken into the courtroom to sit in judgement on a series of disputes. The first was between a farmer and a tailor, and his resolution brought laughter. The second involved a loan which the lender insisted hadn’t been repaid, but Sancho showed that it had been, thanks to a cunning trick in which the sum had been hidden in a walking stick. The third was a woman who claimed a herdsman had raped her, but Sancho demonstrated how she fought harder for money than to preserve her virginity. Back in the palace, Don Quixote fell victim to another of the Duke and Duchess’s tricks when trying to dodge the advances of the maid Altisidora. The unintended result was that he was confined to bed for five days after a cat dug its claws into his face.

After the new governor had demonstrated his ability to settle disputes, he was taken to his palace to eat, with a doctor seated beside him. No sooner had Sancho started to eat each dish put in front of him than it was whisked away again. The doctor explained it was his role to ensure the governor remained healthy by selecting his food. The first dish of fruit had been too moist, the second too spicy. Neither would he be allowed to eat the awaiting partridges because of a Hippocratic aphorism forbidding them.

Sancho pointed out he was starving, and asked the good doctor to review the other dishes before them. After he had ruled out everything else, the doctor decreed that only a hundred wafer-tubes and some quince jelly were fit for his consumption. The governor glared at him, but the doctor asserted his qualifications.

Sancho told him to get out of his sight before he assaulted him. As the doctor tried to escape, a messenger arrived from the Duke and handed over a letter which was read aloud by Sancho’s Basque secretary.

This brief note warned Sancho that the Duke’s enemies were about to launch a serious attack on the town one night, and that four assassins were on the loose, intent on killing the new governor.

Sancho’s immediate response was to order that the doctor was thrown into the dungeon, as the person most likely to kill him from starvation. He then told his secretary to send his acknowledgement to the Duke. Next a page announced that a farmer wanted to see the governor urgently. Although Sancho still had his mind on lunch, and had to be assured by the steward that he’d make up for it later at dinner, the farmer entered and detailed his requests.

The farmer said that he came from a village near Pancho’s, then embarked on a series of long-winded digressions about the death of his wife, and the fact that both sons were students. The younger of them, studying for his BA, had fallen in love with the beautiful but severely disfigured daughter of a rich farmer. What the farmer wanted was a letter to her father asking for their marriage to proceed, despite his son being possessed by the devil. He even had the gall to ask the governor for money towards his son’s dowry.

Sancho lost his temper with the farmer, who was ushered away.

Meanwhile, back in the Duke and Duchess’s palace, Don Quixote was still recovering from his encounter with the cat. One night when he was in bed he heard his door being unlocked and presumed he was to be visited by the young Altisidora. Instead it turned out to be an old duenna, who saw the knight standing on his bed like a ghost, and promptly dropped her candle then fell over her own skirts.

Don Quixote demanded to know who she was and what she wanted. The woman replied that she was Doña Rodriguez, the Duchess’s duenna of honour, who had an urgent need for the knight to address. The knight got the wrong end of the stick at first, but she went out, relit her candle, and was returning as the knight was on his way to lock her out.

After they had assured one another of their honourable intentions, Don Quixote returned to his bed, and the duenna sat herself on a chair.

She told him that she came from a good family in Asturias, but her parents had become impoverished, so they took her to Madrid and put her in service as a seamstress. After her parents had died, the old aristocrat in the household in which she worked fell in love with her. The mistress had them married, and they went on to have a daughter of their own. After that, she was left a widow, and her mistress the Duchess took her and her daughter to Aragon when she married the Duke there.

A wealthy local farmer’s son had fallen in love with her daughter, seduced her, but was refusing to keep his promise to marry the girl. Although the duenna had asked the Duke to put pressure on the boy’s father, the Duke kept borrowing money from that farmer and wouldn’t upset him. She asked the knight if he couldn’t do something to help, as her daughter was even more beautiful than Altisidora, or the Duchess herself. The duenna then revealed that the Duchess’s beauty depended on her having two fountains in her legs, allowing the poisons from her body to drain out.

Don Quixote believed her, but then the bedroom door burst open, making the duenna drop her candle and plunge the room into darkness. Although the knight couldn’t see, the duenna was held by her throat while her skirts were lifted and she was slapped repeatedly with a slipper. Having dealt with her, the invisible figures then tormented Don Quixote by pinching his body for half an hour before leaving.

That completes the forty-eighth chapter of the second book of Don Quixote.