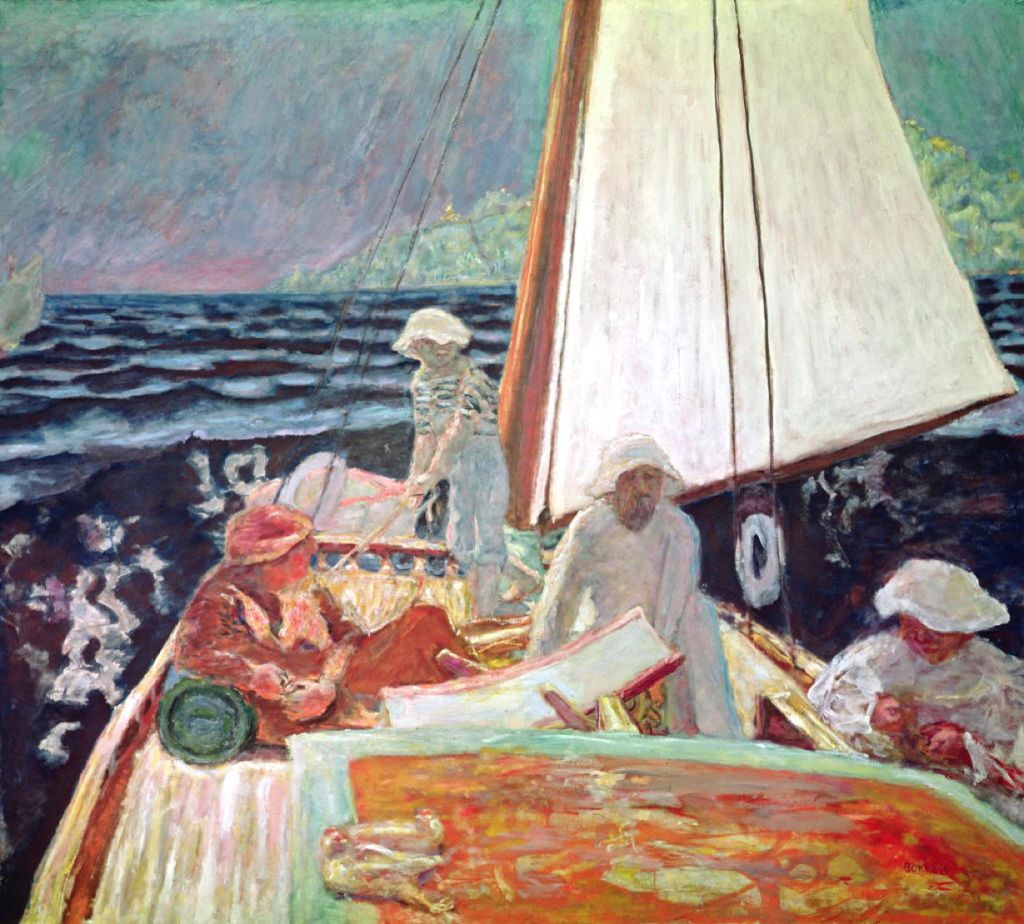 In the first article of this pair looking at paintings of leisuretime yachting, I traced it through its rising popularity in the middle of the nineteenth century, in paintings by French, Nordic and British Impressionists.

Although little-known today, the French artist Paul César Helleu, a close friend of John Singer Sargent, was enormously successful, enabling him to indulge in yachting. Many of his later paintings are centred on those activities. Bedecked Yacht Entering Port (1899) shows a racing yacht proceeding into harbour under power, presumably after a race.

Regatta (1901) is another of Helleu’s yachting scenes, this time almost certainly a view looking out from Cowes Harbour on the River Medina, Isle of Wight, over the racing grounds of the Solent. At the left is the clubhouse of the Royal Yacht Squadron, which still organises the racing.

Le Grand Pavois (c 1901) uses the French term for what in English is called dressed overall, and refers to the naval tradition of displaying a rich variety of flags as a mark of celebration or recognition. As in Regatta above, this appears to be at the Royal Yacht Squadron in Cowes, and would have taken place during the annual Cowes Week racing, perhaps to welcome the monarch. If painted in the summer of 1901, that would have been for the as-yet uncrowned King Edward VII, whose mother, Queen Victoria, had died that January at Osborne House, her palace on the other side of the River Medina.

The Artist’s Yacht, the Port of Sanville (1913) shows two grand yachts in Sanville, a port which I have been unable to trace, surprisingly. Either would attest amply to Helleu’s opulence. He was an early friend of Coco Chanel, the fashion designer, perfumier, and businesswoman. It was Helleu who advised her to adopt beige as a signature colour, and his son and grandson worked as her artistic directors.

Meanwhile on the Mediterranean coast of France, several of the avant-garde painters devoted much of their time to yachting. Among them was Paul Signac, who sailed throughout Europe and the Mediterranean from around 1892, as far as Istanbul.

From 1897 Signac moved to the south of France, living at first in The Port of Saint-Tropez (1901-2), which was undiscovered as a resort at that time. The area became popular with post-Impressionist painters, including Pierre Bonnard, who also sailed and settled there.

The warmer climate of Cagnes saw Renoir’s arthritis improve, enabling him to paint many plein air oil sketches. The Port of Marseille, Fort Saint-Jean from 1906 is a marvellously loose oil sketch of crowds at the waterside and yachts, on a fine and sunny day at Marseille, just along the coast from Cagnes.

Some of the later British Impressionists were also enthusiastic painters of yachting. Alice Fanner’s Burnham-on-Crouch – The Smack Race shows two racing boats heading into Burnham, a yachting centre in south-east Essex, where boats on the moorings are fully dressed for the occasion of the regatta.

I close with four of Pierre Bonnard’s many paintings of yachts and yachting.

Bonnard’s Boats in the Harbor, Le Cannet shows yachts in the harbour at what I think should be referred to as Cannes, the name of the town on the Mediterranean coast, rather than Le Cannet, which is just inland of Cannes and where Bonnard later came to live.

Bonnard’s The Beach (Arcachon) from about 1922, shows this beach in south-west France, in the southern part of the Bay of Biscay. It’s packed, with tents and awnings covering the golden sand, crowds of people and moored yachts in the distance. Beyond them is a vague line of breakers, where the bed of the Atlantic Ocean rises to form the shallows of the coast of France.

Several of the artists who had moved to le Midi around the turn of the century were keen yachtsmen. Bonnard’s painting of Paul Signac on board his yacht, Signac and his Friends Sailing, dates from 1924.

By 1925, when Bonnard painted Boats at Antibes, several of the harbours along the French Mediterranean coast had become popular with yachts. In less than a century, they had switched from working boats, fishing or plying various trades, to glittering arrays of leisurecraft.