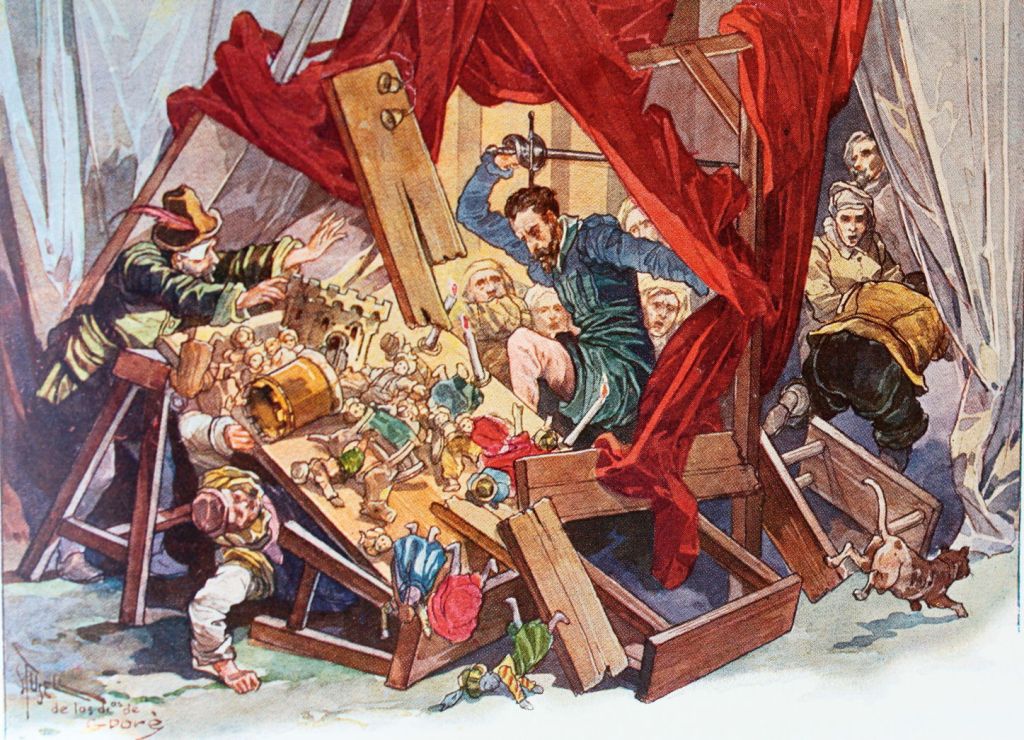 In the previous episode, Don Quixote, Sancho Panza and their guide were on their way to an inn near the Cave of Montesinos after its descent by the knight. They were passed by a man hurrying along a mule loaded with lances and halberds. After they tried a nearby hermitage, the three reached the inn, where the man with the mule explained his weapons were to arm a village which had taken to braying like a donkey, against others who were persecuting them. Next Don Pedro, a well-known puppeteer with a performing ape, arrived and was made welcome. Don Quixote was convinced that Pedro had made a pact with the devil when he revealed he knew much about the knight’s errantry. All those at the inn then went to watch Don Pedro’s puppet theatre.

As the puppet show started, Don Pedro’s boy announced grandly how it was going to tell how Don Gaiferos freed his wife Melisendra who was a prisoner of the Moors in Saragossa in Spain. The boy then narrated the play, pointing out characters like Charlemagne, who was Melisendra’s foster father, but wouldn’t get involved.

Don Quixote interrupted, telling the boy to stick to the point, which was reinforced by the words of Don Pedro from inside the theatre. Soon the knight had interrupted again, this time to correct the boy that the Moors didn’t have bells but used kettle drums to raise the alarm. When the Moorish cavalry rode out to find Don Gaiferos and the rescued Melisendra, Don Quixote could contain himself no longer and rose to his feet, drew his sword, and started to hack at the puppet Moors with it.

Don Pedro was reduced to tears and pleading for the knight to stop destroying his puppets, but nothing could stop Don Quixote’s massacre of the papier-maché figures until they were reduced to a pile of fragments.

With that the knight calmed down and sought approval for his actions from the other spectators. Sancho Panza comforted the puppeteer, reassuring him that his master would compensate for the loss. But Don Quixote maintained that this was all the work of enchanters, before finally offering to pay for the damage he had caused.

One by one, Don Pedro picked up his mutilated puppets and assessed the cost. The final total was agreed and paid by Sancho Panza, with an extra sum for the fact that the performing ape had escaped in the chaos. They then all sat down and ate supper together at Don Quixote’s expense. The following morning the man with the mule laden with arms left before daybreak, Don Quixote paid off his guide, and Don Pedro got on his way early. Finally, at about eight o’clock, Don Quixote and Sancho Panza were back on the road together.

Cervantes then reveals, through a fictional narrator, that Don Pedro the puppeteer was one of the convicts whom Don Quixote had released from the chain-gang, and the same individual who had stolen Sancho Panza’s donkey. This man had bought the ape and trained it to perform its routine, as a cover for the trick which he played by obtaining information about people in his audience. As soon as he had walked into the inn the puppeteer had recognised Don Quixote and Sancho Panza, and realised how he could trick them, as they hadn’t recognised him.

Don Quixote decided that he and his squire would see the River Ebro before proceeding to Saragossa. A couple of days later, when they were making their way up a hill, they heard the noise of an army on the march. As they drew near they recognised it as a formation of about two hundred men from the village of the braying on their way to fight another village which had mocked them.

As might be expected, Don Quixote saw the opportunity to deliver them a speech, in which he tried to tell them that they hadn’t been dishonoured in any way, and that they shouldn’t fight.

When he paused for breath, Sancho underlined his master’s authority and repeated his message to them. As he finished, the squire brayed loud and long.

The villagers misunderstood that bray, thinking that he too was making fun of them. They hit Sancho so hard that he fell to the ground, which made Don Quixote raise his lance at them. The match was far from even, though, as stones rained down on the knight, and many crossbows and muskets were trained at him. Don Quixote turned Rocinante round and beat a hasty retreat from the army. Sancho was draped half-conscious over his donkey and allowed to follow his master. The men stayed where they were, but their enemy never showed up, so after dark they returned to their village jubilant.

That completes the twenty-seventh chapter of the second book of Don Quixote.