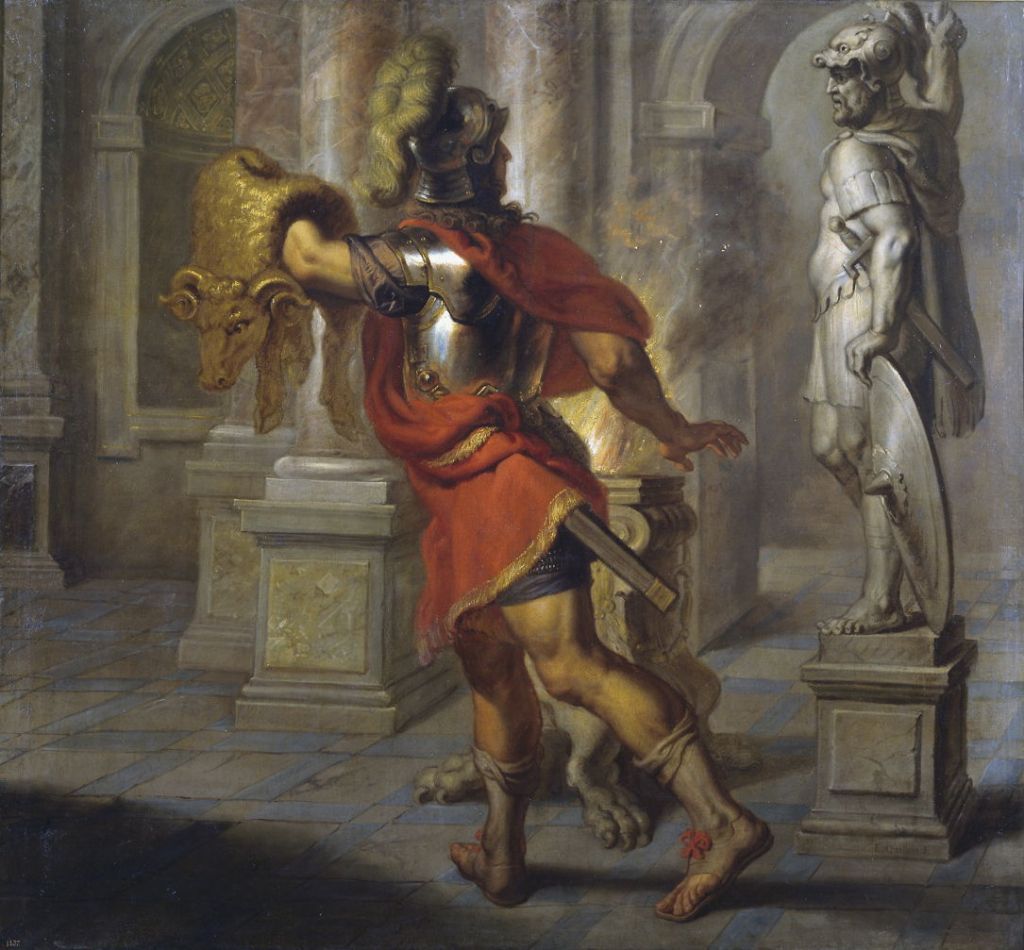 The story of Jason and the Golden Fleece is the second in my examples of classical ‘Quest’ sagas, after that of Virgil’s Aeneid last weekend. Unlike the Aeneid, which is an epic poem based on several myths and legends, and the Odyssey, an oral epic attributed to the ancient Greek poet Homer, the story of the Golden Fleece is a collection of often contradictory legends. Different versions of parts of the whole series appear in later literature, including Pindar’s Pythian Odes, Argonautica by Apollonius of Rhodes, Ovid’s Metamorphoses, and Euripides’ play Medea.

Poseidon sired a ram with a Golden Fleece, which by various means ended up in Colchis, where the fleece was hung on an oak in a grove sacred to the war god Ares. It was guarded by a dragon which never slept, and whose teeth generated warriors when they were planted in the ground.

Jason had challenged Pelias for his throne, and was told that he had to go on a quest to find the Golden Fleece in order to win that throne. He therefore assembled a crew for his ship the Argo, who became known as Argonauts, and set sail on that quest. They had a series of adventures on the island of Lemnos, with the Doliones, and in Thrace, before reaching Colchis.

When Jason and the Argonauts arrived in Colchis, they discovered that King Aeëtes was its owner. He set Jason three tasks to accomplish before he could take possession of the Golden Fleece:

To accomplish these, Jason enlisted the help of the king’s daughter Medea, a sorceress who, thanks to divine intervention by Hera through Aphrodite, had fallen in love with Jason. For his first task, Medea provided Jason with an ointment which protected his skin from the fire of the oxen; for the second, Medea explained how he should throw a rock into the middle of the warriors, causing them to kill one another; for the third, Medea provided a potion which put the guardian dragon to sleep, so that Jason could make off with the Golden Fleece. In return for her assistance, Jason promised to marry Medea.

John William Waterhouse’s painting of Jason and Medea (1907) shows her preparing the potion which Jason later gives to the dragon guarding the Golden Fleece. Medea wears a dress which suggests, in its bold icons, her role as a sorceress. In front of her, a flame heats ingredients for the potion, which she is adding to a chalice. Jason appears anxious, and is dressed and armed ready to go and fight the dragon.

Although identified as being The Etruscan Sorceress (1886), Elihu Vedder’s painting has all the symbolic associations of Medea. She is holding a vial which Jason used to capture the fleece, and at her feet is an open fire which is associated with preparation of the potion for the vial.

Frederick Sandys shows Medea (1866-68) at work, preparing a magic potion for one of Jason’s missions. In front of her is a toad, and other ingredients. Behind her, in a gilt frieze, is Jason’s ship the Argo.

The finest visual account of this story is in the frescoes of the Palazzo Ghisilardi Fava in Bologna, Italy. Directed by Annibale Carracci, his brother Agostino and cousin Ludovico contributed significantly to these eighteen separate images, between about 1583-84.

This work uses elaborate multiplex narrative to summarise much of Ovid’s account: at the left, two of the fire-breathing bulls are still yoked, in front of King Aeëtes. The army sprung up from the dragon’s teeth appear behind the wall, armed still with spears but no longer fighting.

In the foreground, Jason has put the dragon to sleep using Medea’s magic concoction, and is unhitching the Golden Fleece while he can. At the right, two of the Argonauts offer to help Jason (shown a second time) carry the fleece away.

In Jean François de Troy’s The Capture of the Golden Fleece from 1742, Jason reaches up to take the Golden Fleece from a branch of the oak tree. The artist has interpreted this prize as a lamb of rather modest size, which is visually disappointing. However, the hero’s left foot rests on the body of the dragon, whose nostrils emit steam. To the left of Jason is Medea, dressed as an eastern princess, and surrounding them are the Argonauts, whose ship is seen at the far left, preparing to set sail.

In tomorrow’s sequel, I will take up the story from there.