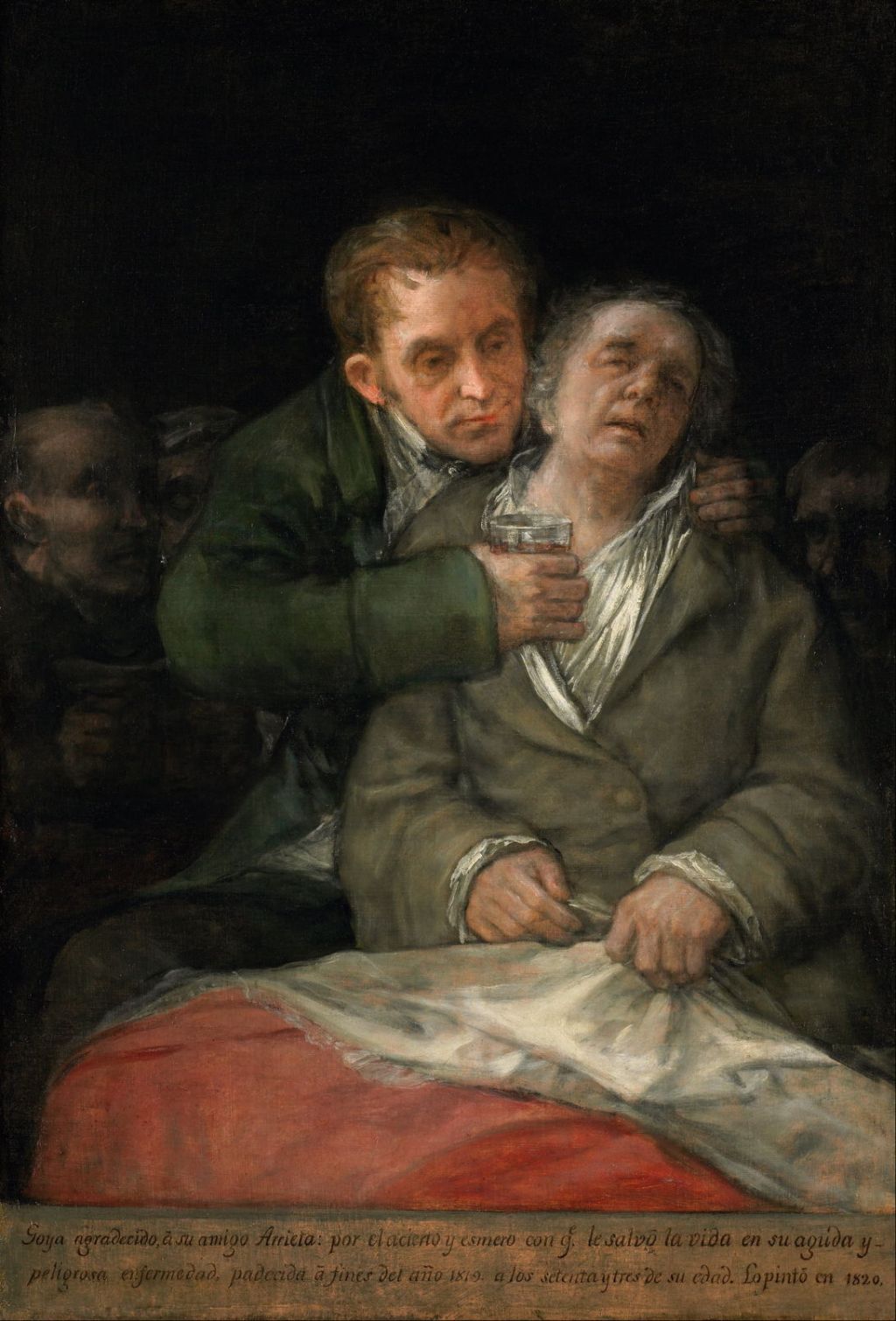 The first article on the Black Paintings of Francisco Goya (1746–1828) showed seven of the images which he painted in oils on the plaster walls of his villa Quinta del Sordo, just outside the city of Madrid. This article shows the remaining seven, together with two other paintings from the same period, between 1820-24.

These images follow on from Goya’s earlier painting of aged and decrepit majas, and adopt the theme of the tragedy of old age.

Man Mocked by Two Women shows a man with a disfigured face being mocked by two women.

Goya’s caricature of Two Old Men Eating Soup is another scene from the nightmare expressed in these paintings.

Fight with Cudgels marks a change of theme, to that of the futile, injurious struggle between two younger men. This may have referred to the growing chaos in Spanish politics and society at the time.

Men Reading shows half a dozen men gathered around what appears to be a newspaper or papers rather than a book. It has been speculated that these are intended to represent politicians reading about themselves.

Goya’s portrait of Manola (La Leocadia) is the least nightmarish of his Black Paintings, and is thought to show Leocadia Weiss, his thirty-two year-old housekeeper who was almost certainly his partner over these final years of his life. She is leaning against a tomb, perhaps symbolising life alongside the forthcoming death of the artist.

Of all these Black Paintings, it’s The Dog which is perhaps the most artistically radical. It shows the head of a dog gazing upwards from behind a darker sloping foreground. There are suggestions of another image in the right half of the painting, but that’s now thought to have been the remains of earlier marks on the plaster.

Goya’s severe illness at the end of 1819 had almost killed him. It was only through the care of his doctor, Eugenio García Arrieta, that he survived. Once he was well enough, Goya painted his Self-portrait with Dr Arrieta (1820), which he presented to the doctor in gratitude.

The Repentant Saint Peter from about 1820-24 is one of a pair, the other showing Saint Paul, which Goya appears to have painted during the same period, this time on canvas. The saint’s look says it all.

In 1823, records indicate that Goya accommodated liberal friends in his villa, who seem to have used it as a safe house from the dangers in Madrid. By the Spring of 1824, Goya had put all his affairs in order, and left Madrid on six months leave to take the waters at Plombières-les-Bains in France. Records from there show that he travelled on to Paris, where he was joined by Leocadia Weiss and her two children. Her husband remained in Madrid.