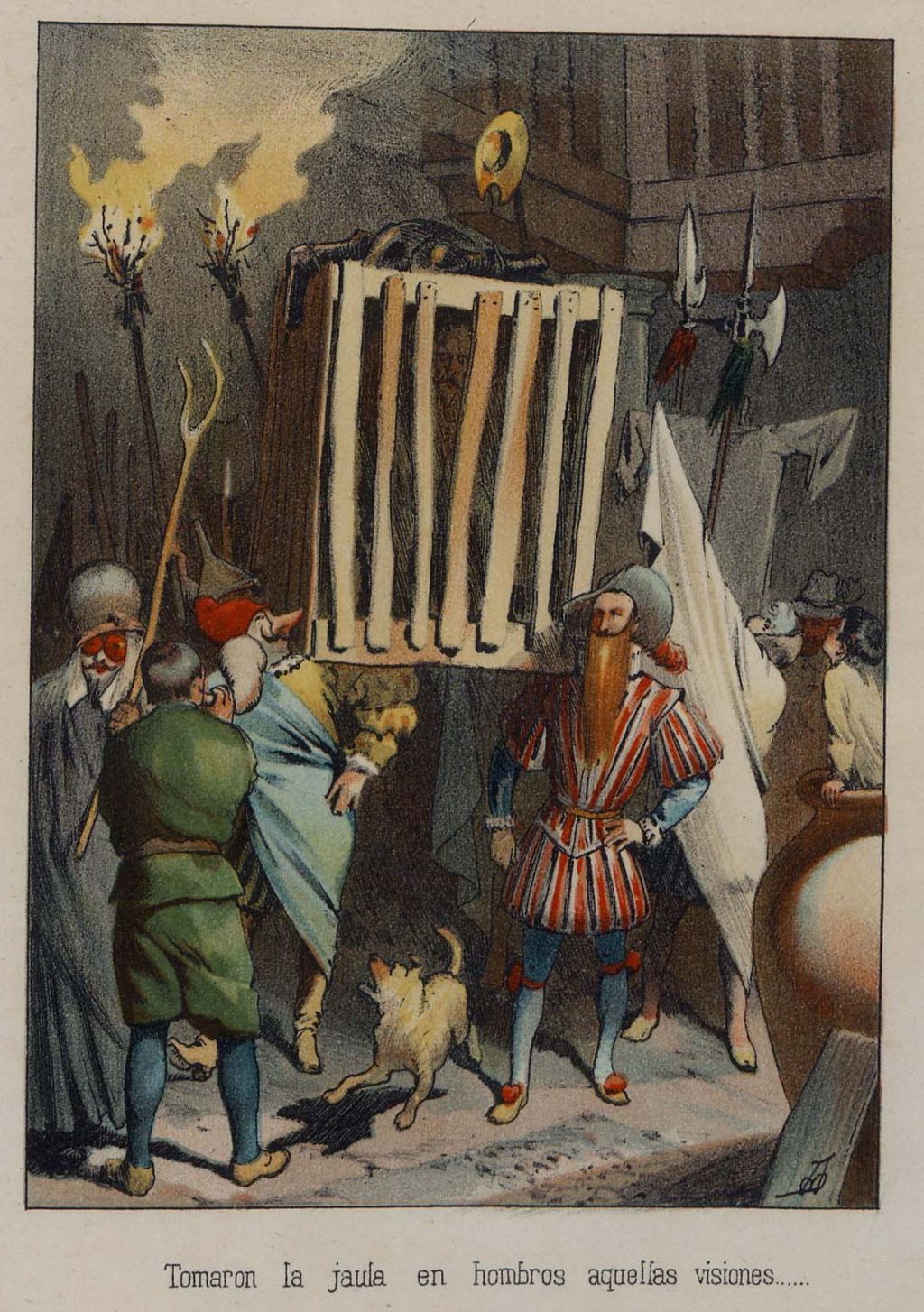 In the previous episode, those staying at the inn had been awoken by the singing of one of the judge’s footmen Luis, who was in love with the judge’s young daughter Clara. The innkeeper’s daughter and her servant played a trick on Don Quixote which left him hanging by one of his arms until he was released. By then, four horsemen had arrived to take the footman back to his noble parents, who lived near the judge. Amid general chaos, Cardenio and the judge tried to find a solution to the problem of Luis and Clara. Guests then arrived, one of whom was the barber from whom Don Quixote had acquired a brass basin which the knight insisted was Mambrino’s helmet, and a pack-saddle for Sancho Panza’s donkey. The barber demanded their theft was restored.

Don Quixote and the barber whose brass basin was being touted as Mambrino’s helmet staked their claims. Then the barber from the knight’s village gave his expert opinion that the object in question was part of a knight’s helmet. The priest put in his word of support, driving the barber who claimed it was his basin to express disbelief and change the subject to the pack-saddle. Fernando announced that he’d put these claims to a vote of those present, and discussion broke into disarray. Three officers of the Holy Brotherhood had arrived, and they got involved, only worsening the chaos.

Sancho punched the barber, Luis punched one of the servants who was trying to take him back home, and Fernando was trampling on one of the officers of the Holy Brotherhood. Above this mêlée and din, Don Quixote suddenly shouted loudly for everyone to stay still, which they did, before he launched into another eccentric speech about the haunted castle. Gradually order returned, leaving the pack-saddle still in dispute, the brass basin as a knight’s helmet, and the inn as a haunted castle.

Fernando proposed to the servants who had come for Luis that he take him to his brother in Andalusia. Three of them were to return to inform the lad’s father, while the fourth would remain by Luis’s side. Learning of Fernando’s high rank, the peace-officers backed off, although one then realised they had a warrant for the arrest of Don Quixote for freeing the chain-gang of convicts, as Sancho Panza had feared. One of them struggled to read that warrant, learned that it was for Don Quixote, so grasped the knight by his collar and announced the arrest.

The knight responded by grabbing the officer by the throat, and within a few seconds order had again collapsed into fighting and mayhem. Fernando separated Don Quixote from the officer, but couldn’t stop their call for the knight’s arrest. Don Quixote dealt with this by making a speech in which he defended the knight’s exemption from the law.

During that, the priest explained to the officers that the man was mad, and there was no point in pursuing his arrest, as he’d only be released on grounds of his madness, and in any case wasn’t going to allow anyone to arrest him. That they accepted, and mediated between Sancho Panza and the aggrieved barber; the pack-saddle changed hands again, while the rest of the tack which had been acquired was overlooked, and the priest compensated the barber for his lost basin.

With that, the situation with young Luis was agreed with the servants who had come to collect him, which made Clara happy again. The innkeeper seized the opportunity to ask the priest to pay for Don Quixote’s accommodation and his lost wineskins and wine. It was Fernando who settled that bill, and peace was finally restored to the inn.

Don Quixote next proposed to Dorotea that the party moved on from that inn to find Princess Micomicona’s giant. She played along, and agreed, allowing the knight to direct his squire to saddle their mounts and prepare to depart. But Sancho Panza felt it was time to explain to his master that Dorotea wasn’t the princess he thought her to be. In doing so, Sancho became brazenly critical, even referring to whores. His master exploded with wrath, and told his squire to get out of his sight. This struck terror into Sancho’s heart.

Once again, Dorotea persuaded Don Quixote to calm down and forgive Sancho, who was brought back by the priest for the two to make their peace. After that, Don Quixote went to rest after his exertions.

This left the group with the problem of persuading Don Quixote to return to his village to have his madness treated at home. To that end, they asked a man with an ox cart who was travelling in that direction to convey the knight, and made a cage to go onto the cart. The priest directed those at the inn to don masks and disguises and bind the sleeping knight hand and foot so that when he awoke, he’d be helpless and convinced they were part of the castle’s enchantment.

Don Quixote awoke and their plan worked perfectly, allowing them to carry the knight away in complete silence and without any fuss or protest to confine him in the cage. The village barber provided a fantasy prophecy to accompany this, telling of the lion of La Mancha and the white dove of El Toboso, which comforted Don Quixote with its promise of his marriage to the lady Dulcinea. After the knight responded, they fixed the cage containing the bound knight onto the cart.

That completes the forty-sixth chapter of the first book of Don Quixote.