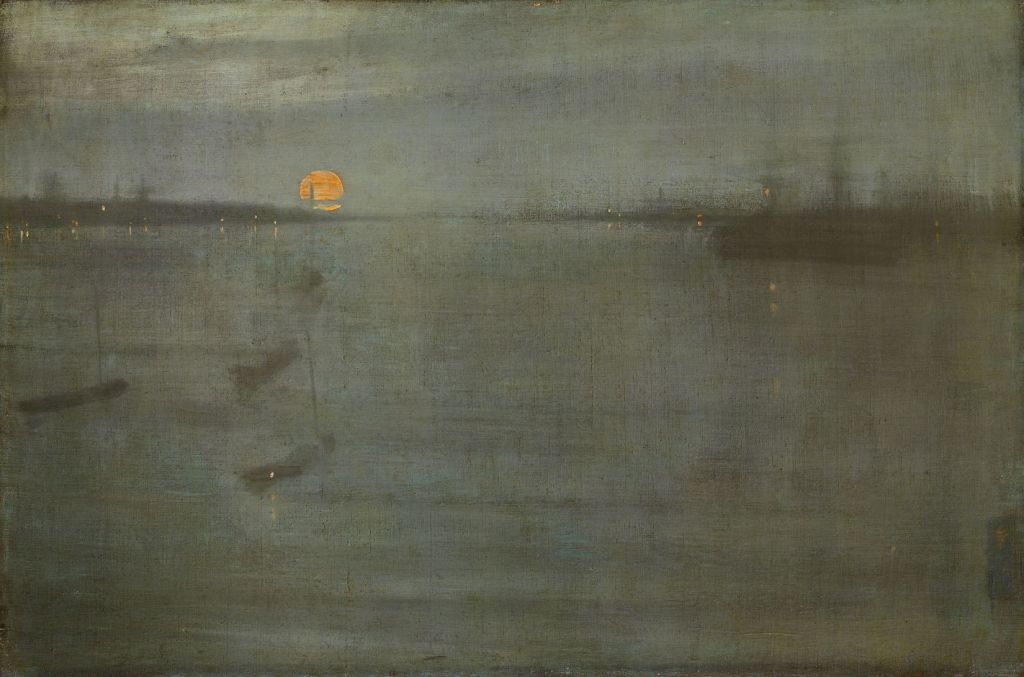 The history of British Impressionism, such as it is, normally starts in the 1880s, when Whistler, Sickert and others overtly declared their direction. In this series, I start by looking at the landscape paintings of James Abbott McNeill Whistler (1834-1903) from about the time that he came to London from Paris, a period rather less explored.

While Whistler was to paint better-known shops in Chelsea nearly thirty years later, this watercolour of a Butcher’s Shop from 1858 is small and loose enough to be seen as a plein air sketch. Unlike most of the oil paintings which he made in his studio, its washes are light and bright.

Two years later, he painted The Thames in Ice (1860) in oils, its monochrome relieved only by earth browns. It’s thoroughly painterly, and its details appear to have been sketched in quickly, suggesting that it too may have been painted in front of the motif. However, it’s a relatively large canvas, and Whistler is known to have painted from memory in the studio; he also preferred painting oils alla prima (au premier coup).

Painting from memory is a technique which became popular in Victorian England, with several books published claiming to reveal the secrets of the technique, and numerous teachers available. Whistler was proud of his ability to paint from memory, something which he later told Walter Sickert when he was working as his assistant.

He was also an early enthusiast for Japonisme. His Variations in Flesh Colour and Green — The Balcony, painted in oils between 1864-79, is Japanese in its lower half, but the dull grey buildings in the background are warehouses and factories on the bank of the River Thames in London. The detail below shows just how rough his facture is, even the faces of the women being very gestural.

When Whistler returned to France, he often chose to paint motifs which a decade or so later were to enter the Impressionist repertoire. His Crepuscule in Opal: Trouville, painted during a visit to the Normandy coast in 1865, is one of many views of beaches which he made.

Apparently, during the winter of 1872, Whistler was on the long broad estuary which connects the port of Southampton to the Solent, and painted that in his Nocturne: Blue and Gold — Southampton Water (1872). By an interesting coincidence, that was the same year that Claude Monet painted his famous view of dawn in the French port of Dieppe, which later gave the Impressionists their name, Impression, Sunrise (below). Although Whistler is more constrained in his use of colour, there’s a great deal of common ground in these two paintings.

That was an important year for Whistler, as it was when he first read Hermann von Helmholtz’s writings on the physiology of vision in English translation. Von Helmholtz was read avidly by the Impressionists, and formed the basis for Divisionism and colour theory in the late nineteenth century.

Two years later, in 1874, Whistler turned down the invitation to exhibit his paintings at the First Impressionist Exhibition – where Monet’s Impression, Sunrise was first seen by the public.

While Whistler’s oil paintings continued to concentrate on the muted if not dull colours of low light conditions, pastels such as this view of part of Battersea Bridge, which he painted in 1872-73, are much higher in chroma.

Contrast that with his Nocturne: Blue and Silver — Bognor from the period 1871-76. This might appear to be a small pochade sketch made in front of the motif, but its canvas is considerably larger and may well not have been started until the artist was back in the studio.

In the 1880s, Whistler did paint more small outdoor views on panels, such as Harmony in Blue and Pearl: The Sands, Dieppe from about 1885. This is similar in size to equivalents painted by the Macchiaioli, and the Australian Impressionists, who called them ‘nine by fives’ as those were their dimensions in inches. Whistler’s panel here is slightly larger, 14 by 23 cm, compared with the Australian cigar-box lid of 13 by 23 cm. They’re also very similar to the croquetons used extensively for oil sketches by Georges Seurat.

I finish this brief selection as it started, with a small watercolour which may have been a plein air sketch, here Green and Silver: Beaulieu, Touraine (1888). By this time, the British Impressionists had started to organise themselves, and exhibit together. I think the paintings above demonstrate how Whistler was there first, and in some respects led where the French Impressionists followed.