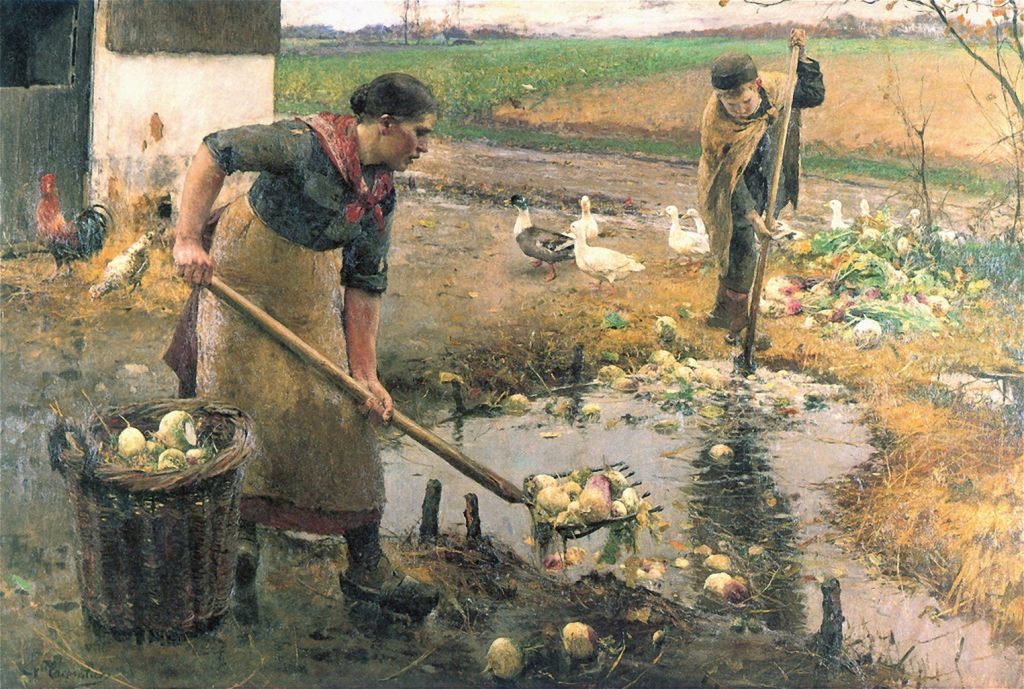 In yesterday’s article I showed paintings of farmyards prior to about 1880, culminating with the work of some the less well-known French Impressionists. Today I start with Naturalists, contemporaries of the Impressionists whose paintings met with far greater acclaim at the time, but somehow seem to have been written out of art history.

The Harvesters’ Pay, from 1882, is an unusual take on both the harvest and the farmyard. Although there are a couple of cut sheaves of wheat at the lower right, it concentrates on their economic and social roles. Four of the harvesters, bearing their heavy-duty scythes, await payment by the farmer’s factor, who holds a bag of coins for the purpose.

In the centre of the painting, one of the workers is counting out his pay in front of his wife, who is feeding a young infant at her breast. To their left, another worker just sits and stares blankly into the distance, dead-beat tired and wondering whether his pittance was worth all that effort. Otherwise this farmyard is deserted, with not a chicken or cat in sight.

Jendrassik Jenö’s undated Little Goose Girl is more optimistic despite the obvious ennui on the face of his young subject. This farmyard is full of geese and their goslings, and at the right edge of the canvas there’s a glimpse of the farmer out in his cart.

The future of the yard looks even brighter in Évariste Carpentier’s undated Eating in the Farmyard. Although an example of the rural deprivation which sparked Naturalist art, these two kids are surrounded by animals and birds in this much-used space.

Friedrich Eckenfelder’s Zollernschloss, Balingen from about 1884-5 shows a small yard just below the back of this castellated farm in Germany, with its lively flock of chickens.

Carpentier later shows the farmyard as a place of work, in The Turnip Washer from 1890. Alongside the farmyard birds, two figures are busy washing piles of turnips in a small and dirty pond. This painting won Carpentier a medal when it was exhibited in Paris.

In the last of these paintings by Carpentier, an old woman is busy Feeding the Chickens.

Lhermitte’s Goose Girl of Mézy, from 1892, follows the model set by Jules Bastien-Lepage’s waifs and strays. She stands sullen and sultry, defending her small flock of geese as she gleans for wheat left by the farmyard after the harvest. Her pinafore seems to have been handed down through the generations, and with its gaping holes is a shadow of its former self. But the last thing that she seeks is your pity or charitable handouts.

Meanwhile, high in the Swiss countryside Giovanni Segantini has found a young woman taking a short nap on the grass beside this farmyard, in his Rest in the Shade from 1892.

Early in the twentieth century the farmyard started to undergo irrevocable change. During the latter half of the nineteenth century, farm machinery powered by steam engines had become steadily more common, the use of oxen had fallen, and even horses were now under threat from newer self-powered tractors.

In 1902, Hans Andersen Brendekilde painted this rather sentimental rustic scene of Two Girls with Needlework Sitting in a Farmyard. These girls are a far cry from the subjects of earlier Naturalist paintings, being clean, well-dressed, and engaged on light domestic tasks typical of the middle class. In the distance is a cat, the only other living creature in this farmyard.

The children in Brendekilde’s 1906 painting of Soap-bubbles are more down to earth, although engaged in an activity which had become something of a cliché since John Everett Millais’ famous and sentimental painting of exactly twenty years earlier. These children are different, as is the cat. The only signs of other animals emerge from the stable at the far right.

After the Great War, the land and its farms changed dramatically. With so many men dead, mechanisation proceeded apace. Ford introduced the first mass-produced tractor in 1917, and by the early 1930s petrol/gasoline tractors were common across much of Europe. Farmyards were no longer populated by animals, but collected machinery in various states of disrepair. Their earth and mud was steadily replaced with concrete.

Of the landscape artists between the wars, it was probably the New Zealander Frances Hodgkins who took greatest interest in what was happening in farmyards. Her Cheviot Farm (1938-1940) shows an interesting collection of objects of different forms in a farmyard, apparently in the Cheviot Hills, spanning Northumbria and the southernmost part of Scotland.

In 1942, when Hodgkins was living at the other end of the country, at Corfe Castle in Dorset, she painted this gouache of Broken Tractor showing the results of the transformation. There isn’t even a cat to be seen now, just mechanical disarray.