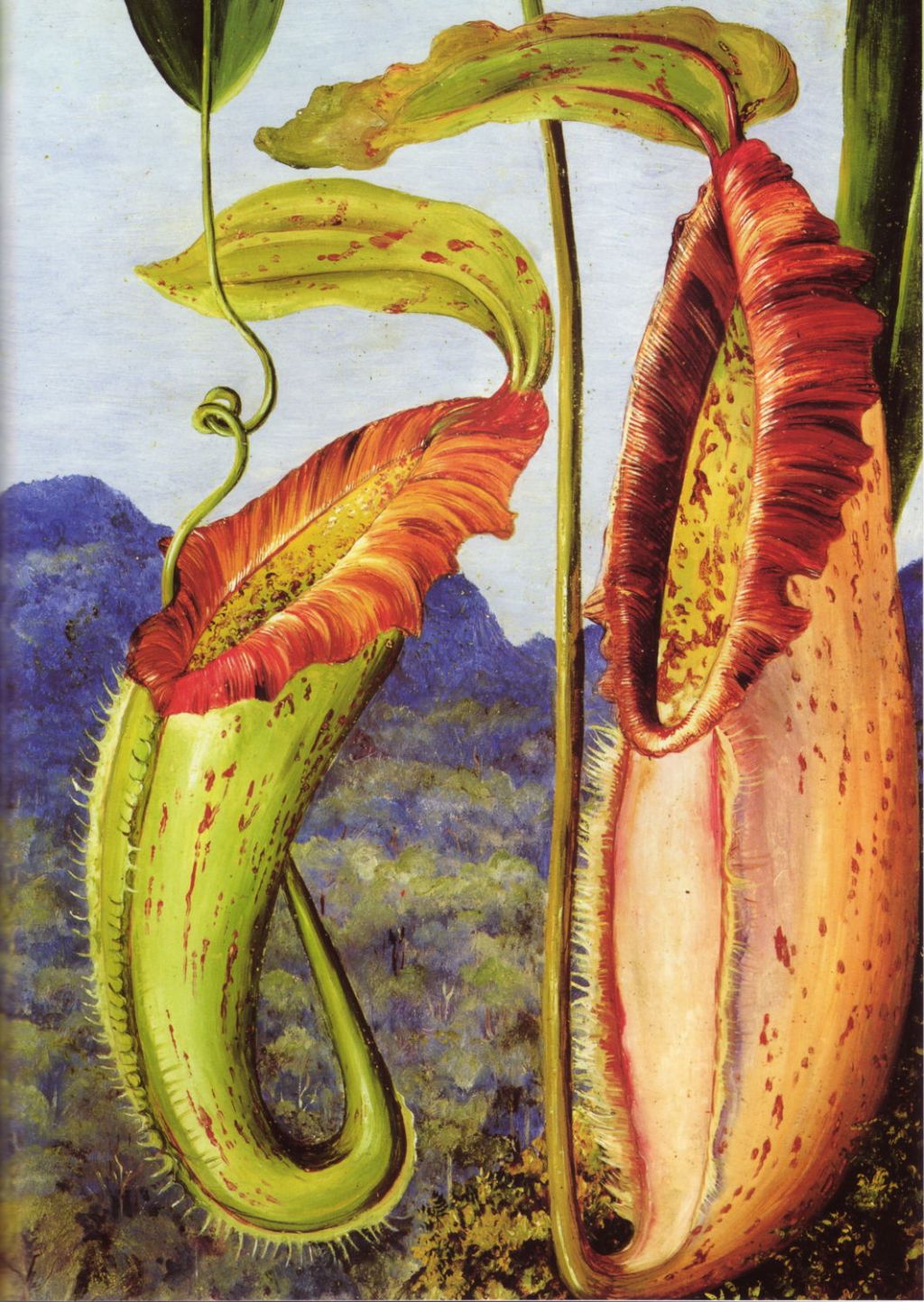 Few of the explorers and travellers that I have covered in this series have attracted the attention which their paintings deserve, so it’s refreshing to come across one who has: Marianne North (1830-1890), recognised as one of the foremost botanical artists, with her own gallery at the Royal Botanic Gardens, Kew, just on the outskirts of London.

She became a botanical artist out of personal tragedy. Born into landed gentry in Hastings, England, she trained as a singer until her voice failed, which first took her to painting flowers. After her mother died in 1855, she travelled as companion to her father, a prominent member of parliament. When he died in 1869, she decided to devote her life to travelling the world and painting its flora. Initially, she appears to have worked mainly in watercolour, but started to learn oils in 1867, and by the time that her visits extended beyond Europe, in the early 1870s, she had developed a lucid realist style.

Her first expeditions took her to Canada, the US and Jamaica. She met the great American landscape artist Frederic Edwin Church, and he encouraged her to journey to South America and paint there.

She painted this Distant View of Newcastle, Jamaica in about 1872, when she was renting a house in the old Botanic Gardens in Jamaica. Newcastle was a military hill station in the Blue Mountains, inland in the east of the island. In 1992, this area was turned into a National Park.

Following Church’s recommendation, North stayed in Brazil for a year.

View of the Old Gold Works from the Verandah at Morro Velho, Brazil (c 1873) shows an active gold mining area in the south-east of the country.

In 1875, she visited Tenerife, where she decided to travel the world. She first went to the USA, where she spent some time in California in particular.

A View of Lake Tahoe and Nevada Mountains, California (1875) shows this freshwater lake in the Sierra Nevada, on the eastern edge of the state of California.

The Calaveras Grove of the Big Tree or Wellingtonia, in the Evening (1875) shows what was already a popular tourist spot, to the south-west of Lake Tahoe, in the Sierra Nevada. In 1853 one of these grand sequoia trees had been felled, to public outcry. The following year, another had its bark removed for public exhibitions, which killed it by 1861.

From the West Coast, North seems to have crossed the Pacific to Japan.

Despite their title, it’s thought that North painted these Japanese Chrysanthemums (1876) away from the country.

This painting shows the Entrance to the Temple at Kobe, Japan (c 1876).

When she visited Japan, North adapted her style, as shown in this Distant View of Mount Fujiyama, Japan, and Wistaria from about 1876.

From Japan, she travelled south to the Indonesian Archipelago. She travelled alone, and without any interest in luxury. She was no stranger to hardship: so long as she could put up her easel and paint, she seemed happy however spartan her living conditions.

This shows The Volcanoes of Merapi and Merbaboe, Java, from the Top of Boro Bodoer (c 1876).

Mouth of the Kuching River, Sarawak, Borneo from 1876 continues to show Japanese influence.

North painted this View down the River at Sarawak, Borneo in 1876.

A New Pitcher Plant from the Limestone Mountains of Sarawak, Borneo (c 1876) shows what is named in North’s honour, the species Nepenthes northiana.

At this time, the island town of Singapore Harbour was small, and this View in Singapore with Nyum-Nyum Tree from 1876 shows undeveloped forest. Singapore had been founded as a trading post in 1819, and by the time of this painting had a population over 100,000. When the rubber industry was established in the last decade of the century its growth accelerated and much of this wild forest was cleared.