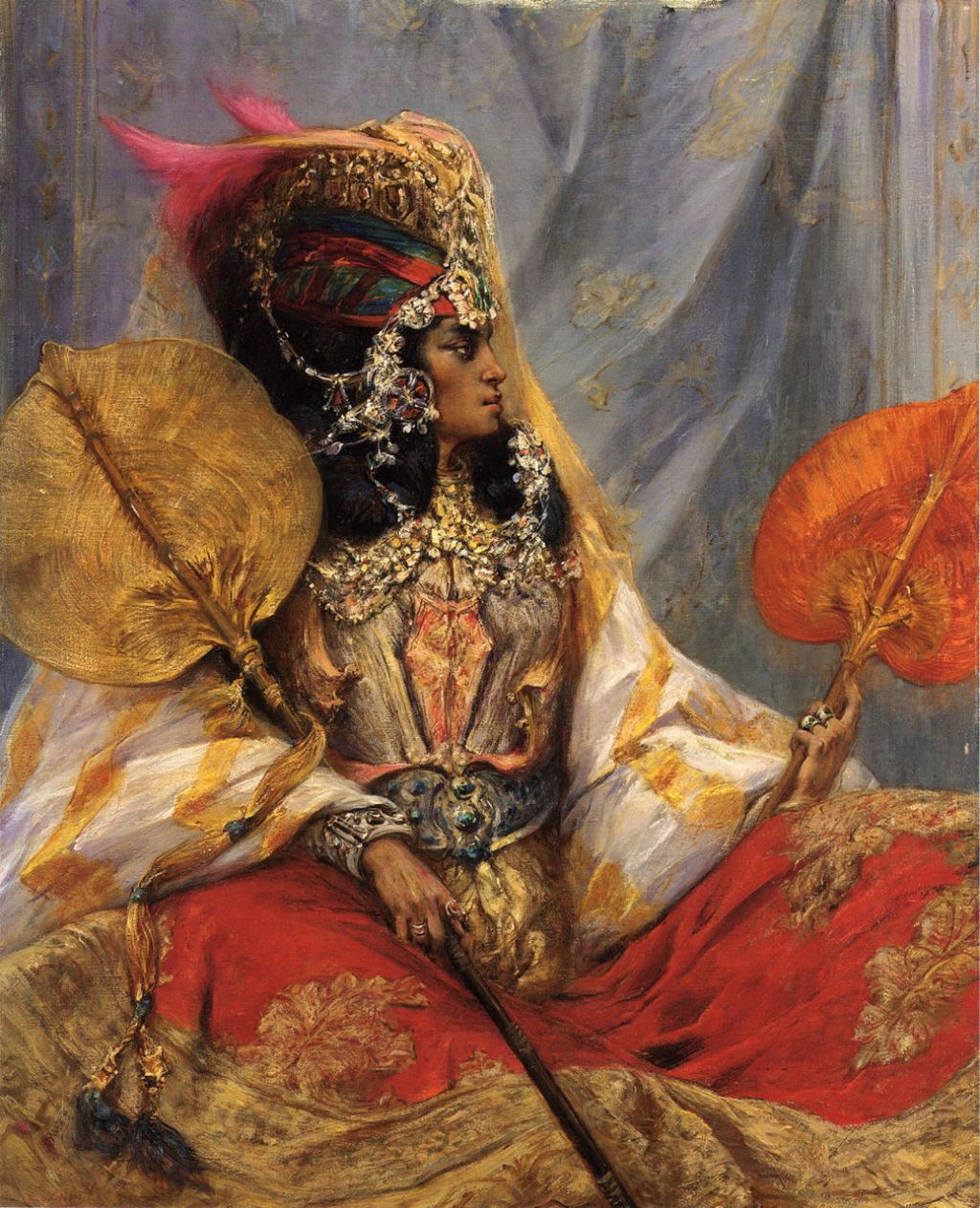 Even today, the world looks to Paris for the height of fashion in clothing, a phenomenon which was well-established by the late nineteenth century. This of course included hats, and in this second article on paintings of hats, I show a selection of works illustrating fashionable headwear of that period. These are the works of just five painters who seem, in one way or another, to have specialised in fashionable women’s headwear: Jules Victor Clairin, Jean Béraud, Pierre-Georges Jeanniot, Henri Gervex and Edgar Degas.

Jules Victor Clairin’s undated Elegant Couple at the Coast comes not from the Rococco, but as indicated by the very painterly style of the slippery rocks, was most probably painted in the early years of the twentieth century. It’s a study of one of the few disadvantages of hats, particularly extensive fashionable adornments, in their behaviour in wind. The very pink young ‘galante’ woman is a textbook example of how to make a figure look windswept, although her partner seems mysteriously to be unaffected by the breeze.

The English word for specialists in fashionable hats for women, milliner, comes from that for an inhabitant of Milan, one of the former centres of the hat trade in Europe. Milliners and their shops were associated with the height of fashion, and drew the attention of Edgar Degas and others.

Edgar Degas looked carefully at one of the delights of the middle and upper class modern woman, the selection of hats in The Millinery Shop (1879/86). Here he also experiments with unusual views and cropping, as he examines the tricky process of assessing and choosing a hat.

Around this fashionably-dressed Milliner on the Champs Elysées (date not known), Jean Béraud carefully balances painterly background foliage and sky, and the atmospheric detail of distant carriages. His Milliner on the Pont des Arts from 1879-82 (below) shows the same model drawing admiring looks on a windy day by the River Seine.

Pierre-Georges Jeanniot’s At the Milliner (1901) contrasts with those of Degas in its relatively fine detail, and Jeanniot’s use of mirror play to show the milliner herself, at the right. His swirling hats, and the huge ginger cat, are marvellous.

Millinery was one of the staples of fashion houses like that of Paquin, whose success was characteristic of the late nineteenth century, and shown in Henri Gervex’s Five Hours at Paquin’s from 1906.

The purpose of these expensive hand-made hats was for show, when the lady was seen in appropriate surroundings. Jeanniot’s painting of the patrons of one of the most fashionable hotels in Paris shows all the hats out on parade in the fine weather (below) in the inner garden of the Paris Ritz.

Others captured the role of hats to those heading downward through society.

Béraud’s The Letter (1908) offers a glimpse into the café culture of the years prior to the First World War. The man looks rough, and is unshaven, although the woman is elegantly dressed, and apparently engaged in writing a letter. In front of each of them is a glass of absinthe, notorious for the severe forms of alcoholism with which it was associated. His battered old brown bowler hat suggests a working past before he succumbed to the absinthe.

Absinthe Drinkers from 1908, also by Béraud, shows a similar scene, with the man adding water to his glass, which turns the pale yellow absinthe cloudy. The woman this time stares vacantly at the viewer, her hat telling of better days past.

Although I’ve concentrated almost exclusively on hats seen in Europe on the head of Europeans, the nineteenth century was also a time when hats from overseas were becoming more frequent sights.

Georges Clairin’s paintings of Ouled Naïl women provide glimpses of those from this nomadic group from the foothills of the Atlas Mountains. Exotic they certainly are, with elaborate headwear, richly-decorated clothing, and no doubt over their identity.

Of all the artists of this period, it was Clairin who appears to have been most fascinated by hats.

His extraordinary Bust of a Woman in Profile (1899) is perhaps a sea-nymph, wearing the most bizarre headgear which appears to have grown from coral. It has peculiar pedicles which sweep over her hair, and excrescences which look like the bodies of fabulous birds.

Which makes it the ultimate hat of them all.