Many users have been reporting problems with spontaneous disconnection and reconnection of Bluetooth devices, particularly mice, trackpads and keyboards. This article suggests some tools which you may find useful when trying to identify the cause.

It’s easy to make the assumption that such problems are caused by your Mac, or are bugs in macOS. While that might be true, until you’ve ruled out all other causes, or caught it red-handed, you could easily be wrong, and there could be a simple fix. One good first step is to run hardware Diagnostics to confirm that it can’t detect any problem in your Mac’s hardware.

You should also check the Bluetooth device which keeps being disconnected. I was once asked by a Mac user why their Magic Trackpad 2 had apparently died, only to discover that they had never recharged it at all, and its battery was simply flat. Once I had explained the purpose of the USB cable that came with their trackpad, they recharged it and it worked.

When you’re happy that both ends of the hardware connection should work fine, check that the signal is good, constant, and not subject to radio interference. Even if you’re a radio ham (as I am) and have all the gear to look for causes of interference, nothing beats being able to monitor the Bluetooth signal itself.

I’ve looked at three apps for checking Bluetooth signals: the freeware Bluetooth Inspector from the App Store, iStumbler, which will cost you a little more than $/€/£10 from the App Store and is best known for its Wi-Fi features, and Apple’s free Bluetooth Explorer. The last is an old app bundled in the Additional Tools for Xcode 11.4, but has been dropped from those in version 12 and later. I’ve been unable to find any source for the old version which is accessible to ordinary users, although developers can download it for free. There is an app of the same name in the App Store, which is quite different and looks worth avoiding anyway.

Bluetooth Inspector works quite well on both Intel and M1 Macs running Big Sur, but doesn’t give any information about connected Apple trackpads or keyboards, so isn’t suitable for this task, I’m afraid.

In iStumbler, setting its viee to Bluetooth displays useful information about both trackpads and keyboards, which includes both signal strength and a real-time display of signal-to-noise ratio for each connected device. Although better than nothing, I doubt whether this will be of much help in trying to eliminate spikes of radio interference, although it should reveal any marginal connections. 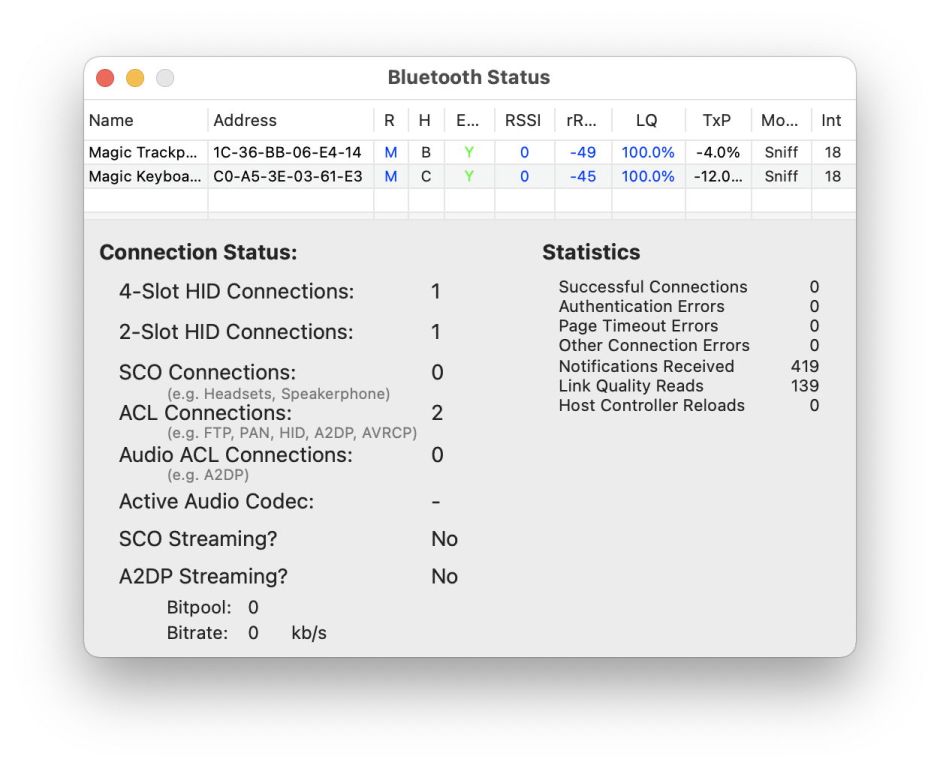 Despite claims that it doesn’t work on Intel Macs running Big Sur, let alone M1 models, I found Apple’s Bluetooth Explorer worked well on both. Its main window shows Bluetooth Status, which includes RSSI (Received Signal Strength Indicator) and LQ (quality of signal reception). There are also some basic figures for each connection.

In this context, its most useful window is for Connection Quality, with four different charts to give you excellent and frequent readings.

Also of value is its Event Log window, which should reveal any software glitches too.

If everything looks healthy in Bluetooth Explorer, you should next look at a disconnect-connect event in your Mac’s unified log. Unless those events are happening every few seconds, the only sensible way to do this is using my own free log browser Ulbow. Please consult its ReadMeFirst file and follow the instructions for first time use, as you will need to set its preferences first, as explained there and in this introductory tutorial.

I wish you success.