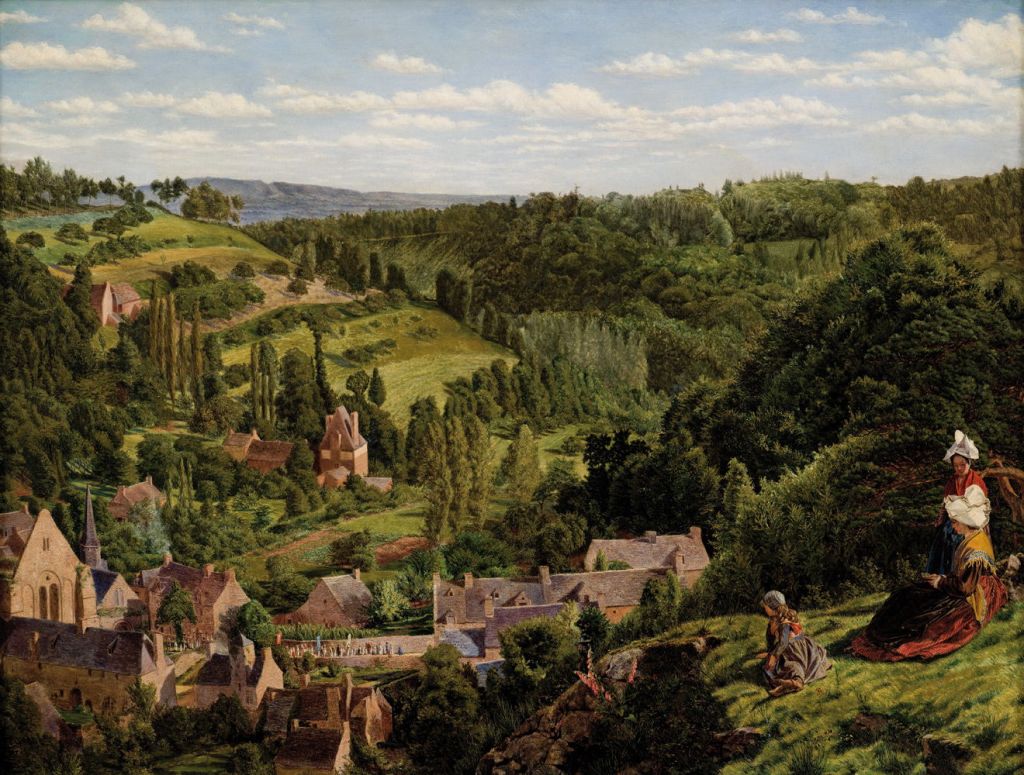 This year has no anniversaries of the births or deaths of major painters which compare with last year, but there’s a steady succession of those who are less well-known than they deserve. Here’s a preview of those whom I intend covering in articles or series over the coming year.

3 February 1921, death of William Strang, a Scottish painter and printmaker who was born in 1859. Known mainly for his etchings, he also painted figurative works and some landscapes.

4 February 1921, death of Eugène Burnand, a Swiss painter who was born in 1850. Although largely forgotten today, he was successful in both France and Switzerland with landscape and genre works, and appears to have been prolific.

11 February 1921, death of Sir William Blake Richmond, an English portrait painter and designer who was born in 1842. He specialised in designing stained glass windows, and was an influential figure in the Arts and Crafts movement. He succeeded John Ruskin as Slade Professor at Oxford.

21 February 1921, death of George Dunlop Leslie, an English genre painter who was born in 1835. He was a member of the St John’s Wood Clique, and influenced by the Pre-Raphaelites.

2 March 1921, death of Johann Friedrich Engel, a German-American painter who was born in 1844. He painted portraits and genre scenes in realist style.

23 March 1921, death of Jean-Paul Laurens, a major French history painter and sculptor who was born in 1838. Although he painted in academic style, many of his works tell fascinating stories.

One of the most extraordinary paintings of extraordinary history is Laurens’ Pope Formosus and Stephen VI, which attempts to depict with great accuracy the climax of what became known as the Cadaver Synod. This occurred almost a millenium before this was painted in 1870. The rotting corpse seated in the throne here is Pope Formosus, who was first succeeded by Boniface VI, then by Stephen VI (or VII!). It was Stephen who sought to annul the acts of Formosus, so in 897 he had him tried posthumously before an ecclesiastical court in the Basilica of Saint John Lateran in Rome. Stephen accused Formosus of perjury and having succeeded to the papacy illegally.

Inevitably Formosus’ corpse was unable to defend the case effectively, and Pope Stephen had it pronounced guilty, then ordered that Formosus’ papacy was declared null and void, and his acts invalid. The latter was strange, as they had included ordination of Stephen as a bishop. Eventually the body of Formosus, which had been propped up in his papal vestments in the court, was mutilated and dumped in the River Tiber.

The body of Formosus then apparently washed up on the bank, and promptly started to perform miracles. After a public uprising, Stephen was deposed and imprisoned, then strangled whilst in jail. At the end of the year, his successor Pope Theodore II held another synod which annulled the Cadaver Synod, and rehabilitated Formosus. Finally the successor Pope Sergius III, who had taken part in the Cadaver Synod, reversed the decision again, and reaffirmed the posthumous conviction of Formosus.

Laurens shows this bizarre trial in progress. The rotting corpse of Formosus has been dressed in his papal finery and propped up in a throne. A thurible placed in the foreground burns incense to control the smell. Pope Stephen (presumably) stands pointing at the body of Formosus as a witness is being examined, in front of the synod of bishops.

It was no coincidence that Laurens painted this in the year that the newly created Kingdom of Italy put an end to the Pope’s political power.

6 April 1921, death of Vardges Sureniants, an Armenian painter who was born in 1860, and founded the painting of Armenian history.

16 April 1821, birth of Ford Madox Brown, the justly famous English painter who is associated with the Pre-Raphaelite Movement, and died in 1893. Many of his paintings are memorable, and have earned him a place in the history of painting during the nineteenth century. To my mind and eye, there are three which rank among the great paintings of the period.

He painted this landscape in pure Pre-Raphaelite style, An English Autumn Afternoon, 1852-1853, during the whole month of October in 1852, from his landlady’s bedroom window in Hampstead. This intricately detailed view over Hampstead Heath to the churches of Highgate in the suburbs of London was finally completed after a further two months work in the Spring of 1854.

Madox Brown’s original version of The Last of England was probably started in 1852, and is one of his most subtle compositions. Central to his imitation of a circular tondo is a middle-class couple who are not enjoying the fact that the ship is ‘all one class’. They both stare with grim determination at the prospect of sharing the next few weeks with the rowdy working class emigrants behind them, eating the same once-fresh vegetables which are now slung from cords around the ship’s rail in front of them.

This isn’t just a couple, though: look closely at their hands, and the woman’s left hand is clutching the tiny hand of her baby, who is safely swaddled inside her weatherproof hooded travelling cape. Her right hand, wearing a black leather glove, grasps that of her husband, whose left hand is tucked under his heavy coat. Splashes of brilliant colour are supplied by the wind blowing the woman’s ribbons.

This is the Birmingham (second) version of Madox Brown’s Work, showing a crowded street scene in Heath Street, Hampstead, one of London’s ‘leafy’ suburbs at the time, in which he has crammed references to many contemporary aspects of Victorian society, including an election campaign.

At its centre is a gang of navvies, that term originating with the word navigators, usually Irish labourers, who dug the canals during the previous century. Here they’re engaged in digging up a road, probably to lay a sewer as part of the campaign to improve the hygiene of Victorian London. Inspired by the social satirical comment of William Hogarth’s many prints and paintings, Brown is effectively giving a meticulously detailed account of the breadth and depth of contemporary society.

22 April 1821, death of John Crome, an English landscape artist who was born in 1768. He was a founder of the Norwich School of landscape, an important precursor to the advances in British landscape painting during the nineteenth century, including John Constable and JMW Turner.

29 May 1921, death of Abbott Handerson Thayer, an American painter and naturalist who was born in 1849. In addition to a staple of portraits, he painted landscapes and animals. He also studied animal camouflage, and was an influence over military camouflage of the twentieth century.

18 July 1721, death of Antoine Watteau, a leading French painter who was born in 1684. Although his paintings are in Rococo style, which has little appeal to me, he was an important figure in the history of painting.

Seddon’s Léhon, from Mont Parnasse, Brittany (1853) is a startling example of an early Pre-Raphaelite landscape. In addition to painting in Brittany, he painted similarly detailed views of the Middle East. When visiting Cairo in October 1856, he contracted dysentery, and died there the following month, cutting short what should have been a brilliant career.

13 October 1821, birth of Évariste Vital Luminais, a French history painter who died in 1896. He’s best know today for his paintings of the early history of France, but also painted mythology.

Luminais’ painting of Psyche is one of the few of her which is strongly narrative. She stands, picked out in white and clutching her pyxis in both hands, being rowed across to the underworld by Charon, with a boatful of the dead. She stares straight at the viewer, an unusual and powerful pictorial choice.

1 November 1921, death of Francisco Pradilla Ortiz, a Spanish painter who was born in 1848.

After he had completed his studies in Madrid and Rome, Pradilla submitted this painting of Doña Juana “la Loca” – Juana or Joanna the Mad – in 1877, to the National Exhibition, where it was awarded the Medal of Honour. It went on to exhibit at the Exposition Universel in Paris later that year, and in Berlin.

Queen Joanna of Castile, or Juana the Mad, brought about the union of the kingdoms of Castile and Aragon, forming the basis of modern Spain. She married Philip the Handsome in 1496, shortly before her seventeenth birthday. He was crowned king of Castile in 1506, and was the first of the Habsburg monarchs in Spain.

He died suddenly later that year, probably from typhoid fever, and Juana became mentally ill, refusing to let Philip’s body be buried. It is this which is the basis for Pradilla’s painting, in which (I believe) Juana is shown in the nun’s habit which she would have worn when she was eventually secreted into a convent. When her father, Ferdinand II, died in 1516, Juana inherited Aragon, and Spain was ruled under the personal union of her son Charles I, who was also elected Holy Roman Emperor.

5 November 1921, death of Eugen Bracht, a German Impressionist and Symbolist painter who was born in 1842. Although most of his paintings are Impressionist landscapes, in 1889 he was highly successful with a unique Symbolist vision of The Shore of Oblivion.

On a remote and forbidding shore, below towering rock slabs, small waves lap on the sandy beach below snowslopes. The low sun lights the top band across the rocks, while behind is a dense and dark bank of cloud. Scattered across the beach are large numbers of bleached white objects, which on close examination prove to be human skulls, apparently washed up by the water. This is the apocalypse, all that remains of the human race, oblivion for humankind.

12 November 1921, death of Fernand Khnopff, a major Belgian Symbolist painter who was born in 1858. His paintings are invariably strangely fascinating, and well worth reading in depth. He was one of the founders of the influential group Les XX which did much to foster innovative art in the late nineteenth century.

Art, or Caresses (1896) is an extraordinary image of an androgynous youth holding an ornate caduceus (less the intertwined serpents) in his right hand, so presumably being Mercury/Hermes. His nipples appear to have been tattooed, or bear jewellery, and he is bare to the waist. He stands cheek-to-cheek with a leopard with a young woman’s head, perhaps a form of sphinx.

The background encourages even greater speculation as to its interpretation. Behind the leopard’s body is a wooden booth, which has non-Roman characters or ideograms written on it. Further in the distance to the right are two blue columns, with bases and caps of gold.

There are two artists for whom we know only the year, and not the date:
Jan Baptist Weenix, painter of the Dutch Golden Age was born in 1621, and died in 1660;
Jean Bourdichon, French miniature painter and manuscript illuminator died in 1521, and was born in 1457/1459.

I hope that you’ll join me to look at their paintings, together with those of other artists, over the coming year.