For most users with a single system installed on their internal storage, the additional complications brought by Catalina and Big Sur’s dual startup volume should be minimal, but installing multiple boot volumes can become quite confusing. If you’re not careful what you do, you could end up trashing a non-boot system volume. It’s also very easy to become lost in the file system, whether you’re accessing it from the Finder or command line. This article explains what you should expect to find, and what should be safe to do.

When accessing the file system from Big Sur, the /Volumes directory contains one entry under the System volume name for the integrated boot Volume Group, laid out as standard, but non-boot Volume Groups have separate entries for their System and Data volumes. Using [System] to represent the name of the System volume (commonly Macintosh HD), and [Data] the name of the Data volume (Macintosh HD – Data), you should see

Catalina behaves the same, unless the non-boot Volume Group has Big Sur installed, in which case it can’t mount that System volume properly.

If you want to iterate through all mounted volumes, the simplest method is to work through those in the /Volumes directory, treating the boot volume there as being an integration of both System and Data volumes, and all other volumes as individuals. However, you’ll then have to beware of other points of integration between current boot volumes, as noted below and in this article.

When browsing 10.15 and 11 Volume Groups from Big Sur, or 10.15 from Catalina, there’s one discrepancy in paths which alters depending on whether that Volume Group is that used for the current boot, or is non-boot.

On a boot Volume Group, the Finder path [System] > System > Volumes > [System] is the current Data volume, equivalent to Terminal’s /System/Volumes/Data. However, trying to follow a similar path on a non-boot Volume Group causes a problem: [System] > System > Volumes > Data is an empty folder, and Terminal gives the equivalent path as /Volumes/[System]/System/Volumes/Data.

On a dual-boot system, when you want to start up from the Big Sur Volume Group, you’ll have to select its Data volume, as the Big Sur System volume isn’t properly recognised. Switching between Big Sur and Catalina normally requires two boots, with two startup chimes, when they’re enabled. 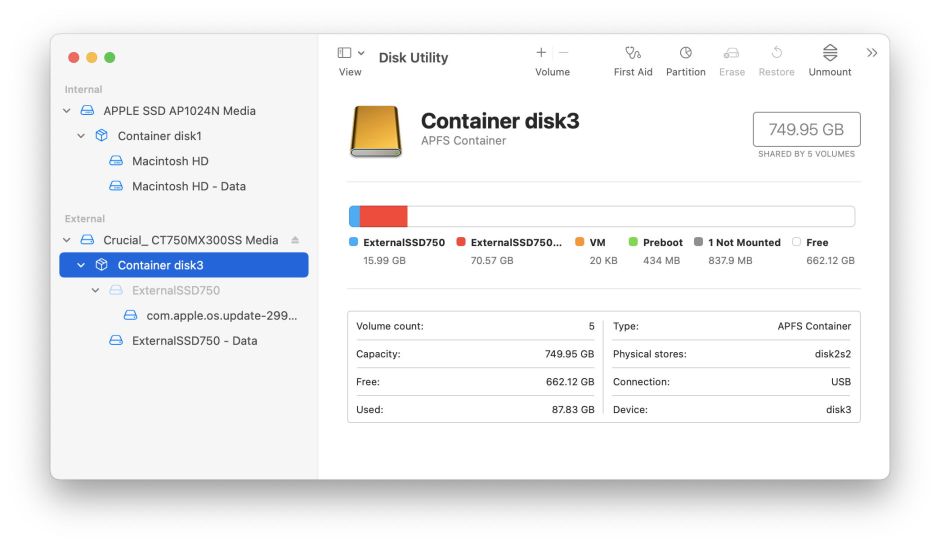 When dual-booting, you must be assiduously careful as to which copy of Disk Utility (and disk-related command tools, such as diskutil) you use. Avoid doing anything significant, like First Aid, using a copy of Disk Utility from 10.15 or earlier on a Big Sur Volume Group: it won’t understand what you’re asking it to look at, and the best you can hope for is that it’ll just give spurious errors and not try to mess with anything. If you need to modify, check or repair a Big Sur Volume Group, always use tools intended for Big Sur.

I am very grateful to Thomas Tempelmann for his knowledgeable discussions which helped me out of complete confusion.