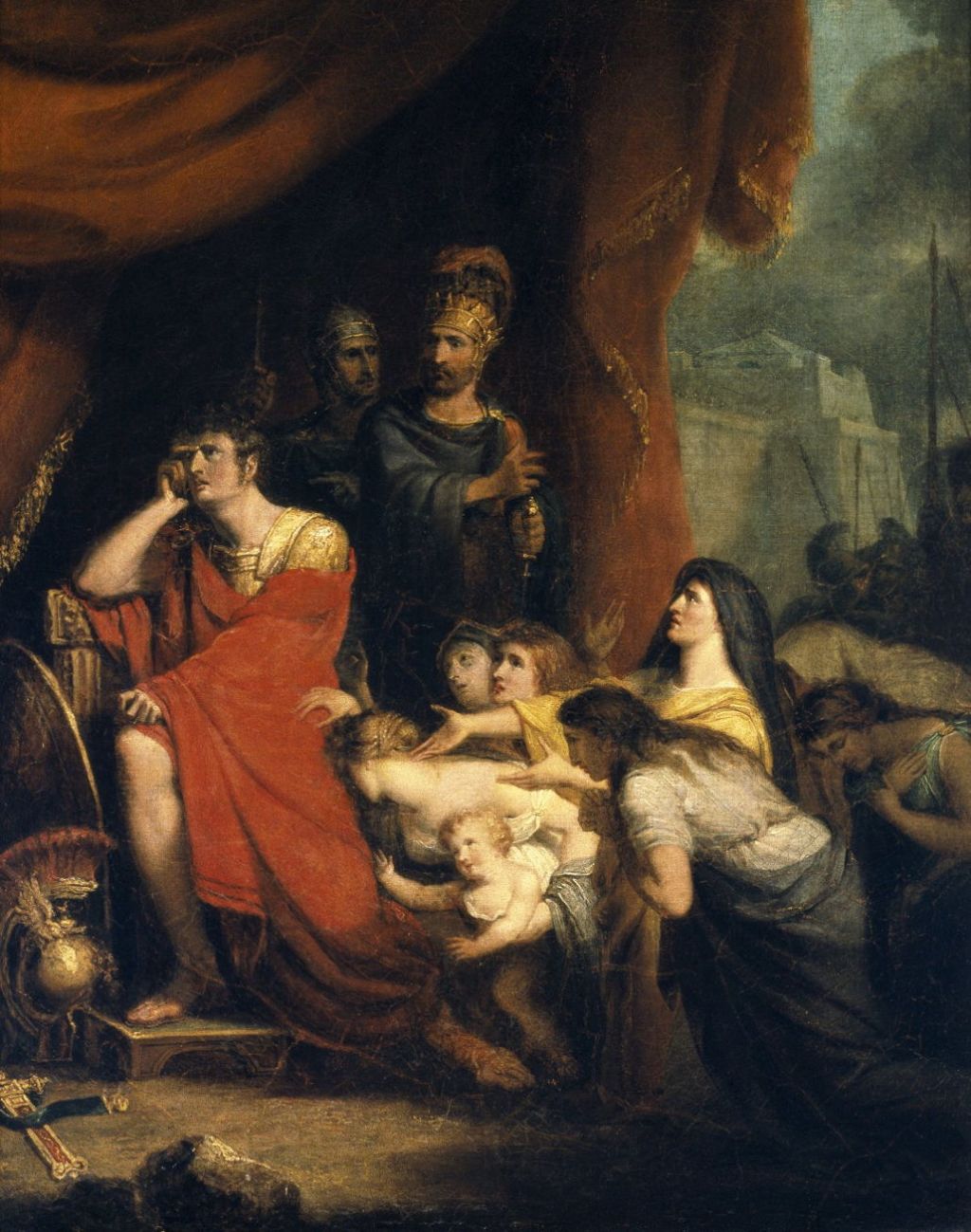 With the threat of the deposed king Tarquinius Superbus receding and the new Roman Republic formed, the city might have hoped for a period of peace. Although its consul Publicola managed to avoid direct confrontation with the Sabines, there were many internal conflicts and the problem of the Volscians. These came together in one prominent figure, Caius Marcius – a name you probably won’t recognise, but his story, as told in Plutarch’s Lives, was popularised much later in Shakespeare’s play about him, Coriolanus.

As a Marcius, he came from the noble family of the Marcii, descendants of Numa and the former king of Rome, Ancus Marcius, who had succeeded Tullus Hostilius. Others in the clan had attained fame by bringing Rome much of its supply of fresh water, but Caius Marcius is remembered for very different achievements. As a youth he served bravely in the last battle against Tarquinius, when he saved the life of a Roman soldier by killing his assailant. For that he was awarded a garland of oak leaves, the Roman equivalent of a medal of valour.

Later, when Rome went to war with the Volscians, Marcius encouraged other patricians to demonstrate their valour by rallying to the city’s call for men to fight in its army. The Romans then put the Volscian city of Corioli under siege, forcing its forces to divide between that siege, and meeting the Volscian army. The men of Corioli took advantage of this, overcame the Romans surrounding their city, and pursued them back to camp. Marcius led a small band of Romans to stop the men of Corioli, then rallied the other Roman forces to pursue their enemy back to their city, bursting into it with a small group of valiant Romans. This counter-attack took the enemy by surprise, and allowed Roman reinforcements to secure the city.

When the Roman soldiers started to plunder and pillage the city, Marcius cried out that he thought it a shame that they should concern themselves with getting booty, when other Romans could be fighting for their lives in battle nearby. He therefore led a small group of Romans out of the captured city towards the main Volscian force. He and his troops met up with the main Roman army as they were about to join battle with the Volscians, and he was granted permission to take on the fiercest of the enemy troops. In the battle which followed, Marcius again distinguished himself greatly, and it was his troops who were largely responsible for putting the Volscians to flight.

The following day, Cominius, the consul in command of the Romans, praised Marcius highly in front of the assembled army, and awarded him a tenth of the booty which had been taken, and a horse. For his part, Marcius accepted the latter, but declined to take any booty beyond his normal share. For this, Marcius was dubbed Caius Marcius Coriolanus, and became famous throughout Rome.

With the war against the Volscians settled in a truce, Rome faced famine, and dissent among its people. The citizens of Velitrae, though, had been decimated by an epidemic, and came to Rome to hand their city over and seek Roman colonisation. This too became the subject of dissent, and when the consuls called for Romans to go to Velitrae, the people refused.

Coriolanus led a volunteer force on an incursion into Antium, where they found and secured sufficient corn and other spoils to relieve the hunger in Rome. This further improved his reputation with the people, and he stood as a popular candidate in the next consular election. During his campaigning, though, the people saw that he was just another patrician: in the senate, Coriolanus strongly opposed the free distribution of grain, which had been sent as a gift from Syracuse, and would have greatly eased hunger among the ordinary people.

Matters quickly came to a head, and Coriolanus was summoned to answer to the people for his actions in the senate, which were claimed to incite civil war. Coriolanus responded by standing his ground and continuing his contempt for the people. The tribunes accordingly condemned Coriolanus to death as a traitor, and ordered him to be taken up to the Tarpeian Rock and thrown from it immediately.

When they tried to arrest him and do this, many realised what a monstrous act it would be, and he was surrounded and protected by a crowd of patricians and many plebeians too. It was then agreed with the tribunes that Coriolanus would be tried by the citizens in a little less than a month. Coriolanus recognised the difficulty that the senate had in its kindly feelings towards him and its fear of the common people, and brought the trial forward in an effort to clear his name.

The tribunes insisted at the start of his trial that votes should be cast not by ‘centuries’ (groups which divided the vote almost evenly between patricians and plebeians), but by tribes (families), which gave the plebeians a clear majority over the patricians and citizens of military class. At the end of the trial, when the vote was taken, he was found guilty by the tiny majority of three, and banished from Rome in perpetuity.

Coriolanus was probably the only patrician who kept his composure at this. He went home, where his mother and wife were in great distress at the news. He was then escorted by fellow patricians to the city gate, and left.

It is perhaps this which inspired Lawrence Alma-Tadema’s otherwise curious painting of the deserted Interior of Caius Martius’ House (1907), which he had carefully reconstructed.

After a few days in the country, Coriolanus decided to take vengeance on the Romans by inciting one of their enemies to wage war against Rome. He went to Tullus Aufidius, the leader of the Volscians, in their city of Antium, where he was welcomed and shown great kindness, and the two began to plot the war they would fight against Rome.

Meanwhile the Romans were torn apart by continuing dissension, and increasingly fearful of a series of bad portents. They should have been enjoying a two-year truce with the Volscians, but there were rumours that visiting Volscians would try to set the city alight. Tullus sent ambassadors to Rome to demand return of the territory which they had lost to the Romans, but Rome was indignant and suggested that the Volscians were manouevring to break the truce.

Coriolanus won the full support of both Tullus and the Volscians to wage war against Rome, and was appointed general alongside Tullus. They led a preliminary incursion into Roman territory, and won so much booty that they were unable to carry it all back. They then completed final preparations of the Volscian army for its campaign.

Coriolanus next took his Volscian division against the Roman colonial city of Circeii, which surrendered without any resistance. He moved on to lay waste the country of the Latins, but Rome refused to go to their aid, and Coriolanus captured their cities, enslaved their inhabitants, and plundered their property. His forces were by that time only twelve miles from the city of Rome.

The next city to which Coriolanus laid siege was Lavinium, which had been founded by Aeneas, and was still the location of the Romans’ sacred symbols of ancestral gods. At last Rome reacted: the commons proposed repealing the sentence against Coriolanus, and inviting him back to Rome, which was promptly vetoed by the senate.

Coriolanus marched against Rome, and camped just five miles from its gates, putting terror into the hearts of the Romans. Rome sent ambassadors to Coriolanus to beg him to stop the war, and to welcome him back to Rome. In front of the Volscians, Coriolanus repeated demands for Volscian territories to be returned, and for the Volscian people to be accorded equal civic rights with citizens of Rome. He gave the Romans thirty days to respond, then withdrew his forces.

He went on to attack more allies of Rome, capturing seven more cities, and ravaging their territories. The Romans didn’t come to their aid either, but sent more ambassadors to negotiate with Coriolanus, who merely gave them another three days to accept his previous demands. Rome then sent all its priests and religious people to try to persuade Coriolanus to relent. This too failed to change his mind, and the Romans decided to defend their city against imminent attack.

In Rome, Valeria, sister of the statesman Publicola, led a delegation of women to Volumnia, Coriolanus’ mother, where they also found his wife Vergilia. Valeria begged Volumnia and Vergilia, with her children, to join her and the other women in going to Coriolanus to plead with him not to attack Rome. They did so, and met Coriolanus in the Volscian camp.

After his mother had put their case to him, Coriolanus stood silent for a long time. Finally, he agreed that he and the Volscians would march away without attacking Rome; as he put it, he had been vanquished not by Rome, but by his own mother. He sent the women back, and ended the war. It is this extraordinary scene, in Act V Scene III of Shakespeare’s play, which has been painted so extensively.

More than a century before Shakespeare, this woodcut showing Veturia and Volumnia confronting Coriolanus (c 1473) appeared in a German translation of Giovanni Boccaccio’s De mulieribus claris.

It was perhaps Poussin who was the first to recognise its visual narrative, in Coriolanus Begged by his Family from about 1652-53. Under the shadow of the massive walls of the city, Coriolanus is symbolically drawing his sword, to show his intent to attack Rome.

To the left are Volumnia, Vergilia with at least two of their children, Valeria (standing, in ultramarine blue), and four other women (with a Roman soldier escort) all reaching out to the warrior. Just in case there is any doubt, Poussin provides an inscribed tablet in the foreground.

A century later, Angelica Kaufmann’s more intimate Coriolanus, his Mother Veturia and his Wife Volumnia, Belittling him to Give up War (1765) has both mother and wife looking straight at Coriolanus, their hands also speaking eloquently.

This story attained peak popularity in the late eighteenth century, when Heinrich Friedrich Füger, for instance, drew Coriolanus Implored by his Family to Spare Rome.

At some time after 1771, Joseph-Marie Vien added a young infant, in The Family of Coriolanus, suggesting that at the time of his banishment, Coriolanus’ wife was pregnant.

I presume that this painting by Franz Anton Maulbertsch, Coriolanus at the Gates of Rome from about 1795, was an oil sketch for a finished work which I have been unable to locate. Although it includes a subtle reference to the earlier award to Coriolanus of a horse, and there is impending drama in its sky, I’m not sure that many would recognise the gates or walls of the city of Rome.

Richard Westall’s Volumnia Pleading with Coriolanus Not to Destroy Rome (1800) is another account which makes excellent use of direction of gaze to tell the story: all eyes are fixed on Coriolanus, who is looking away to the heavens in the hope of a divine solution.

The last painting which I have found showing this scene is Soma Orlai Petrich’s Coriolanus from 1869. This draws sharp contrast between the central group of women and children, huddled together and pleading, with the Volscians to the right who are drawing their weapons. Coriolanus sits between them, pondering his decision, his sword shown prominently still in its scabbard.

When Coriolanus returned to Tullus at Antium, the Volscian leader plotted to remove him immediately. Coriolanus was killed, though without the support of the majority of the Volscians, who gave him an honourable burial commensurate with his military rank. When the Volscians did attack Rome, they were defeated and Tullus himself was killed. As a result, they became its subjects rather than citizens.