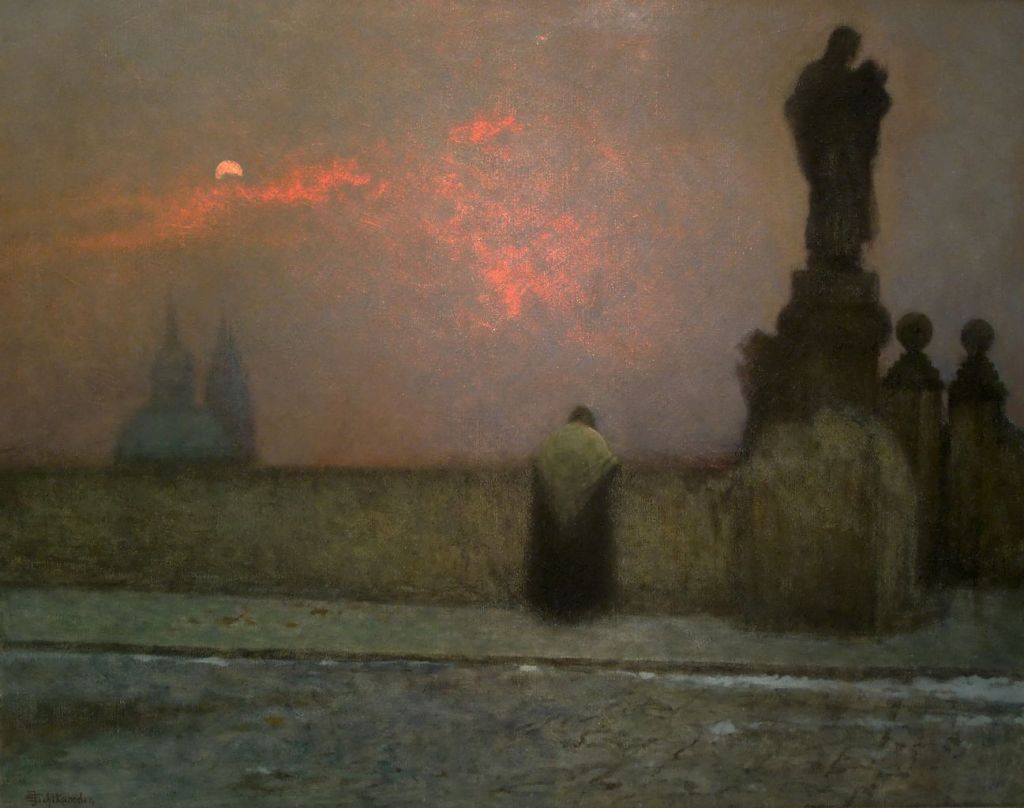 Those who followed the Impressionists with newer styles of painting seldom seem to have skied, but several painted some of the most wonderful and radically innovative skies to be seen on canvas. In this article, I show a selection of my favourite and most intriguing skies featured by those artists.

In the last two years of Vincent van Gogh’s life, he painted some truly unique skies, the like of which hadn’t been seen before, or since. His nocturne Starry Night over the Rhône from 1888 is a landmark work in this respect, with its starbursts against heavily-applied deep blues which are reflected back on the broken water.

Some of van Gogh’s less well-known paintings from this period are also dominated by their sky, here Coal Barges (1888) with its halfway horizon and streaks of coloured clouds.

In the summer of 1889, his several variations of Wheat Field with Cypresses feature low horizons below skies of swirling forms which start to integrate with similar brushstrokes in the hills and vegetation. Unlike most of the other Post-Impressionist paintings here, this early sketch is thought to follow the plein air tradition, and may even have been completed in a single sitting in front of the motif.

In his Road with Cypress and Star (1890), van Gogh finally integrates the facture of the sky with that of the rest of the painting, in its swirling brushstrokes.

Edvard Munch’s The Scream, seen here in its first version of 1893, is another famous instance of a Post-Impressionist work with a memorable sky. In this case, its blood-red sunset has evolved over a series of previous paintings developing the theme of emotional anguish. The artist explained the importance of the sky in his notes he made about its origin:
“I was walking along a path with two friends. The sun was setting. I felt a breath of melancholy. Suddenly the sky turned blood-red. I stopped and leant against the railing, deathly tired, looking out across flaming clouds that hung like – blood and a sword over the deep blue fjord and town. My friends walked on – I stood there trembling with anxiety, and I felt a great, infinite scream pass through nature.”

In 1903, Gustav Klimt spent his summer holiday at Attersee with his partner’s family, where he painted this landscape of an Approaching Thunderstorm (1903). Many of his other landscape paintings made during his summers away show no sky at all, but this is an exception.

Like Vincent van Gogh, Paul Cézanne’s late paintings incorporate the sky in the same facture, in his case constructive strokes. His Banks of a River from 1904 builds its sky using these characteristic patches of stroked colours as seen in the rest of the landscape. Overlapping of patches reveals that much of this was painted wet-on-dry, confirming that this was completed over a period of at least a week or two, and not in a single plein air session.

Jakub Schikaneder’s In the evening in Hradčany (1909-13) shows a spectacular winter dusk in this district of the city of Prague. In the distance are the twin spires and tower of St Vitus’ Cathedral, suggesting this view is on the Čechův Bridge over the Vitava River.

Edvard Munch’s The Sun from 1910–11 is very different from his paintings of the 1890s. It shows the sun recently-risen over the sea, viewed from a point high above a Norwegian country valley. Its sparse application of paint and geometric arrangement of rays and arcs is reminiscent of the work of William Blake.

Egon Schiele’s Autumn Tree in Stirred Air (Winter Tree) (1912) is often seen as one of his most abstract paintings, but remains firmly representational. It shows a bent and twisted tree, barren of leaves, against unusual cloud formations known locally as ‘snow lights’ because they indicate imminent snowfall.

The young Canadian painter Tom Thomson was well-known for dashing off lightning oil sketches such as Thunderhead (1912-13), in which he captures a passing thunderstorm en plein air, and in real time.

The Belgian Neo-Impressionist Théo van Rysselberghe had abandoned ‘Pointillism’ in 1910, and the following year retired to paint in the South of France. His colours became intense, as shown in his Large Tree near the Sea from 1919, in which his marks have become less regular, and his horizon relatively low, ensuring a generous sky.

My final two examples are drawn from even later in the twentieth century, and are both based on experiences during the Second World War of the British Surrealist Paul Nash.

The startling distant view in Nash’s Battle of Britain (1941) incorporates many elements of air warfare, including vapour trails (contrails), smoke marking the spin and crash of a downed aircraft, formation flight, and defensive airships. Below this action are the low hills, estuary, and a winding river typical of much of the English south coast.

In Flight of the Magnolia (1944), a magnolia flower unfurls into the sky high above a low coastal landscape. Those vast, soft petals are set against a background of equally huge leaves, and beyond them a field of cumulus clouds so typical of an English summer. Those below the flower have heaped up to generate a shower in the far distance.

In an essay the following year, Nash explained that the Second World War had changed his perception of the sky:
When the war came, suddenly the sky was upon us all like a huge hawk, hovering, threatening. Everyone was searching the sky, expecting the terror to fall: I among them scanned the low clouds … hunting the sky for what I most dreaded in my imagining. It was a white flower. Ever since the Spanish Civil War the idea of the Rose of Death, the name the Spaniards gave to the parachute, had haunted my mind, so that when the war overtook us I strained my eyes always to see that dreadful miracle of the sky blossoming with these floating flowers.