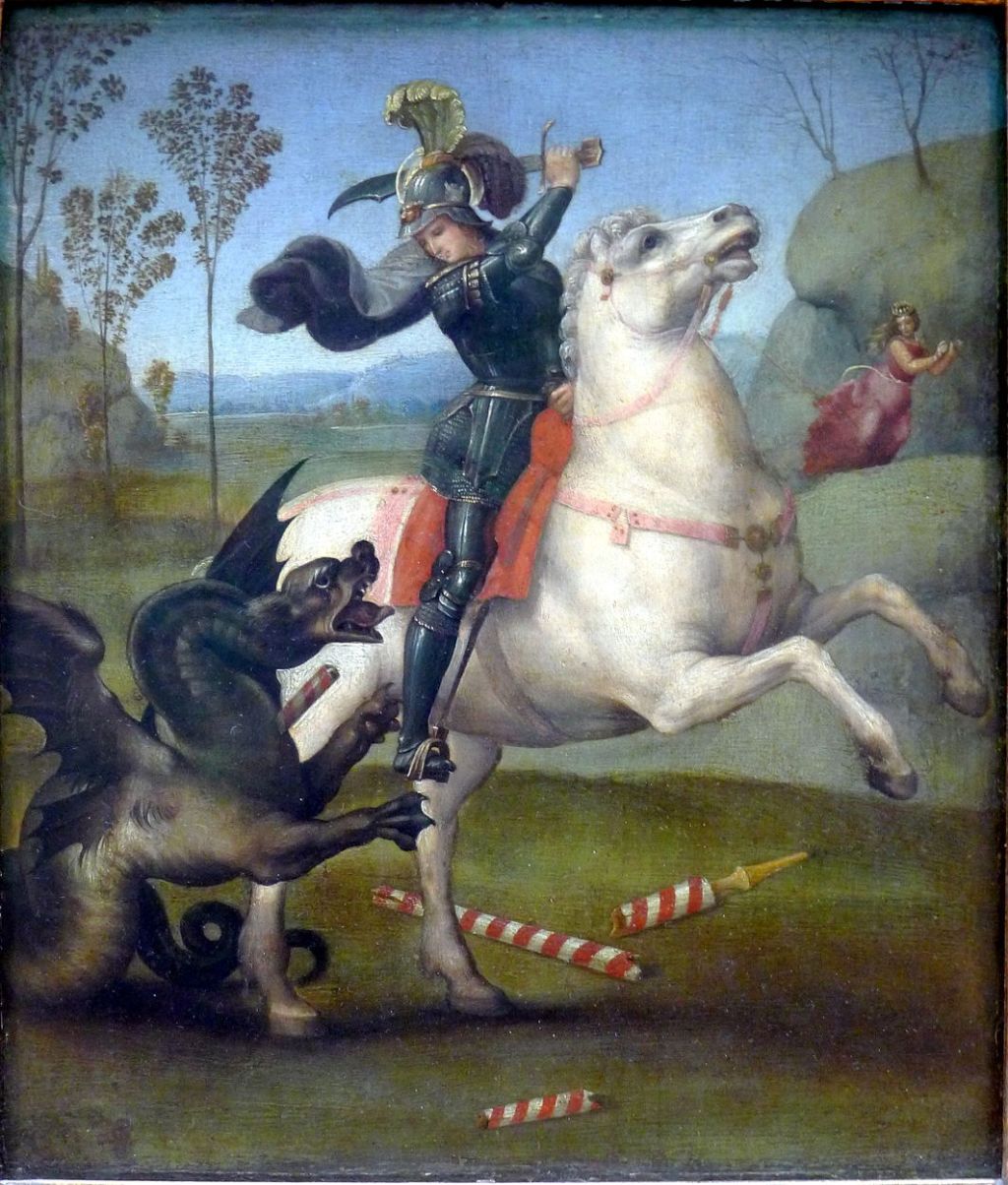 Pull up an illuminated mediaeval map, and where its author runs out of knowledge you’ll see drawings of fearsome beasts bearing the legend hic sunt dracones – here be dragons. This long weekend I look at a selection of these mythical creatures, starting today with the dragon, broadening to monsters more generally tomorrow, and on Sunday looking at orcs and other sea monsters.

In the classical world, a dragon was usually a huge serpent, long in the body and covered with scales. In mediaeval times, it seems, it acquired legs, wings and started breathing fire. Depictions of dragons became elaborated into complex beasts which could put up a real fight with the most valiant of knights.

One of the well-known dragons of the classical world was that which guarded the Golden Fleece, which had to be overcome for the hero Jason to steal the fleece. Gustave Moreau’s painting of Jason from 1865 refers to that narrative. When Jason reached Colchis, he underwent a series of trials imposed by King Aeëtes, culminating in Jason’s victory over the dragon which guarded the Golden Fleece. These were accomplished with the help of Medea the King’s daughter, shown here standing in his support, in return for a promise of marriage. Jason feet are on the body of the dragon, which looks more like a large bird of prey than a serpent.

Another popular story from classical myth is that of Cadmus, the founder and first king of the ill-fated city of Thebes. Just before he started to build that city, some of his men were devoured by a dragon.

Cornelis van Haarlem’s Two Followers of Cadmus Devoured by a Dragon from 1588 shows a very dragon-like monster killing and eating two of the men. Look carefully into the distance, though, and you’ll see the same beast being impaled by Cadmus with his javelin: it thus uses multiplex narrative to show two distinct moments of time in the same image.

Hendrik Goltzius’ Cadmus Slays the Dragon (1573-1617) is one of the finest paintings I have seen of spirited dragon-slaying. While one of the beast’s three heads (a slight exaggeration from the myth) gets on with eating its victim, the hero is thrusting his spear deep into the throat of another head. There are some apocryphal arrows embedded in the monster’s body, but the overall account is true to that in Ovid’s Metamorphoses.

Dragons are also a feature of the Bible, at least as passed on in translation.

William Blake’s The Great Red Dragon and the Woman Clothed with the Sun (c 1803) depicts events told in the book of Revelation chapter 12 verses 1-4:

And there appeared a great wonder in heaven; a woman clothed with the sun, and the moon under her feet, and upon her head a crown of twelve stars: And she being with child cried, travailing in birth, and pained to be delivered. And there appeared another wonder in heaven; and behold a great red dragon, having seven heads and ten horns, and seven crowns upon his heads. And his tail drew the third part of the stars of heaven, and did cast them to the earth: and the dragon stood before the woman which was ready to be delivered, for to devour her child as soon as it was born.

This is one of Blake’s best-known visionary images, a unique chimeral beast with body parts drawn from human, dragon, and caprine sources.

Blake’s sequel The Great Red Dragon and the Woman Clothed with the Sun (c 1805) continues with Revelation chapter 12 verses 12-17:

Therefore rejoice, ye heavens, and ye that dwell in them. Woe to the inhabiters of the earth and of the sea! for the devil is come down unto you, having great wrath, because he knoweth that he hath but a short time. And when the dragon saw that he was cast unto the earth, he persecuted the woman which brought forth the man child. And to the woman were given two wings of a great eagle, that she might fly into the wilderness, into her place, where she is nourished for a time, and times, and half a time, from the face of the serpent.

In Christian culture, by far the most popular legend of dragons is that of Saint George, which has been a consistent favourite with painters.

Raphael’s Saint George and the Dragon from about 1502-03 is thought to have formed a diptych with its companion piece Saint Michael and the Demon. Here Raphael combines all the key elements to tell this well-known legend: Saint George is about to deliver the fatal blow to the fearsome dragon, with the Princess keeping a safe distance. Under the saint’s horse are the shattered remains of a jousting lance.

Around 1553-55, Tintoretto retold this story in his small masterpiece of Saint George and the Dragon. The saint, the dragon and the Princess have escaped the confines of his earlier votive painting of this motif, and here run free in a rich green coastal landscape of the artist’s invention.

George is locked in battle with the dragon and the Princess flees from the scene in terror. The dragon’s last victim still lies on the grass, his blue clothing in tatters. Above them and the massive walls of a distant fortress is the figure of God, in a brilliant mandorla in the heavens.

At the end of the 1880s, Gustave Moreau made this relatively conventional oil painting of Saint George and the Dragon (1889-90), one of his few narrative paintings to show a traditional climax in the story, and the moment of peripeteia. The king’s daughter, who was to have been fed to the dragon, is seen perched above the gorge, praying, with her father’s castle behind in the distance.

Saint George has just impaled his lance into the dragon as he gets the better of the beast. In the traditional legend, George then calls to the princess to throw him her girdle, which he uses to capture and harness the dragon so he can lead it around.

Briton Rivière’s treatment of Saint George and the Dragon, painted before 1914, is more unusual. The victorious knight lies back exhausted with his sword still in his right hand, looking up to heaven, with the enormous lizard-like body of the dragon dead at his feet. But wrapped up in the coil of its tail is the saint’s black horse, another victim of the battle. Neither is there any sign of the princess.

Renaissance literature had its fair share of dragons too. One good example is the beast which tries to stop two of Rinaldo’s companions who have come to rescue him from the clutches of the sorceress Armida, in Torquato Tasso’s epic Jerusalem Delivered.

Nicolas Poussin’s The Companions of Rinaldo (c 1633-4) shows Carlo and Ubaldo confronting this dragon during their quest to locate and rescue Rinaldo. Carlo stands in the centre with his sword ready to tackle the beast, but Ubaldo behind him leaves his weapon in its scabbard and brandishes a golden wand instead. In the background at the left is the magic ship in which they sailed, and standing in its prow is the maiden who steered it.

Most recently, dragons have appeared in fantasy paintings, such as Georg Janny’s The Dragon’s Cave from 1917.