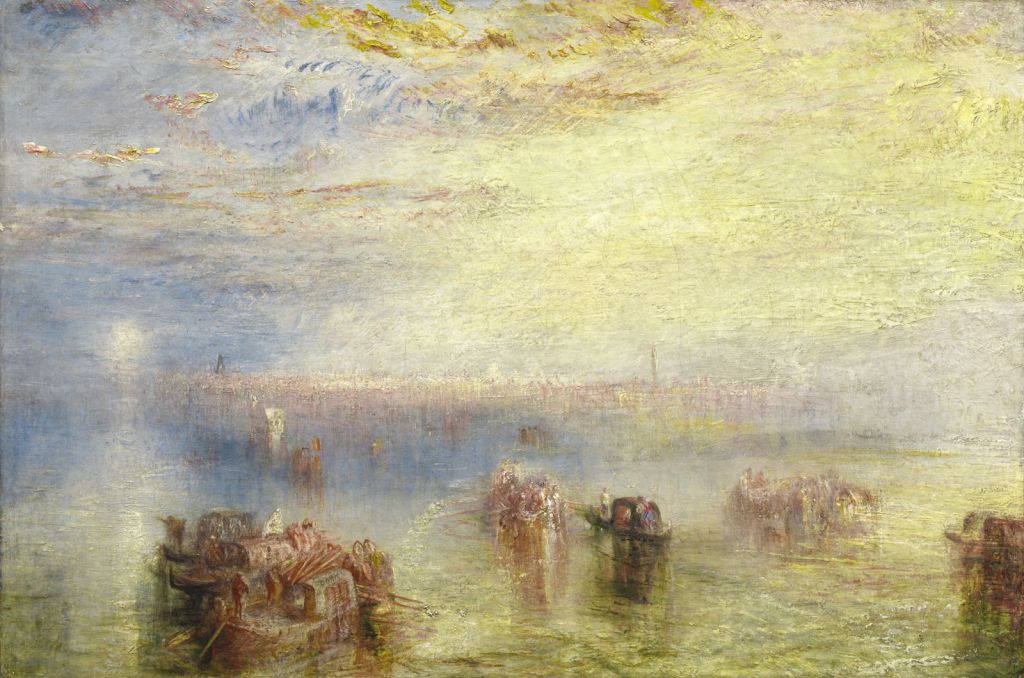 As you might expect, JMW Turner’s approach to skies was quite different to that of his great rival John Constable. I can find no record of Turner engaging in skying in the way that Constable did in the 1820s, but that doesn’t mean that Turner neglected sky studies, not by any means.

One of the problems facing us in working out what Turner did by way of sketching is the sheer volume of his archives. Most of his sketchbooks are filled with his topographical sketches, and seldom reveal any specific sky studies. Although his oil sketches are less well-known, several are dominated by their skies, and where they’re accessible, I have included a representative selection here.

When Turner was making the transition from watercolour topographical views to finished oil paintings, skies were often a dominant feature. His Fishermen at Sea from 1796 shows small fishing boats working in heavy swell off The Needles, on the Isle of Wight, and was his first oil painting to be exhibited at the Royal Academy.

He was following a vogue for nocturnes which had been established by British painters in the late eighteenth century, and like Vernet used the colour contrast between the moon and the relatively feeble lantern in the boat shown in the centre foreground. The horizon is well below the middle of his canvas, and the night sky above vies for the viewer’s eye with the fishing boats and waves below.

His Seapiece with fishing boats off a wooden pier, a gale coming in is an oil sketch made on a relatively small panel which looks to have been a study for another maritime scene in stormy weather off the coast of England. Turner was already using sgraffito, which may have been made using a knife, brush handle, or even his fingernails.

In 1802, Turner turned his attentions to the European continent, in the lull between the French Revolution and the Napoleonic Wars. He crossed from Dover to Calais, the shortest route but often a rough one, and caught the sea when it was less comfortable. He painted this scene of his arrival in France in Calais Pier, with French Poissards preparing for Sea: an English Packet arriving in 1803. Although this didn’t fare as well at the Royal Academy, it’s again dominated by a sky which is as rough as the sea below.

Coast Scene with Fishermen and Boats (c 1806-07) is another oil sketch, showing what appears to be part of the Thames Estuary (to the east of London), and probably formed the basis for his later painting of Fishing upon the Blythe-Sand (1809).

The Fish Market at Hastings Beach (1810) shows a scene at Hastings, on the south coast of England, where a horse and cart has been taken out into the sea to carry fresh fish ashore. Its low horizon gives Turner ample space to show the sun ‘drawing water’, and some bright white seagulls against the grey cloud.

Inspired by his own experience of crossing Alpine passes, Turner’s sky in his radical Snow Storm: Hannibal and his Army Crossing the Alps from 1812 is among his most dramatic. He seems to have become so carried away by the towering indigo vortex of stormcloud that he almost forgot to show Hannibal’s famous elephants.

Turner’s watercolour of the Bell Rock Lighthouse from 1819 returns to a more topographic style with its careful architectural detail of this historic lighthouse. Situated on the east coast of Angus, Scotland, it is the world’s oldest surviving lighthouse which is washed by the sea, rather than on dry land. The waves of the sea are echoed in the clouds, as a bolt of lightning crackles its way down an erratic path.

At least two of the series of Petworth Park that Turner was commissioned to paint around 1828 feature low horizons, extreme panoramic formats, and Impressionist sunset skies. This is Petworth Park: Tillington Church in the Distance, whose title omits any mention of its dominating light or sky.

By the 1830s, Turner’s skies were evolving further and becoming more ethereal. In his large Wreckers – Coast of Northumberland, with a Steam-Boat Assisting a Ship off Shore from 1833-4, the clouds are vaguer in form and are less distinct from the wild sea.

Turner’s nocturne Keelmen Heaving in Coals by Moonlight from 1835 shows well how far his style and skies had progressed in nearly forty years, since his first success at the Royal Academy. There’s no romantic chiaroscuro here, and the sky is bright in the moonlight.

Although Breakers on a Flat Beach (1835-40) appears to be an oil sketch, Turner used a large canvas of 121 by 90.2 cm (4 by 3 feet), which is unusual for a plein air study. Its clouds are reminiscent of Constable’s skying of more than a decade earlier, and like his rival, Turner probably painted this on the south coast of England.

The Fighting Temeraire tugged to her last Berth to be broken up from 1839 is one of Turner’s most famous late paintings, its twilight sky balancing the ships on the left. This has evolved from his Petworth series.

In Turner’s equally famous Slave Ship from 1840, he silhouettes the vessel against a threatening blood-red sky.

In Snow Storm, Steam Boat off a Harbour’s Mouth from 1842, Turner’s cloudforms continue to dissolve into vortices of colour and light, which have come to replace the more linear streamlines used by most other landscape painters.

His skies reached their zenith in the series of views of Venice which he painted during his last decade, which I think strike a better balance between vagueness of form, colour and light, and closely-observed depictions of cloud.

Campo Santo, Venice (1842) resolves from blurry masses of cloud at its edges to fine structure at its centre, raising the spirits high as the day is starting among the boat people of Venice.

Turner does the same with clouds and buildings in The Dogano, San Giorgio, Citella, from the Steps of the Europa, from the same year.

Finally, his Approach to Venice from 1844 uses very thin transparent glazes of colour over thick white impasto to create a distinctive flickering effect in its highlights. It also returns to the warmth of a Petworth twilight.

Turner may not have painted any ‘pure’ skies, and most of these were products of his studio rather than being made en plein air. Each of these marvellous skies is an integral part of a landscape view, in which there are foreground details and terrestrial objects in the middle distance. But each also features a sky which is rich in colour, full of light, and a good thirty or forty years ahead of anything else painted by a landscape artist in Europe.