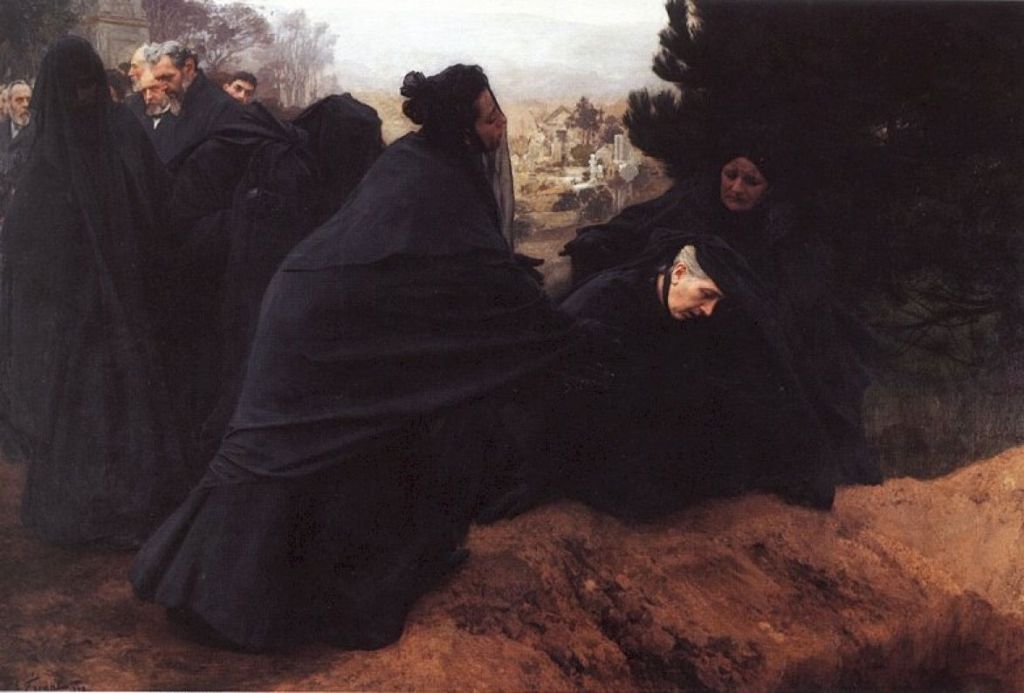 In the first of these two articles, I showed Courbet’s huge masterpiece A Burial at Ornans (1849-50). One of the most influential paintings of the nineteenth century, historical events delayed others responding to it, as France went through a turbulent period in politics culminating in the Franco-Prussian War. As the Third Republic developed from that, social realism transformed into Naturalism, and scenes of funerals in the country became popular.

Léon Frédéric’s undated Burial of a Farmer is very different, showing a procession of mourners at a village funeral in the Ardennes in the winter. Leading the ranks at the left are the farmer’s widow, mother and small son, and following are other close relatives and most of the rest of the local people. The combination of mourning dress and snow make this appear almost monochrome, relieved only by three children at the right and the occasional glimpse of other garments.

That may have been followed or accompanied by Funeral Meal from 1886, in which a large group of mourners have sat down outside in the summer sunshine to remember the deceased following the funeral. Frédéric’s composition, looking down the length of the table at the level of the heads of those seated around it, brings a marvellous succession of heads and hands to the right of the painting.

At about the same time, Erik Werenskiold painted a rural Norwegian response in his Peasant Burial of 1885. There’s no crowd here, just a handful of men and one woman led by a young priest. Beyond them a winding green valley and distant peaks still bearing the snows of the previous winter.

In the cities, the popular and famous left this world in greater style.

Alfred Roll’s evocative painting of The Funeral Of Victor Hugo (1885) is set in Paris, and shows the procession from the Arc de Triomphe, accompanied by more than two million people. Following Émile Zola’s death in 1902, he was interred in the same crypt within the Pantheon.

Enrique Simonet’s unusual painting of The Burial of Saint Lawrence (1886) is an early work in very painterly style. Saint Lawrence was one of the seven deacons of the early Christian church in Rome. He is claimed to have been buried at what is now the site of the minor basilica of San Lorenzo fuori le Mura, following his execution in Rome.

Naturalist paintings of funerals continued with Émile Friant’s Sorrow (1898), set in a municipal cemetery. This provides a very intimate study of the grief of a widow, who is being helped by two younger women. Their overt reactions contrast with the cluster of men, with their stern beards, at the left.

As Naturalism faded around the turn of the century, it was Edvard Munch who included a funeral among the closing paintings of his Frieze of Life cycle.

Probably the least-known painting in Munch’s Frieze, the artist completed two versions of Hearse on the Potsdamer Platz in 1902. These depict a horse-drawn hearse in this famous square in the heart of Berlin. Amid its bright hues is the hearse, covered in a black pall, and drawn by a single black horse.

Funeral Symphony 6 (1903) is the sixth in a series of paintings made by Mikalojus Konstantinas Čiurlionis at the start of his career. Like many of his paintings, it takes its title from music, and perhaps should be seen as a movement rather than a single image.

Back in rural Norway, Nikolai Astrup recorded the public rites of the community, as in his Funeral Day in Jølster (before 1908). With the grandeur of the hills behind, a small party escorts the coffin of one of the villagers. The artist’s father, the pastor, leads the procession to the small churchyard.

Finally, here’s a glimpse of one of the obsessions of the nineteenth century: the fear of being buried while still alive.

After his mother’s death, the eccentric artist Antoine Wiertz became increasingly obsessed with death. Premature Burial (1854) visits a not uncommon dread in the nineteenth century: that of being presumed dead, buried, then recovering to find yourself in a coffin.

This did happen, particularly during cholera epidemics, as indicated by the lettering on the opening coffin. The profound shock resulting from choleric dehydration could make the pulse and breathing so feeble as to escape detection; with hundreds or thousands of dead, many were dumped hurriedly into mass-produced coffins and so into mass graves. And a very few managed to survive.

Coffins were designed with bells which could be rung by a recovered person. Wiertz’s victim is left with the nightmare scenario of trying to make it back to the land of the living. There’s a terrifying thought for these troubled times.