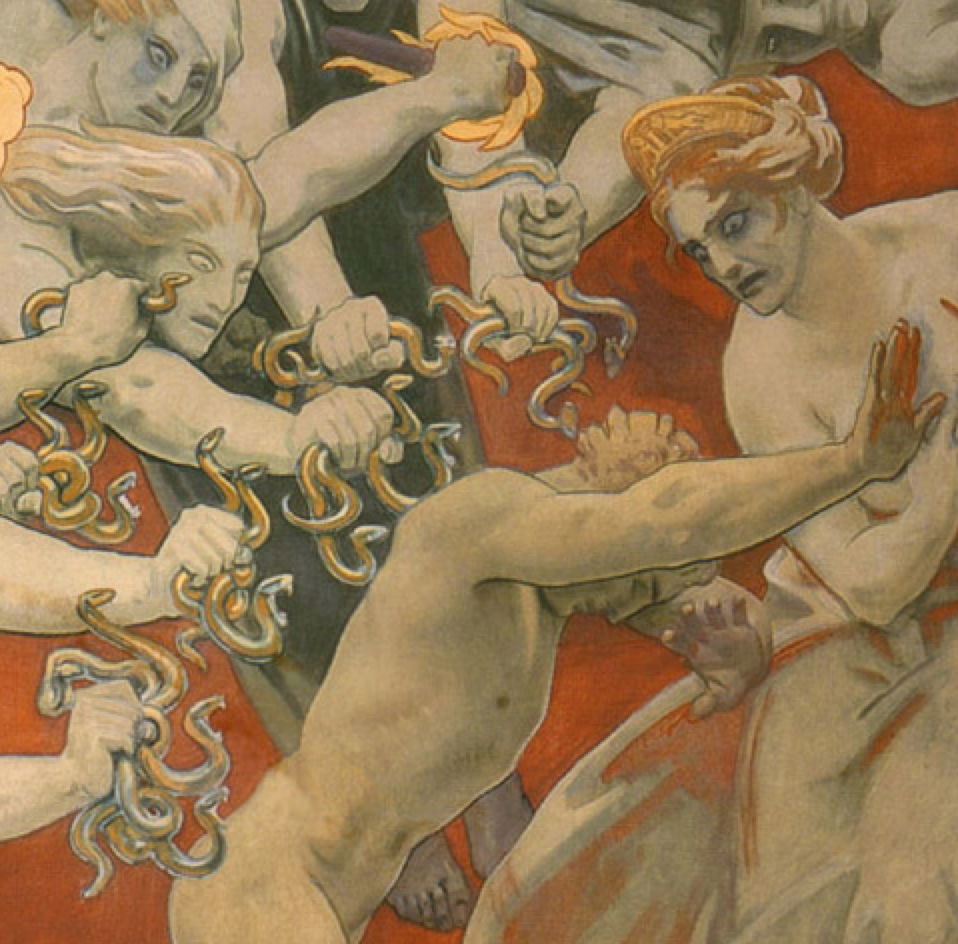 The sister goddesses no one wanted to come across were the Erinyes (Ἐρινύες, plural of the Greek Erinys Ἐρινύς), or to the Romans the Dirae – the Furies. Although some held that they were daughters of Nyx (night), which would make them primordial deities, the more popular account was bizarre to say the least. According to Hesiod, Cronus the Titan castrated his father Uranus, and the Erinyes arose from the drops of his blood which fell on the earth, the primordial goddess Gaia.

Originally, they were without number, but Virgil later confined them to three named Alecto, Megaera and Tisiphone, which mean respectively endless, jealous rage, and vengeful destruction, giving a flavour of their characters. They became associated with the punishment of moral crimes such as anger, those who broke their oaths, and murderers, respectively. If you did almost anything bad or immoral, you had better fear the Erinyes and their dogged pursuit of offenders.

Much of the time, though, when not tormenting the guilty, the Erinyes slept, in readiness for their next victim.

Some associated them with the underworld, as seen in Jan Brueghel the Elder’s Juno in the Underworld (1596-98). In the detail below, Juno’s cool blue robes and a couple of peacocks stand out from the reds and browns, the monsters and the tormented. She waves at the trio of Furies, with their snake-filled hair and screaming faces, which are characteristic of their depictions.

They are among the first figures which Dante and Virgil encounter after being ferried across the River Styx to land at the gate of the city of Dis, the lower depths of Hell, in the Divine Comedy. That gate is slammed shut on Virgil when he goes forward to secure their admission, as Dante’s eyes are fixed at the top of the gate, where the three Furies appear, wreathed in snakes. Virgil then names them to Dante, as shown in John Flaxman’s version above, and the later engraving from Gustave Doré’s design, below.

When Gustav Klimt painted his series for the Great Hall of Vienna University in 1907, he included the Erinyes on the canvas devoted to the Faculty of Jurisprudence. An octopus is embracing the bowed figure of a criminal, around whom are three Erinyes, with the three personifications of truth, justice, and law looking on from the background. Tragically, this painting was destroyed by fire in 1945.

By far the best-known stories involving the Erinyes are told in Aeschylus’s Oresteia. This trilogy of plays traces the run of murders and tragedy in the lives of Agamemnon, the King of Argos and commander of the Greek forces which destroyed Troy, and his son, Orestes. These start before the first play, when the ‘fleet of a thousand ships’ is about to set sail for Troy. To ensure fair winds and weather, Agamemnon sacrificed his daughter, Iphigenia.

The first play, Agamemnon, tells of the return of the king to his wife, Clytemnestra, and her long-standing lover Aegisthus. They have been plotting to murder Agamemnon to avenge Iphigenia’s death, and secure the throne for Clytemnestra, which they do, also killing Cassandra his concubine.

Orestes, son of Agamemnon and Clytemnestra, returns home in the second play, The Libation Bearers, to avenge his father’s death some years later. Orestes then concludes that play by murdering his own mother and her lover Aegisthus. The third play, The Eumenides (one of the euphemistic names for the Furies), opens with the Furies hunting Orestes down, haunting and tormenting him to drive him mad, because of these murders.

In classical times, Aeschylus’ plays were very popular – they won first prize at the Dionysia festival in 458 BCE – and they and their derivative dramas and texts remain so, despite being unpopular during the Renaissance. Among the more notable derivatives are Eugene O’Neill’s Mourning Becomes Electra, and Sartre’s The Flies.

Louis Lafitte’s beautiful finished drawing of Orestes Pursued by the Furies (1790) was exhibited at the Salon in 1791. Orestes is seen trying to sleep on a couch, when four Furies visit him. Immediately above him is a Fury armed with a dagger, and to the right two other winged daemonic Furies are carrying the spirit of Clytemnestra, whom he murdered. Lafitte has worked fine detail with his chalks to produce a drawing which is evocative of some of the best work of his contemporary Henry Fuseli.

Philippe-Auguste Hennequin’s The Remorse of Orestes (1800) is very complex, and uses the Furies as a tool for showing multiplex narrative. Orestes is at the left, the centre of attention, and his right arm is holding a woman, who I suspect is his sister Electra. He is under attack by a small army of Furies and spirits, including the murdered body of Clytemnestra, on the floor, and I think Agamemnon too. There is a profusion of arms – reaching out, grasping, tugging.

By the middle of the nineteenth century, this scene from the Oresteia was becoming more popular with painters. Carl Rahl’s Orestes Pursued by the Furies of about 1852 is more faithful to the original play in showing three clearly fearsome if not murderous women attacking Orestes with their burning brands and daggers. The hair of the Furies is seen to contain small snakes, following one of the classical descriptions which makes them visibly similar to Medusa the Gorgon.

The first really well-known painting of this scene was William-Adolphe Bouguereau’s Orestes Pursued by the Furies (also known as The Remorse of Orestes) from 1862. Three Gorgonic Furies are wailing and screaming at Orestes, and carry the murdered corpse of Clytemnestra, with Orestes’ dagger still buried deep into her chest.

Gustave Moreau’s Orestes and the Erinyes of about 1891 was painted late in his career, and is reminiscent of his earlier paintings of Salome in about 1876. Orestes is shown, still clutching his bloody sword from the murder of Clytemnestra, leaning in the foreground of an ornate temple. Above him are three saintly figures: not so much the fearsome Furies, more like the dead themselves, haunting him. There are still snakes uncoiling themselves from their feet, though.

Franz von Stuck re-arranged the figures from Bouguereau’s work, in his Orestes and the Erinyes (1905). The Furies now tumble and spin through space, haunting Orestes as he tries to run away from them.

John Singer Sargent’s large masterpiece Orestes Pursued by the Furies was started in 1922, and completed in 1925, just prior to his death. Over its 100 square feet of canvas, it shows a young and naked Orestes cowering under the attacks of the Furies, as he tries to run from them. The swarm of no less than a dozen fearsome Furies have daemonic mask-like faces, blond hair swept back, and hold out burning brands and fistfuls of small snakes.

Sargent has gilded the flames on the brands, which makes them shine proud, just like fire. The isolated woman who stands in Orestes’ way is no Fury, though: she wears a gilded crown, and with the clean incision of a stab wound above her left breast can only be his mother, Clytemnestra. As with Hennequin’s earlier painting, Sargent shows a profusion of arms, eight of them clutching snakes and thrust in Orestes’ direction. It must be one of the greatest narrative paintings of the twentieth century.

Couldn’t we do with some Furies today, to torment those who break their oaths?