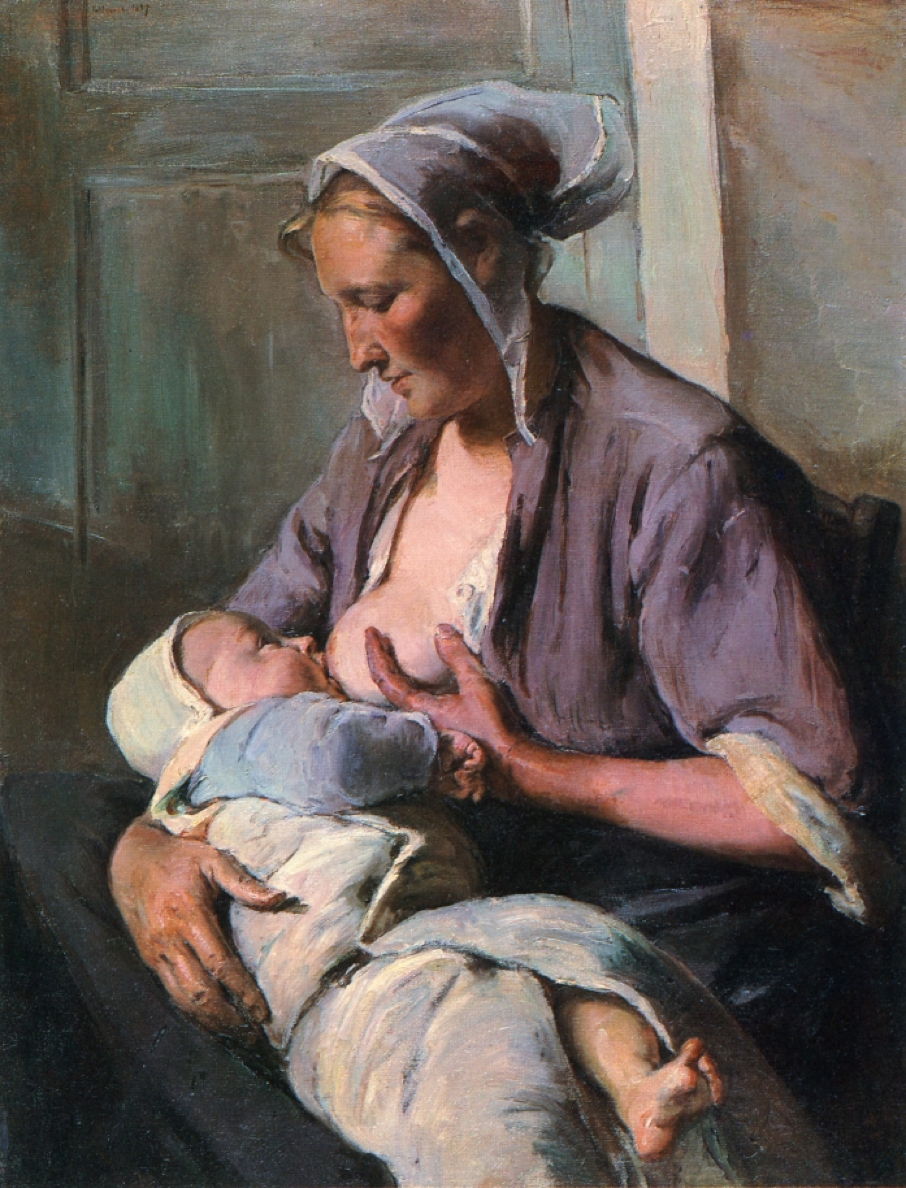 Towards the end of the nineteenth century, the social Realist and Naturalist concerns of showing the poor struggling to raise their families were forgotten. Instead, artists came to give us more tender and intimate insights into their own families, and those of others.

In 1884, a year after they married, Karin Larsson had their first child, shown in husband Carl’s intimate pastel double-portrait of A Studio Idyll. The Artist’s Wife and their Daughter Suzanne from 1885. Mother and child are sitting in his studio. A talented artist in her own right, after their wedding, Karin Larsson concentrated on interior design, and was responsible for most of the household interiors shown in her husband’s later work.

When Pierre-Auguste Renoir’s family was arriving and growing up, he painted several works showing its members. Maternity from 1885 is remarkably informal and a touching record.

Mary Cassatt specialised in painting and making prints of children. When she was mastering drypoint technique in about 1887, she made this fine print of Baby’s Lullaby. Although this looks like a drawing, it is in fact the second of four states made from the plate.

Within just a few years, Cassatt was producing magnificent work such as her famous The Bath (c 1891).

William Merritt Chase was another devoted family man who painted his wife and children at many stages of their lives. This shows his wife Alice holding the first of their eleven children, Alice Dieudonnée, nicknamed Cosy.

The last of the paintings by Virginie Demont-Breton that I have included is another which is well-known, but not in this original version of L’homme est en mer (The Man is at Sea) from 1889. This shows a fisherman’s wife warming herself and her sleeping infant by the fire, while her husband is away fishing at sea. It was exhibited at the Salon in 1889, where it was rapidly engraved for prints.

Later that year, Vincent van Gogh saw an image of that painting when he was undergoing treatment in the Saint Paul asylum at Saint-Rémy, and made a copy of it, which I show below.

Paintings of the ages of women are not uncommon, but Pierre Bonnard’s Three Ages (Maternity) from 1893 is one of the more unusual for its inclusion of an infant, together with mother and grandmother, and his thoroughly Nabi treatment.

Close reading of Elizabeth Nourse’s superb Motherhood from 1897 reveals that the mother here isn’t a conventional subject either: her face is tanned from outdoor work, and her hands have clearly toiled long and hard in the soil.

Christian Krohg and his family spent the summer of 1889 in the coastal resort of Åsgårdstrand, about sixty miles (100 km) south of Oslo, Norway. The Krohgs’ son Per, their second child, was born there that summer, and was almost certainly the model for In the Bathtub (1889). This shows the near-ceremonial of the bathing of a newborn baby, with the mother and women relatives providing endless advice, even taking the event over.

Of the Symbolists at the turn of the nineteenth and twentieth centuries, it was Léon Frédéric who painted mothers and their babies. In his Allegory of the Night from about 1900, a dark-haired mother holds twin infants to her chest under a starry veil. She is probably the goddess Nyx, and the twins either Aether and Hemere (Brightness and Day), or Thanatos and Hypnos (Death and Sleep).

Frédéric’s major work of 1900 was a grand triptych of The Golden Age, from which the left panel represents Morning. Here he forgets the rural poverty of his earlier works, and shows an idyllic countryside. Young babies fly through the air, as if falling from heaven, only to latch on and feed at the breast. The men are leisurely tending to the livestock in eternal spring sunshine. I suspect this appeared quite alien to mothers of the time.

Olga Boznańska’s Maternity (1902) is, in complete contrast, an intimate portrait of the bond between a mother and her young child.

Eliseu Visconti was a Brazilian Impressionist who trained at the École des Beaux-Arts and the Académie Julian in Paris, where he then became quite successful. He painted this tender double portrait in the year that he returned to Brazil and became professor of painting at the Escola Nacional de Belas Artes.

Lovis Corinth painted many fun and informal portraits of his wife, but the only work in which I have seen her with a baby is this rather starchy group portrait of The Artist and his Family from 1909. All dressed up for what may have been intended to be a more formal group portrait, Charlotte sits calmly cradling daughter Wilhelmine, then just five months old, as the artist seems to be struggling to paint them. Their son Thomas, aged five years, stands on a desk so that he can rest his hand on mother’s shoulder. I suspect this may have benefitted from a photographic reference.

The saddest painting of all is the last, from just before the twentieth century, as it marks what was coming in the loveless and clinical future.

Jean Geoffroy, the great painter of children, gives a chilling vision of the future in The Nursery from 1899. This is one of few paintings which shows contemporary approaches to the early rearing of children under the Third Republic. Hospitals developed a rigorous almost military approach to nurseries and feeding which endured well into the twentieth century, and separated mothers from their infants for much of the time.

So much for that vital first and deep bond of love.